My lab just published a somewhat provocative paper (still in unproofed form at this point) arguing that induced pluripotent stem (iPS) cells are very similar in some ways to cancer cells. iPS cells are stem cells that have almost exactly the same properties as embryonic stem (ES) cells, but without the controversy. Note that Dr. Shinya Yamanaka, discoverer of iPS cells, just won the 2012 Nobel Prize for Medicine.

How did we get to the conclusion that iPS cells are like cancer cells? In 2009 I wrote a review article for Stem Cells called "Deconstructing Stem Cell Tumorigenicity: A Roadmap to Safe Regenerative Medicine." In that article I mentioned something that had struck me about iPS cells. The process of making iPS cells is scarily similar to the process of creating so-called "oncogenic foci"(OF), a form of in vitro-created malignant sarcoma. OF assays were a staple in the early days of the cancer biology field and were used to make some key observations about tumorigenesis (in this case I mean specifically malignant tumorigenesis). They are still used today for tumorigenesis studies.

During OF assays you transduce fibroblasts with virus-encoding genes like Myc, SV40, mutant p53, and so forth. You let the cells grow without passaging, they become confluent, and colonies emerge that are called OF exhibiting anchorage-independent growth. If you inject the cells into immunodeficient mice, they form malignant sarcoma tumors.

During iPS cell production you transduce fibroblasts with virus-encoding genes sometimes including Myc or SV40 and inhibiting p53 function, all of which greatly stimulate iPS cell formation, which manifests as colonies forming. If you inject iPS cells into immunodeficient mice, they also form tumors, as do OF, but iPS cells form teratoma. A "secret" of the iPS cell field is that iPS cells also can form malignant teratocarcinoma at times in these assays.

Of course, these are not identical methods, but to me they seemed eerily similar.

It was about four years ago that we started a project in my lab to compare OF to iPS cells. One of the benefits of this approach was that we could start with the same fibroblasts, and depending on how we transduced them, they would either turn into iPS cells or OF, but each would be genetically identical (at least in theory, assuming no mutations along the way, and not counting the transduced transgenes). We did this, and we analyzed the transcriptomes of the OF and iPS cells. We generated two iPS cell lines and numerous kinds of OF, some which did not have Myc. Then we studied the cells.

The transcriptomes of OF and iPS shared some striking similarities in terms of downregulation of differentiation genes and some metabolic changes. There were also some differences such as the fact that, interestingly, only iPS cells turned on pluripotency genes. I had actually predicted that the cancer cells would turn on some pluripotency genes too (à la cancer stem cell hypothesis), but they didn't.

When we compared other labs' transcriptome data on their own homegrown iPS cells made from a variety of starting cells and with different sets of transgenes used to induce pluripotency, those other iPS cells were quite similar to our OF, too, and in much the same ways.

iPS cells and OF are most alike in that they both have shut off a bunch of differentiation-associated genes, suggesting the idea that induced pluripotency and malignant tumorigenicity share that requisite step of wiping the slate clean of differentiation genes.

iPS cells and OF foci also shared aspects of cellular metabolism. Below is an image of our model of how formation of iPS cells and cancer formation are related. 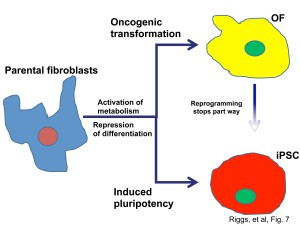 We found that OF could be converted into iPS-like cells by reprogramming factors, a process that intriguingly was particularly dependent on Nanog. However, the reprogrammed OF (ROF) did not make it back to a state of being exactly iPS cells, despite us trying several different ways to do this, suggesting that tumorigenesis may include events that impeded reprogramming.

So what does this mean in the big picture? I believe that iPS cells and cancer cells are, while not the same, close enough to be called siblings. As such, the clinical use of iPS cells should wait for a lot more study. Even if scientists do not use iPS cells themselves for transplants but instead use differentiated derivatives of iPS cells, the risk of patients getting malignant cancers cannot be ignored. (Some within the stem cell community were opposed to the message of this paper as it went through the review process.) At the same time as our work suggests caution for clinical use of iPS cells, our studies indicate possible ways to make iPS cells safer and support the notion of reprogramming cancer cells as an innovative new cancer therapy.

Even though iPS cells are not perfect (I outline the seven key challenges facing them here), I believe that Yamanaka's work clearly deserved the Nobel Prize, and his work is transforming the world. Congratulations to him and Dr. John Gurdon, who shared the prize with him. It will be fascinating to see how the iPS cell field continues to evolve and address its challenges.