The world's manufacturing superpowers -- Germany, Japan and China -- as well as every other advanced country except the U.K. have carefully thought out industrial policies. Why don't we?

In the US, the idea of industrial policy has been pushed on to the intellectual and political blacklist by free market fundamentalism. It is caricatured as government bureaucrats interfering with the workings of the market by ineptly trying to pick winning companies. The underlying assumption, an article of faith for true believers, is that an international free market exists and that, if only we would stop meddling, it will always produce the best possible results for our economy and our people. Anyone who disagrees is shouted down as an economic ignoramus or a socialist (think Soviet style central planning).

Thoughtful and well-constructed proposals for a US industrial policy (we should call it a "competitiveness" policy in the hope of sidestepping some of the prejudice against it) have also been put forward. One of the best and most innovative is for a Technology Based Planning System administered by a private non-profit United States Technology Strategy Board for use on a voluntary basis by US corporations, educational and research institutions, banks and venture funds, and to provide policy guidance to relevant governmental entities.

This approach was first developed as Project Socrates, a joint CIA-DIA effort led by physicist Michael Sekora aimed at developing technology, industrial, and trade policies to win the Cold War. Its key proposition is that competitive advantage, at the company or national level, comes from control of technologies that are critical to satisfying present and future consumer needs. From this perspective, strategic planning should start with a map of all important technologies showing how they relate to each other and to present and anticipated consumer needs. The entities where these technological capabilities reside: business, academic and government, are part of this techspace map. The techspace map is smaller for a particular company, larger for an industry and all-inclusive for the United States. In all cases it must include non-US companies, academic institutions and government entities.

Strategy is then developed to assure the availability, development and symbiotic interaction of critical technologies and to deny them to competitors. At the government level, this approach would inform trade policy -- what markets are important to protect and which not; educational policy -- what technologies should students be taught; the choice of what basic research to fund; and what interdisciplinary business consortia to authorize and encourage.

Building on the work of Project Socrates, Sekora's firm has expanded and automated the further development and updating of the techspace map using only publicly available information. They have also developed tools to navigate it, i.e., to identify the connections between technologies required to satisfy business and consumer needs, see where control of these technologies reside, identify alternative paths to meet these needs, and develop strategies to outmaneuver the competition.

This system is ready to be put to use on a national scale. To do so, a private non-profit entity, the US Technology Strategy Board, would be established to obtain, maintain and administer it. Although the Board's trustees would include representatives from relevant federal departments, they would not control it. The majority of trustees would be representatives from key participants in the US economy: each major industry; research institutes and universities; banks and venture funds; state education departments; and labor representatives.


The Board would license the Techspace Map and associated tools. It would convene meetings and otherwise educate potential participants from all relevant sectors about the system and how to use it. The system would give each business participant a broad and highly accurate view of the resources and vulnerabilities of its competition, potential strategies to outmaneuver it and where the resources required for these strategies reside. It would allow university researchers, educators, banks and venture firms, trade negotiators and other government participants to see and evaluate these strategies and what roles they could play in them. This visibility and accuracy would provide guidance to, and promote the development of. voluntary and productive symbiotic relationships between all categories of participants. 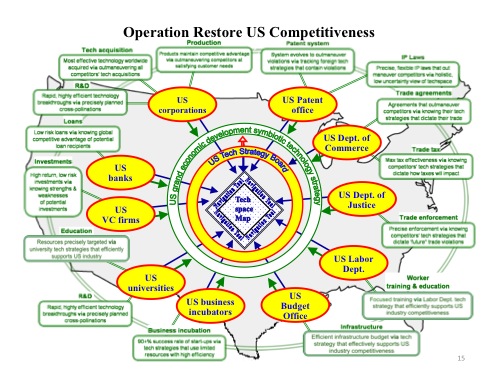 The Board would also use the system to develop a grand technology based competitiveness strategy for the United States. Participation in the strategy by corporations and all other non-federal institutions would be voluntary and be based on perceived self-interest. Modest fees charged for access to the system would allow it to rapidly become self-supporting.
The fact that our major competitors -- including countries that continue to capture our high value manufacturing industries -- are using and further refining planning systems similar to Project Socrates is sufficient reason to seriously examine and consider it for the US.

Founder and former Chairman, American Strategic Insurance Group, and member of the board of the Coalition for A Prosperous America.