While sales growth is a key gauge of how a business is doing, most entrepreneurs at the end of the day want to be able to generate a profit so they can invest in continued growth and take home a paycheck, among other things.

A healthy net profit margin, which represents how many cents a company keeps in profit for every dollar they generate in sales, is one component of being able to generate profits. Net profit margin shows how efficient a company is now and how efficient it may be as it grows. A strong net margin also provides a cushion in case sales drop off, so the financial metric is an important one in evaluating companies.

By and large, most industries have been generating average net profit margins in the black over the last 12 months, according to data from Sageworks, a financial information company.

The most profitable industries are throwing off margins in the teens, based on Sageworks' analysis of privately held companies across more than 1,000 industries.

Only one industry, continuing care retirement communities and assisted living facilities (NAICS 6233), produced negative profit margins, on average, in 12 months ended July 1, according to Sageworks' financial statement analysis. This category of services for the elderly and others generated a negative 1 percent margin.

Sageworks analyst Libby Bierman said continuing care and assisted living facilities have a number of attributes that likely contribute to margins that are historically weak. Some of these facilities are run by non-profit organizations, and the equipment and fixed costs required to provide the services can be high. In addition, many facilities receive tightly-controlled reimbursement rates from government programs and insurance companies.

Among the other 15 least profitable industries, petroleum merchant wholesalers and a number of categories of retailers have generated margins below 2 percent. Among the retail categories: 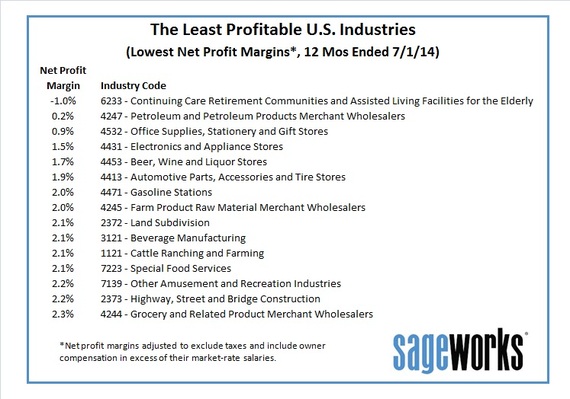 Bierman said that while most business owners would like to make more money off of each dollar of sales, some businesses are set up with more of a focus on sales volume than on profit per sale. As a result, the thinner margins aren't necessarily negative.

"A lot of the businesses you see on our list are retail businesses, and how many of them make money is largely based on volume through their store, so maybe on each Coke they sell they're not making loads of profit, but they're selling enough Cokes to make enough of a profit to make a living," she said.

"A lot of these retailers are focused on getting foot traffic into the stores or selling a lot of units, and these profit margins show why that's important to them."

Another commonality among industries with the thinnest profit margins is that they have substantial inputs on the expense side, especially relative to many of the service-based businesses on Sageworks' list of most profitable industries, Bierman said. Retailers, for example, have costs tied to securing and carrying inventory. "If the retailer has to make sweeping changes in that inventory, it can be difficult to make a lot of money off of the old inventory," she noted.

Other industries, such as continuing care facilities and highway construction firms, require major equipment to operate and may be using a lot of resources to purchase and maintain that equipment, she said. Highway, street and bridge construction firms (NAICS 2373) generated average net profit margins of 2.2 percent over the last 12 months, according to Sageworks' data. That's consistent with trends in recent years.

Differences among industries are one reason it's important to compare the long-term trends of any financial metric for a business to other companies in that industry. It's critical in order to see whether the business is experiencing something unusual, Bierman said. It also helps to look at multiple metrics (such as return on assets, gross margin, etc.) for each industry.

"Some industries are accustomed to working on thin net profit margins," she said.

Through its cooperative data model, Sageworks collects financial statements for private companies from accounting firms, banks and credit unions, and aggregates the data at an approximate rate of 1,000 statements a day. Net profit margin has been adjusted to exclude taxes and include owner compensation in excess of their market-rate salaries. These adjustments are commonly made to private company financials in order to provide a more accurate picture of the companies' operational performance.