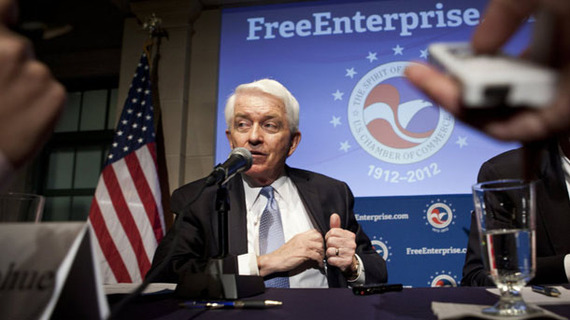 The argument industrial polluters and their friends in Congress are making against the new Environmental Protection Agency plan to curb power plant carbon emissions should sound familiar. After all, it's the same scare tactic they trot out every time the government proposes stricter emission controls: exaggerate the cost, overstate job losses, and completely ignore the benefits.

The debate that roiled Washington 24 years ago during the George H.W. Bush administration is a good example. That's when Congress, after a decade-long stalemate, passed legislation to reduce acid rain, urban smog and toxic chemicals in the air. Industry groups predicted the 1990 Clean Air Act amendments would cost anywhere from $46 billion to $104 billion a year, which, accounting for inflation, amounted to $71 billion to $160 billion in 2006, the base year the EPA used in a 2011 report to calculate the law's cost. The agency determined that, in 2010, the law cost $53 billion -- at least 25 percent less than industry predicted -- and, more important, generated $1.2 trillion in public health and environmental benefits.

The proposal the EPA announced earlier this month would reduce power plant carbon pollution 30 percent from 2005 levels by 2030, which would likely close dozens of dirty, outdated coal-fired power plants. Most of the 600 or so coal-fired power plants operating across the country, which are responsible for 38 percent of the nation's total carbon emissions, were built before 1980, when Pac-Man was cutting edge.

Just days before the EPA announced the draft rule, the U.S. Chamber of Commerce, the country's largest business federation, released a report warning it would cost the economy $50 billion a year for the next 16 years, eliminate more than 200,000 jobs annually, and increase electricity costs by $289 billion by 2030.

There was no mention of the benefits of cutting carbon, but that's no surprise. The Chamber has a history of disputing climate science, and five years ago a number of corporations, including energy companies Exelon and Pacific Gas & Electric, cancelled their memberships over the Chamber's campaign against climate legislation. Although the Chamber refuses to identify its members, at least one major oil company, Chevron Texaco, and the oil and gas industry's main trade group, the American Petroleum Institute, have reportedly given the association substantial donations in recent years.

As expected, the Chamber report provided ammunition for coal state legislators who've been railing about the Obama administration's "war on coal" for some time.

Kentucky Sen. Mitch McConnell (R) waxed hyperbolic. The EPA rule, he said, "is a dagger in the heart of the American middle class, and to representative democracy itself." Echoing the Chamber report, McConnell maintained the rule would lead to "higher costs, fewer jobs, and a less-reliable energy grid."

The response from Sen. Joe Manchin (D) of West Virginia was more measured, but essentially the same. The proposed rule "appears to be more about desirability rather than reliability or feasibility," he said, "with little regard for rising consumer prices, the effects on jobs, and the impact on the reliability of our electric grid."

Another Misleading Industry-Funded Report from IHS

For its part, the Chamber says it is merely providing a public service. "Americans deserve to have an accurate picture of the costs and benefits associated with the administration's plans to reduce carbon dioxide emissions through unprecedented and aggressive EPA regulations," Karen Harbert, president and CEO of the Chamber's Institute for 21st Century Energy, said in a press release.

Accurate picture? If you're looking in a funhouse mirror.

As it turns out, the Chamber report was produced by IHS, the same economic research firm I criticized last fall for its study that grossly inflated the number of jobs created by fracking and ignored oil and gas' impact on public health, the environment and the climate. The Chamber -- along with the American Petroleum Institute, America's Natural Gas Alliance and other industry trade groups -- financed that study.

IHS took the opposite tack this time around to reach its preordained, funder-friendly conclusion. Instead of tweaking its analysis to pump up job numbers, as it did in its fracking study, it used flawed assumptions to magnify the carbon rule's cost and exaggerate job losses. And where IHS left out the substantial cost of fracking in last fall's report, its most recent Chamber report doesn't factor in the carbon rule's considerable benefits, despite Harbert's promise to provide the deserving public with that information.

IHS' latest Chamber-sponsored study came under withering fire from not only the EPA, but also the Tampa Bay Times' PolitiFact.com and Glenn Kessler, the Washington Post's resident fact-checker. Among other things, they pointed out that IHS wrongly assumed the rule would require a 42 percent reduction of carbon emissions from 2005 levels by 2030 when the EPA actually proposed a 30 percent cut.

IHS also incorrectly presumed the rule would require new natural gas plants to install carbon capture technology to meet their emissions-reduction targets. That baseless assumption distorted IHS' estimate of how much electric utilities would have to spend over the next 16 years. It predicted that $339 billion of an estimated $478 billion in compliance costs -- roughly 70 percent -- would be needed to pay for new, more expensive carbon-capture capable plants.

Finally, even if IHS' prediction of a $50-billion decline in annual economic output were true, it would have a negligible impact on a U.S economy with an annual gross domestic product of $17 trillion. As economist Paul Krugman pointed out in his New York Times column, "what the Chamber of Commerce is actually saying is that we can take dramatic steps on climate -- steps that would transform international negotiations, setting the stage for global action -- while reducing our incomes by only one-fifth of 1 percent. That's cheap!"

The Coal Industry Has Been Contracting for Decades

What about the Chamber report's claim that reducing power plant carbon emissions would throw 224,000 people out of work every year? That bloated estimate, which cuts across all job categories, also rests on IHS' flawed calculation of the cost of compliance. In other words, there's not much credibility there.

Coal state legislators, for their part, have mounted a vigorous defense of mining jobs, but they are at least 30 years too late. Although coal production is up substantially, at the end of 2012 the industry employed only 81,000 people, according to the U.S. Bureau of Labor Statistics (BLS) -- less than a third of what it did in the late 1970s. That amounted to only 0.05 percent of overall nonfarm U.S. employment. According to Krugman, "shutting down the whole industry would eliminate fewer jobs than America lost in an average week during the Great Recession of 2007-9."

How does that translate at the state level? Let's look at Sen. McConnell's home state, Kentucky, the nation's third largest coal producer. The Republican minority leader is up for reelection this year, and his Democratic challenger, Alison Lundergan Grimes, is just as adamant about defending coal jobs as he is. When the EPA announced its proposed carbon emissions rule earlier this month, Grimes vowed to "fiercely oppose the president's attack on Kentucky's coal industry because protecting our jobs will by my No. 1 priority."

Both McConnell and Grimes are playing to the home crowd, but the reality is cheap natural gas and mechanization has driven coal industry employment in the state to a historic low. At the end of last year, the industry employed only 11,700 Kentuckians out of a total nonfarm workforce of more than 1.85 million, according to the BLS. That's a paltry 0.6 percent. Meanwhile, in Wyoming -- the country's top coal producer -- the industry employs only 2.2 percent of the state's nonfarm workers. In West Virginia, the second largest coal producer, it employs 2.9 percent.

What About the Benefits?

Given power plants are the largest source of carbon pollution in the country, the new EPA proposal -- the first of its kind -- would go a long way to address the threat that is unfolding before our eyes. In 2012 alone, climate and weather disasters cost the U.S. economy more than $100 billion and, according to a new study, that could be just a taste of things to come. The study, commissioned by former Treasury Secretary Hank Paulson and former New York Mayor Michael Bloomberg, concluded that rising seas and extreme heat could cost hundreds of billions in lost property, crops and labor productivity unless U.S. businesses and policymakers take immediate steps to cut carbon emissions and prepare communities for the unavoidable consequences of climate change.

Not only would the EPA proposal reduce power plant carbon emissions by 30 percent from 2005 levels -- and many would argue that's not enough -- the EPA says it also would cut "traditional" pollutants that cause soot and smog by more than 25 percent in 2030. All told, the agency projects that the new rule would provide an estimated $55 billion to $93 billion in climate and health benefits in 2030.

You won't find any of that in the Chamber report.