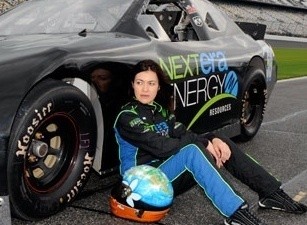 The blare of revving engines, the squeal of tires leaving pit row, it's not an atmosphere where you'd expect someone to be touting the benefits of vegetables, recycling, composting and canvas bags. And that's exactly what makes rising star race car driver Leilani Munter so interesting -- and so important in these times.

A biology graduate turned race car driver, Leilani began racing stock cars 10 years ago, and now competes in both ARCA and IndyCar. Her dual identity, as race car driver and environmentalist, is made perfectly plain on her website -- she sees herself as the bridge between these two worlds. Having been voted "the hottest woman in NASCAR," and being only the fourth woman in history to compete in the Indy Pro Series, Leilani gets a good deal of media coverage. I thought to focus attention on something entirely different: food. Here was an opportunity to get a window in on a world I knew nothing about, thanks to the insights of a totally unique woman. I sharpened my pencil (actually I batteried up my digital recording device)...

Leilani Munter: It's not the first thing that comes to mind when you think of racing, is it? But that's the point -- what I'm hoping to help change. When I first started racing IndyCar, there was a cook who traveled with our team and made food at the track. A teammate let him know, "Hey, our new driver Leilani is a vegetarian." He turned to his assistant later and told her, "Go to the store. Get lots of vegetables. Leilani is a veterinarian." What, she replied. The cook answered: "Yes, she's a veterinarian. You know, one of those people that doesn't eat meat!"

CE: (laughter) Have you been a vegetarian all your life?

LM: Yeah, most of my life. I started because of my love of animals. I grew up around farms, lots of cows, riding my horse. But in my speaking gigs now, I focus on the health benefits, and how we're hurting our environment. I know it's helped my racing and my core health.

I had a big accident a couple of years ago. I hit a wall at 200 miles an hour. The ambulance and paramedics rushed over. A nurse took my vital signs. Then she gave me a strange look, like she was seeing a ghost. She asked if I was a workout-aholic. Not really, I told her. She explained my blood pressure should be through the roof. I'd hit a wall at 200. Yet mine was almost normal.

CE: Race car driving is demanding physically and mentally, requiring an immense amount of energy over many hours. What do you eat before a race?

LM: Carbs are key. I like a hearty pasta with a meat-substitute. Say a Quorn "chicken" breast cut up and sauteed over pasta, lots of veggies from my garden. I eat a lot of high-protein meat-substitutes. MorningStar Farms has great products. It's SO tasty. I serve it to my meat-eating friends -- they can't tell the difference. I have to show them the box to convince them.

CE: You have a garden?

LM: Oh yeah. Different types of tomatoes and peppers. Lots of cucumbers -- too many cucumbers, I have to give them away to my neighbors. I grow a full range of herbs. I love my blueberry bush. I just wish I could have a bigger garden -- but it's hard when you travel so much. I leave the heavy lifting to the worms!

LM: We have a worm composting bin. The problem I have with composting is it's so damn stinky. At a Go Green event recently I met Ed Mullock selling his Worm Factories. I stuck in my head. It smelled like dirt! I was amazed, and bought it right away. Now our worms get all our scraps. I'm not an exceptional gardener, so I attribute all my success to the quality of the soil and the worms!

CE: I bet I could count the number of NASCAR drivers who worm-compost on one finger. So, what do you eat when you're out-of-town at a racetrack?

LM: There's a microwave, fridge and freezer in the hauler that brings our car to the track. I stock up at the grocery store -- fresh produce and meat substitutes -- and my garden beforehand. The rest of the team might have hotdogs in the garage, I'll fire up my Tofurky dogs.

When I'm on the road, whenever I can, I search out vegetarian-friendly restaurant. I use iVegetarian on my iPhone to find them. On my website I've begun to review these restaurants. 5 tofu blocks for excellent, 1 for not-so-good. It's just one more way I can help spread awareness about healthy foods and healthy eating.

CE: Speaking of spreading awareness...there's a phrase on your website which seems to have particular significance. "Small changes multiplied by millions make a big difference." Tell us when did this phrase really make sense -- at a sort of deeper visceral level -- to you?

LM: I think it was in the year 2005. I'd been trying to live sustainably for years. Recycling my cans, using canvas bags, being a vegetarian, that sort of thing. Then one day it hit me: these personal actions aren't enough. I need to tell everyone. If we all could just make small changes. People need to know the impact we're having on our planet -- we have other options.

That's when I really started to reach out to the racing community. There are 75 million NASCAR fans -- that's a huge number of people! Imagine if you could reach them. Daytona has around 200,000 in the stands on race day. The Indy 500 has 400,000 -- the largest single sporting event in the world.

Race car driving isn't the greenest of professions, I know that. But it's my passion. And I've realized it gives me an incredible opportunity to reach an untapped audience. I can have way more impact from the race track than anywhere else!

My sponsors over these last years have been eco-conscious companies, including NextEra Energy Resources, SMART Papers, GreenandSave and groSolar. Now I'm putting together the Leilani Eco Dream Team, where a group of forward thinking companies come together to jointly sponsor my car. Each race my car will carry an environmental message, such as a CFL lightbulb, a vegetarian food producer, a canvas grocery bag, etc.

CE: A sort of call-to-action to that huge audience?

That's why I like Meatless Monday. It's such a simple ask. Just one day a week. We can all do that! Small changes multiplied by millions make a big difference. If Americans reduced their meat consumption by just 10%, that would free up enough land to grow 12 million tons of grain. That's enough to save the lives of the 6 million kids under the age of 5 who die every year from hunger.

And there are so many delicious, protein-rich vegetable meals you can have. At my wedding, I had a completely environmentally-friendly reception. But one family member requested meat. I said sorry, this is my day, any other meal is fine, but not on my wedding. The cater had made these amazing vegetable dishes. Afterwards, this person said it was one of the best meals he'd ever had. He was shocked. It's all about showing people that eating healthfully can be more than just chomping lettuce like a rabbit.

CE: So what does the future hold for sustainable practices at the track?

LM: Well, my first duty is to the race car world. A world I love. I've had NASCAR crew members say to me that I'm short because my growth was stunted by my not eating meat. So there's still work to be done!

I recently gave a speech at the International Stadium Managers Conference. I encouraged these stadium managers to start offering more vegetarian options. Veggie burgers, veggie eggrolls, tofurky dogs -- anything! I think they'd be surprised at the reaction. The number of Americans cutting back on meat is growing, particularly the younger generation, it just makes economic sense.

Fuel-wise...IndyCar uses 100% sugar cane ethanol. NASCAR is currently doing research and testing with bio-fuels. Could be another year or two. But we're hoping. After each race, I donate 1 acre of rainforest to offset my carbon footprint. I want other drivers to follow suit.

And get this...Pocono International Speedway, one of the big NASCAR tracks, just unveiled a 3-megawatt solar farm. I was there when they flipped the switch. Not only does it power the entire racetrack, it puts 2 megawatts into the grid for local homes and businesses.

We're starting to see real steps by NASCAR. I'm hoping one day I'll be able to order a tofurky dog at the track. But for now I'll bring my own -- along with my veterinarian gear!

Editor's note: An earlier version of this post stated that Munter competed in NASCAR. She actually competes in ARCA, a NASCAR developmental league, among others.


More:
compostingvegetarianrecyclingindycartofurky
Newsletter Sign Up
An essential daily guide to achieving the good life
Subscribe to our lifestyle email.
Successfully Subscribed!
Realness delivered to your inbox