There are lots of great things about living in a big city, but there are downsides, too, like garbage mountains, bottomless potholes and a yawning gulf between the rich and poor.

If inequality is the economic battle of our time, then our big cities are the front lines. 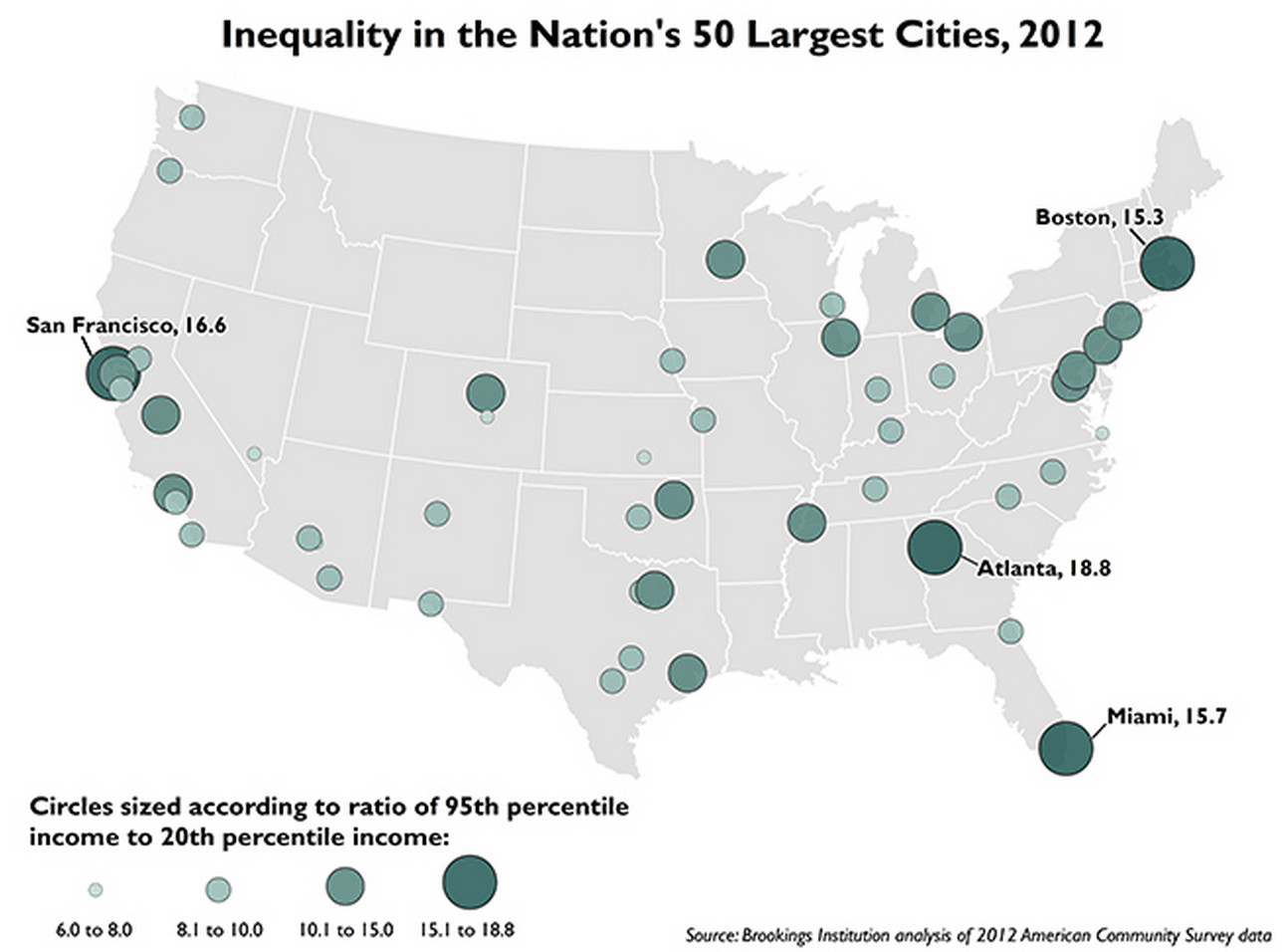 As you can see, Atlanta has the worst inequality of any big city, with an inequality ratio of 18.8, followed by San Francisco, then Miami and Boston.

What does this all mean? The New York Times' Annie Lowrey apparently thinks it means that inequality is just an unfortunate side effect of a super-awesome economy. Her writeup of the study is titled "Study Finds Greater Income Inequality in Nation’s Thriving Cities."

"If you want to live in a more equal community, it might mean living in a more moribund economy," she writes.

The study's author, Alan Berube, compounds this impression in an interview with Lowrey, telling her: “These more equal cities — they’re not home to the sectors driving economic growth, like technology and finance."

Except tech and finance are not really "driving economic growth," are they? Tech is lately bereft of ideas and innovation. Huge deals are making some bankers and app makers fabulously wealthy, but not exactly creating a boom in jobs or growth. The $19 billion spent by Facebook on WhatsApp, based in wealthy Mountain View, California, will go to just 55 very lucky employees. If finance has been "driving economic growth" in recent decades, it has been driving it right into a ditch.

Berube makes no such claim about economic growth in his study. Instead, he points to all the downsides of having so much inequality in our cities:

A city where the rich are very rich, and the poor very poor, is likely to face many difficulties. It may struggle to maintain mixed-income school environments that produce better outcomes for low-income kids. It may have too narrow a tax base from which to sustainably raise the revenues necessary for essential city services. And it may fail to produce housing and neighborhoods accessible to middle-class workers and families, so that those who move up or down the income ladder ultimately have no choice but to move out.

So: not so awesome, then.

Berube also points out that inequality is high for different reasons in different cities. It's high in San Francisco partly because people at the top of the income scale are so ridiculously wealthy, and partly because skyrocketing home prices are driving the very poor from the city.

In Miami, in contrast, inequality is high because the poor households there are really, really poor.

And does anybody think Washington, D.C., fifth on the list of least-equal cities, just ahead of New York, is one of the nation's key economic growth engines?

Cities tend to have higher inequality in part because they have more progressive politics, offering housing, transportation and other support to the poor, Berube notes in his study. I suppose you could reasonably argue, as Lowrey does, that there is more economic activity and opportunity happening in Atlanta (pop. 443,768) than in our least-inequal city, Virginia Beach (pop. 447,021).

But we shouldn't make the mistake of thinking that inequality is an inevitable side-effect of economic vitality, or that reducing inequality will reduce economic growth or opportunity, as Lowrey's story might make you think.

Inequality has soared in the U.S. only in the past few decades, due in part to public policies that let the wealthy keep more of their wealth, without benefiting the poor. In the decades before that, when society was more equal, the U.S. economy somehow managed to turn in one of the greatest economic booms in human history.