Believe it or not, 99 percenters, the 1 percent feels your pain: It suffers from inequality, too. An extremely comfortable inequality. But still, inequality.

Here is a chart that could stoke class rage among the super-rich. It comes from the World Top Incomes Database, using tax data compiled by economists Facundo Alvaredo, Tony Atkinson, Thomas Piketty and Emmanuel Saez. (Story continues after chart.) 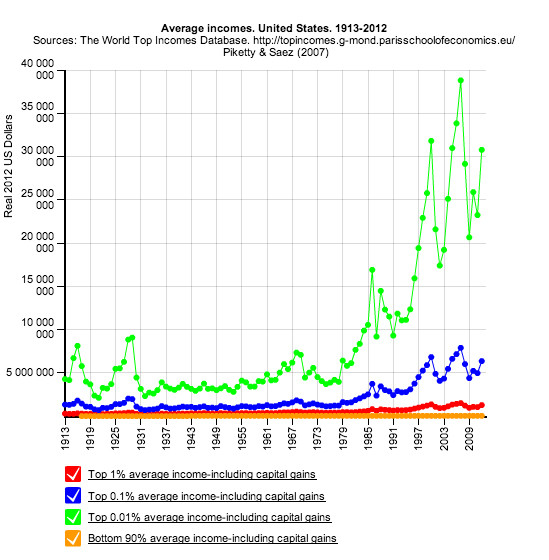 Such stark division at the very top of the income scale is known as "fractal inequality," according to The New York Times, which sounds like something out of physics. Speaking of physics, just as the universe is expanding at an accelerating rate, so is inequality.

There has always been inequality, even among the very wealthy. But it has gotten a lot worse in the past few decades, as you can see from the chart.

The have-mores have left the haves and the have-nots in the dust mainly because of the exploding pay of top corporate executives and Wall Street rentiers, the NYT notes (and we have written before). Most of the super-rich get paid in stocks and other investments, which are taxed at lower rates and have rebounded quickly to new highs since the financial crisis, with the help of the Federal Reserve.

Ronald Reagan helped start the ball rolling by slashing taxes on the rich, and his economists claimed the wealth would trickle down to the rest of us. Something has trickled down on us, all right, but it wasn't wealth: The average income of the bottom 90 percent is actually lower today, adjusted for inflation, than in the late 1970s. The top 0.01 percent makes now roughly 1,000 times as much as the bottom 90 percent, up from about 120 times as much in the late 1970s.

And many of the factors driving this inequality -- over-inflated executive pay, a bloated banking sector, low taxes on the wealthy -- are still mostly in place. The richest will keep getting richer than the rich.