By Michael Cragg and Rand Ghayad

A stealthy trend has developed in the United States over the past several decades. A country that has long revered itself as being a fair meritocracy and the "land of opportunity" began to come apart, so much that the share of wealth owned by the top 0.1 percent became roughly the same as the bottom 90 percent. Today, inequality is one of the main causes of our weak economy; and at the same time, our weak economy is leading to an increase in inequality, both of outcomes and opportunity. Despite earlier reforms aimed at promoting greater efficiency, equity and simplicity in the tax code, the system continues to be crippled by two main concerns: whether taxpayers with similar incomes pay similar tax amounts (horizontal inequity) and whether high income taxpayers pay proportionately more in taxes than those with lower incomes (vertical inequity). Addressing these concerns requires thoughtful tax system changes far beyond simply raising top marginal tax rates on earned income.

The dominant paradigm in the media and Washington is that inequality is purely a matter of divergence in earned (labor) income inequality which can be ameliorated by making earned income taxes more progressive. However, wealth inequality, as it turns out, is much worse. The chart below illustrates the substantial divide in income and wealth between the rich and the poor in the U.S over the last several decades. Disparity is measured by comparing the average amount of income and wealth owned by different socio-economic classes within the country. The vertical axis on the right shows the ratio of the mean income of those in the top 1 percent versus the middle 20 percent of the distribution every year. In 2013 the top 1 percent received over twenty times the income of those in the middle on average -- more than double what it was a quarter century ago. The vertical axis on the left measures the same statistic using net worth (wealth) instead of income. In 2013, the top 1 percent had more than 230 times the wealth of the middle 20 percent -- more than double what is was a quarter century ago. In an earlier article, we described how these shifts represent returns to rent seeking -- in the financial services sector, property and industries where patents and first mover advantages lead to enormous returns. Below we illustrate how the tax system is mirroring these trends in inequality. 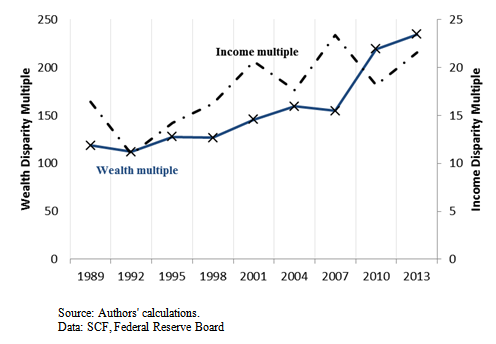 We take a very simple measure of how taxes contribute to inequality: the distribution of tax rates (taxes owed divided by adjusted gross income). We examine the distribution of tax rates both vertically (across income classes) and horizontally (within an income class). We find that a significant portion of the highest income Americans were paying less in taxes as a share of their income than middle-class families. This skew worsened after the Great Recession and calls for addressing both vertical and horizontal inequities in the tax system.

In the figure below, we divide households sampled in the survey of Consumer Finances in 1989 and 2010 into six groups based on their adjusted gross income and tabulate the federal tax rates within each income bracket. The solid bar is the median for each group and across income groups is a typical measure of horizontal inequality, or progressiveness the spread around the median is captured by the other measures and we will focus on the 10th and 90th percentiles.

In 1989, median tax rates were higher for each group and rose at a slower rate. The middle income earners paid 10 percent and rose to 25 percent for the 80th percentile and topped out at 28 percent. In 2010, the middle income median tax rate had fallen to 5 percent and was 20 percent for the 80th percentile and topped out at 33 percent. The system certainly appears more progressive by this measure and this ultimately was the political argument: lower rates for most and make rates more progressive in return for a lower rate on capital income. This had little if any impact on the average rate for the top 1 percent as higher taxes on those with earned income make up for the lower tax rates on those with unearned income.

As the rates between capital and earned income diverged, so did the composition of income. A cynic might say that this was exactly the intended political economy: a significant portion of the wealthiest and hence highest income Americans were paying less in taxes as a share of their income than middle-class families. This is because they are wealthy - more of their income comes in the form of returns to capital holding which was taxed at half the rate of earned income. This pattern worsened over time particularly after the recent recession. 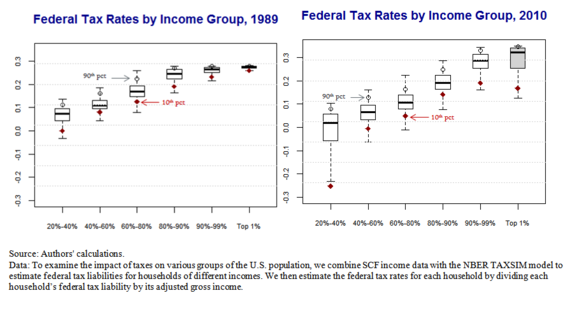 What Can Be Done?

Efforts need to be focused on addressing every aspect of our economic and legal system that distorts productive incentives and contributes to growing inequality. A holistic approach is necessary which at a minimum needs to address returns to rent seeking and tax inequities.

Reduce Rent Seeking: Rents are nothing more than re-distributions from one part of society to another and at best unproductive and at worst distortionary if rent seeking is rewarded more than productive activity. Furthermore, to the extent that skills in rent seeking are correlated with high skill work that is a complement to the productivity of other skill classes, risk seeking is then economically undesirable.

There appears to be consensus that the financial sector has enjoyed both increased opportunities and increased incentives for rent-seeking. The regulatory and legislative changes that emerged both before and even after the financial crisis of 2008 have increased the range of activities in which financial firms could engage. The distortive compensation in financial services whether through carried interest in hedge funds, the retained compensation invested in specialized vehicles and the returns to private equity and investment management can all be addressed through tax policy.

In the property sector, rents accrue merely from scarcity and location. Tax policy has long served to exacerbate these rents through the perpetuation of like-kind exchanges where the government effectively loans money to speculators who can differ taxes on gains from buying and selling property. Modifying these tax subsidies to rent seeking is straightforward.

Historic tax credits, renewable energy tax credits, low income housing tax subsidies and other targeted tax credits may all appear to be socially desirable but to the extent that these credits are purchased and sold through partnerships without changing economic investments, these too encourage rent seeking. Such transactions that lack economic substance are historically common and require the IRS have the resources necessary to audit partnership returns. Inequities have emerged simply because the IRS does not have the resources to properly do its job and make sure the credits are used for their intended purposes.

Another form of rent seeking is the enormous returns that accrue to those who create and extend market power through first mover advantages and patents. The tech run-up at the end of the 20th century and the current tech boom can both illustrate the returns to such rent seeking. Politicians and policy commentators too quickly assume that these tech returns represent productivity gains as opposed to economic rents. In the absence of rents, it is hard to reconcile the compensation of those in the top 1 percent with their potential productivity and the cascade of compensation impacts that follow but even it were, it is even more difficult to see how high marginal tax rates on these rents would negatively impact productive efforts, risk taking and economic efficiency.

Two arguments are typically offered for a low capital gains tax rate. The first is to create incentives for savings based upon a variety of theoretical propositions all of which exclude a critical fact: the propensity to save is correlated with earnings. The second is to avoid double taxation of capital income since dividends and share purchases are exposed to corporate taxes while interest payments are not. But the most direct means of addressing this is to treat dividends and interest payments both as deductions against taxable income. A bi-product of this approach is to remove distortions in corporate capital structure caused by the asymmetric treatment of interest and dividends and will incent corporations to disgorge retained earnings (currently in the $trillions). A direct benefit of raising the capital tax rate on individuals is therefore the lowering of U.S. corporate tax rates which will make U.S. corporations more competitive, and reduce incentives for corporations to export income to lower tax jurisdictions either through transfer pricing or mergers and acquisitions. However, this can only be accomplished with an overhaul of the partnership and corporate tax system because individuals can, and do, stash income in partnerships and corporations to shelter their income from taxes. The distribution of effective corporate tax rates and the proliferation of partnerships is direct evidence of this. Lowering corporate tax rates and raising personal rates on capital income is effective only if the incentive to stash money is addressed. An even more beneficial aspect of this approach is that U.S. corporate tax rates can be lowered which will create incentives to invest in America. At the end of the day, this is what we most need to reduce inequality.

Michael Cragg and Rand Ghayad are employed by The Brattle Group.