In yesterday's edition of the New York Post, New York City was told that the Obama health care plan was going to cause an immediate and utter TAXAPOCALYPSE, and that all of New York City's best and most richest people -- or as the Post called them, "risk takers," a term which has apparently declined in quality since 9/11 -- had better pack up and decamp to Galt's Gulch, immediately. There, they won't need no universal health care because of all the gumption and bootstraps and sticktoittiveness and the homeopathic tree bark recipes collected before all the Native Americans were sent from their homes and genocided.

Anyway, the article was DIRE! And SCARY! And it had big numbers and pictures, with people in unsuspecting sweater vests, smiling in ignorance of the horrific tax burden that was about to be levied upon them. 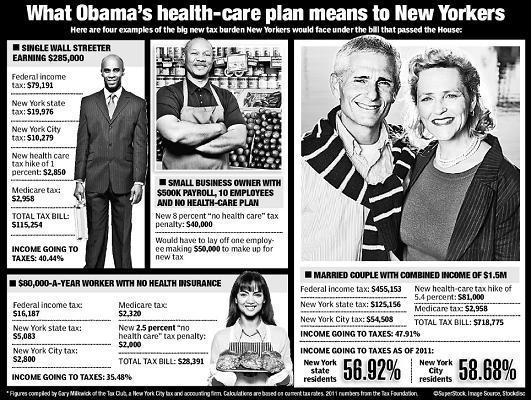 Awesome. This is where one sort of wants to go "inside the numbers." So I sent away a copy of the article to EAT THE PRESS friend, the Anonymous Business Consultant, and here's what he had to say:

The graphic's contention that there is such a thing as a married couple earning $1.5M in New York City, inexplicably without a SINGLE tax writeoff, is ludicrous. You should have a Huffington Post contest where Arianna would give, I don't know, fabulous prizes or something to any such couple that could send a copy of their tax return. I'm quite sure she'd have nothing to worry about.

The fact of the matter is that people with those incomes have HUGE mortgages, charitable and family giving, retirement savings, college savings, etc. Not to mention that NOBODY IN THIS WORLD OTHER THAN PRO ATHLETES DRAWS A SALARY THAT BIG. If you are making $1.5 mill, you're doing it with investment income, which is taxed as capital gains and can be subject to any number of tax-dodging strategies.
I mean, I'm serious: The wage income (salaries) of Fortune 500 CEOs are in the $500-700K range, I think, and to my knowledge no two such CEOs are married to one another.

"There literally, at this point, is very strong reason to relocate your family and your business outside New York."

As far as I can tell, nothing about the RELATIVE tax situation is changing under the bill... so what does this mean? There "literally" is a reason to relocate right this minute, before any reform!

Another classic paragraph is:

"Many small businesses file their business taxes under personal income," he said. "That's the way the tax law is written. Small business, which is really where most of the job creation takes place, could be hit hard."

As far as I understand, there is a very low limit to how many employees you can have and still file your business tax under personal income (like, I think maybe ONE employee)... so how is that where the job creation takes place?

Finally, there's just the raw awesomeness of the article never considering the most salient fact: Sure, that $80,000-a-year worker with no health insurance will have to pay a $2,000 "no health care" tax penalty. But you know, they'll also HAVE HEALTH CARE. So there's that.
Advertisement

If you're making $80,000 a year, and the feds are getting 16 grand, YOU ARE DOING YOUR TAXES WRONG. Your home office is NOT BIG ENOUGH, for starters.

But what if you are a white person who likes to wear sweaters around his neck?

Okay so, if you are making $1.5 million a year, as their "rich people graph" shows, and you are paying half a million in federal taxes alone, then it is time for you to start a foundation to churn out some of that cash and also to fire your tax attorney. NO ONE who makes $1.5m pays out half a mil to the feds. This is what we call "lies."

The Post, who hates rich people except for in times like these, went crazy. So did the Drudge Report, which linked to the story with the headline: TERRIFYING 57% TAX LOOMS FOR BIGGEST EARNERS IN NYC.

How terrifying is it really? The story makes it sound like Obama Hood is coming to take away more than half of everyone's current income, which is not actually the case. The plan is not even to raise the tax rates of those New Yorkers making over $250,000 by 60 percent. It's to raise it by 5.4 percent.

Here in New York, the top tax rate, including city taxes, local taxes, and medicare, is already 53.17 percent. It already sucks that bad. And lest we forget, with the plan, we'd get health care, which, last we could bear to look at our pay stub, already siphons away a healthy percentage of everyone's income.

Finally, thanks to Brian Beutler at TPM, we can look at the Post's numbers, once they are adjusted for reality: 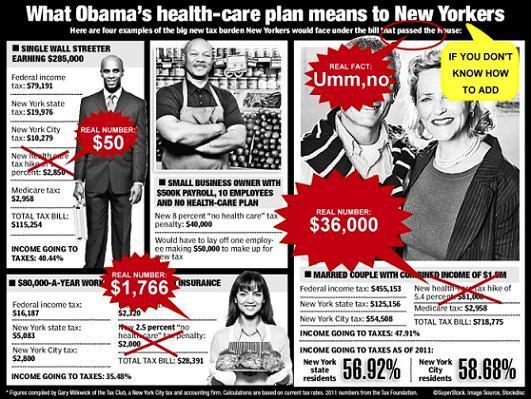 Well, look, New York Post, that was sure a fun period of our lives. And here's hoping you induce many of New York City's "risk-takers" to ride out of town to whatever Objectivist paradise to which you've got GoogleMap directions. I'm sure the loss of tax and subscriber base will do you guys no end of good.

Good luck with that "avian flu," too!