The following article is based on excerpts from the recently released book The Measure of a Nation: How to Regain America's Competitive Edge and Boost Our Global StandingA key goal in Measure of a Nation is to compare the United States to other wealthy countries, with the idea being to identify which countries are performing the best in each area of interest: health, safety, democracy, education and equality. In each of those areas, the countries that are performing the best are examined to determine which best practices might be applied here in America. In order to do this analysis, we selected the subset of countries that are both wealthy (nominal GDP per capita over $20,000) and have a population greater than 10 million (upper third of national populations, no city-state countries) as a comparison group. This comparison group consists of 14 countries: Australia, Belgium, Canada, France, Germany, Greece, Italy, Japan, Portugal, The Netherlands, South Korea, Spain, the United Kingdom, and the United States.

Infant mortality rate is defined as the number of deaths of infants one year or younger per 1,000 live births. It is a critical measure because the death of a young child has a greater impact on a population's life expectancy than does a death from disease or injury in the middle or later stages of life. In the developing world, infant mortality tends to be a result of pneumonia, diarrhea, tetanus, and congenital malformation. In the developed world, it is typically associated with low birth-weight or extremely premature births. 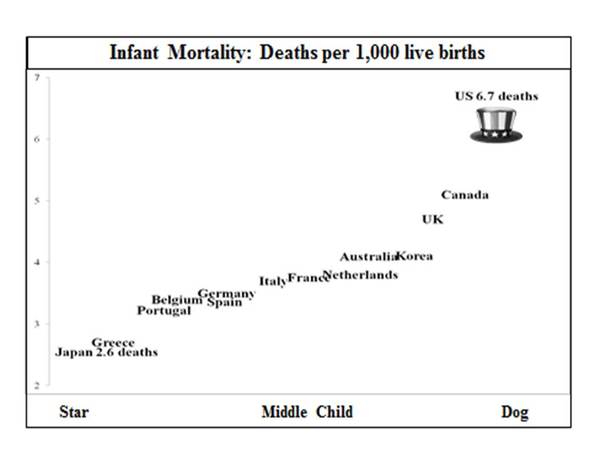 The fact that the United States has the highest infant mortality is not because of a lack of specialists or facilities for neonatal births; on the contrary, America has more neonatologists and neonatal intensive care beds per person than Australia, Canada, or the United Kingdom.

As with other health metrics, America's relative performance is declining. In 1960, the United States had the twelfth lowest infant mortality rate in the world. By 1990, we had dropped to twenty-third, and we sank to thirty-fourth in 2008. Our high infant mortality rate evidences the economic, ethnic, and racial disparities referred to earlier. For example, in 2005, African-American infants suffered a death rate of 13.63 per 1,000 births, more than twice the national average. The CDC's 2004 world rankings indicate that an African-American baby would have a better chance of survival if born in Russia or Bulgaria than in the United States. Low birth-weight incidence explains some of the racial inequality. Low-weight births, defined as newborns weighing less than 2,500 grams or approximately five pounds, are about twice as common among African Americans as among (non-Hispanic) Caucasian and Hispanic babies, occurring at a rate of 13 percent among the former and at a rate of only 6.5 percent among the latter. Among the factors contributing to these lopsided outcomes are disparities in prenatal care, nutritional supplementation for pregnant women, and inadequate social welfare. Yet even if we eliminate this racial disparity and compare only the infant mortality rate of Caucasian Americans, our ranking versus the competitor countries is unaffected.

Infant mortality is just one of many metrics where the US used to be a world leader and has slipped in the last few decades. Other countries have identified leading practices that United States can learn from and adopt to improve its health care system. The idea of applying competitive intelligence and identification of best practices to countries is explored in detail in Measure of a Nation, where the publicly available data is displayed, links are provided and suggestions for improving America based on this competitive intelligence are discussed.