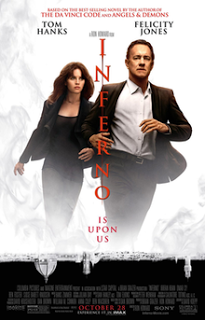 Ron Howard's Inferno mixes Philippa Foot's famed Trolley Problem with the eponymous Dante poem. For the billionaire geneticist Bertrand Zobrist (Ben Foster), it's either the tortures of Dante's infamous eighth circle Malbolge, or the prospect of a sixth extinction that will destroy the human race. "Dante's hell isn't fiction anymore. It's a prophecy" is the idea that the film espouses. It's doubtful Dante would have been amused. Tom Hanks plays Robert Langdon a Dante scholar who finds himself the captive of a hallucinogenic nightmare which is one way to describe the film's convoluted plot (based on a Dan Brown novel). It's actually Botticelli's "Map of Hell" (itself based on The Inferno) that provides the film's guiding image. But let's get back to the deal. Would you sacrifice half of mankind and condemn them to great suffering to spare future generations? In the film The World Health Organization is out to do anything they can to stop Zobrist's Inferno virus, under the theory that the evil Zobrist is also mad and that there's no Sixth Extinction awaiting mankind. But the paradigm the film presents is not so far flung. What if mankind really had to make a sacrifice which entailed some degree of suffering to insure the perpetuation of the race? What if scientists made it clear that if there wasn't a cessation in the use of fossil fuels, the earth would become overheated, the seas would overflow and human life would come to an end? What would the choice be? Continuing life as it is, or doing something drastic? By the way, don't bother to see the film. It won't help you to answer these questions.