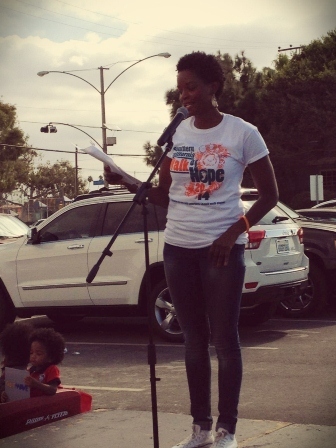 Last week, I had the pleasure of speaking with Tomiko Fraser Hines, the first African American face of Maybelline, self-proclaimed "infertility overcomer," and RESOLVE ambassador. Seven years ago, Hines was diagnosed with infertility due to premature ovarian failure, an autoimmune disorder. She and her husband began an emotionally draining infertility journey and spent thousands of dollars, pulling from their retirement savings, on a number of different infertility treatments. After six years of trying to conceive, Hines and her husband chose to use an anonymous egg donor, and Hines gave birth to twin boys.

I reached out to Tomiko about her experience with first deciding to share her infertility story, and specifically asked how the disease impacts the African American community.

Barbara: You decided to go public about your infertility -- why did you decide to tell your story? Who did you tell?

Tomiko: We didn't decide, we chose to share our story -- which I feel is a more powerful stance than simply deciding to go public. In the beginning of our infertility struggle, my husband and I felt very alone and couldn't get any answers about the disease. African Americans were not talking about it online, including celebrities. After becoming pregnant through an anonymous egg donor, my girlfriend suggested that I might consider sharing our story to inspire and encourage others, as well as put an African American face to the disease and erase the shame and guilt associated with infertility.

Tomiko: I remember the post very clearly. I posted our story on Facebook when I was about six months pregnant. I titled the post "Unstoppable," because my husband and I had to remind ourselves that we were in fact, unstoppable. After the post went live and I received such a positive response, I wrote an article for Mommy Noire, an African American women's blog about all things mommyhood. I was also interviewed by Essence magazine and Katie Couric.

Barbara: Do you think that the African American community shares their infertility stories differently than others?

Tomiko: It's my belief that there is still a taboo of shame and guilt surrounding infertility in the African American community. There is a stigma that we shouldn't air our dirty laundry, and we have to be strong. Conversations around infertility are tentative or may not happen at all. But all communities can relate to the same feelings and struggles with this disease.

Barbara: What kind of response did you receive when you shared your story?

Tomiko: The response was overwhelmingly, 100 percent positive. There were no negative comments, whether in person or online. I received comments, especially from women of color, who seemed to be breathing a sigh of relief after seeing the videos and articles I posted online, because someone was talking about the issue from an empowered standpoint. I've formed amazing connections with individuals experiencing infertility, and I continue to stay updated with them throughout their journeys. An amazing micro-community formed because my husband and I chose to share story.

Barbara: Why did you decide to partner with RESOLVE?

Tomiko: RESOLVE has been a part of my journey even before I reached out to ask to partner with the organization. RESOLVE solidified the empowered choice my husband and I made to go forward with an anonymous egg donor. I reached out to RESOLVE, and we decided to work together so that I could share my story and specifically raise infertility awareness for the African American community.

Barbara: You were the emcee at the 2014 California Walk of Hope event, our signature fundraising event that supports those with infertility. Can you tell us about your experience?

If you want to learn more about Tomiko's story, you can participate in a Twitter Chat with her on Thursday, April 23rd at 3 PM EST. Follow @resolve org and @GoddessTomiko.

For more information about RESOLVE and the National Infertility Awareness Week, visit www.resolve.org/niaw.

More:
InfertilityParentsinfertility-treatmentsFamilyinfertility issues
Newsletter Sign Up
Raise the kind of person you'd like to know
Subscribe to our parenting newsletter.
Successfully Subscribed!
Realness delivered to your inbox