True to its name, the Wild Card playoff game between the Atlanta Braves and the St. Louis Cardinals got wild in the bottom of the eighth inning when the umpires invoked the infield fly rule on a fly ball to left field off the bat of Andrelton Simmons that had seemingly dropped for a hit (or an error).

With the Braves trailing, 6-3, and runners on first and second, Simmons came to the plate with one away. The shortstop popped up a 3-2 pitch from Cardinals reliever Mitchell Boggs to left field. Cardinals shortstop Pete Kozma ranged out into left, arms spread wide, trying to get under the ball. Meanwhile, Matt Holliday charged in toward the ball. With both players in the area, the pop fly dropped between them.

What initially looked to be a tremendous break for the Braves, who appeared to have loaded the bases with just one out in the eighth, turned into the first controversy of the 2012 MLB playoffs. The umpire in left field had raised a single finger as the ball dropped, signaling that the infield fly rule was in effect. This ruling meant that Simmons was automatically out.

"You cannot call that an infield fly. It's too deep. He wasn't camped," TBS analyst Ron Darling said immediately after learning the call.

Showing their displeasure with the call, fans at Turner Field rained debris on the playing surface, causing a stoppage in the game.

Here is the entry for "Infield Fly" in the officials rules available at MLB.com. Did the umps get it right? Did it look like that ball was about to be "caught by an infielder with ordinary effort" when the umpire signaled? Braves fans didn't seem to think so. Neither did the TBS crew.

An INFIELD FLY is a fair fly ball (not including a line drive nor an attempted bunt) which can be caught by an infielder with ordinary effort, when first and second, or first, second and third bases are occupied, before two are out. The pitcher, catcher and any outfielder who stations himself in the infield on the play shall be considered infielders for the purpose of this rule. When it seems apparent that a batted ball will be an Infield Fly, the umpire shall immediately declare Infield Fly for the benefit of the runners. If the ball is near the baselines, the umpire shall declare Infield Fly, if Fair. The ball is alive and runners may advance at the risk of the ball being caught, or retouch and advance after the ball is touched, the same as on any fly ball. If the hit becomes a foul ball, it is treated the same as any foul. If a declared Infield Fly is allowed to fall untouched to the ground, and bounces foul before passing first or third base, it is a foul ball. If a declared Infield Fly falls untouched to the ground outside the baseline, and bounces fair before passing first or third base, it is an Infield Fly.

With that Braves' rally slowed, the Cardinals eventually escaped the bottom of the eighth unscathed after play resumed. They held on for the win at 6-3 and will keep their repeat bid alive.

Cardinals sprinted off the field as more cups littered the field...Fans now chanting for Chipper..An ugly end to a beautiful career

ATLANTA (AP) — The Atlanta Braves played their NL wild-card playoff game at Turner Field under protest after fans littered the field with trash over a disputed infield fly call that led to a 19-minute delay.

Trailing 6-3 in the eighth inning Friday, the Braves appeared to catch a break when a fly ball to short left field dropped between St. Louis shortstop Pete Kozma and left fielder Matt Holliday after a mix-up over who had it.

But just before the ball dropped, left field umpire Sam Holbrook signaled an automatic out because of the infield fly rule, designed to prevent a team from intentionally dropping a popup in order to get extra outs with more than one runner on base.

Instead of Atlanta having the bases loaded with one out, Andrelton Simmons was called out. The fans immediately started hurling cups and trash, covering the field. 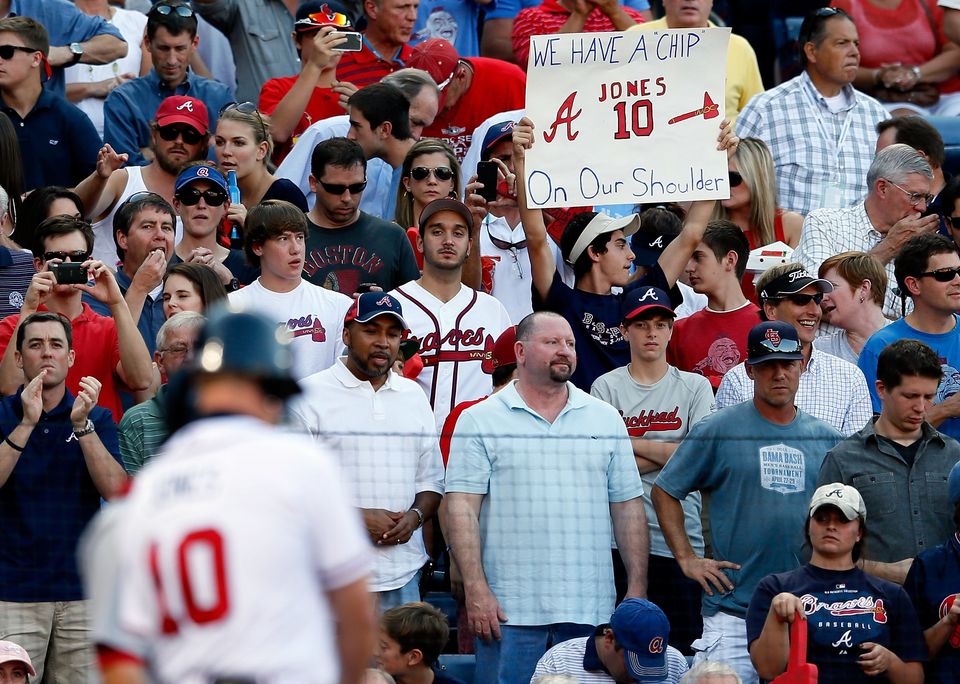