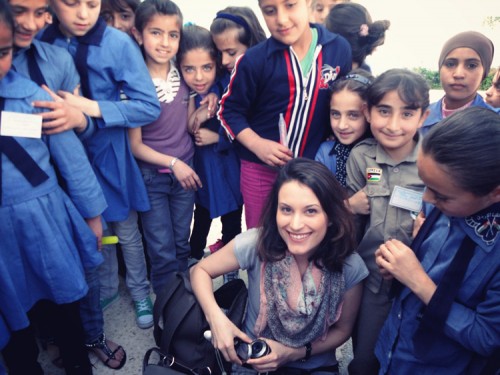 Growing up in Como, Italy, which movies served as the basis for your early film education? Would it be clichéd to assume it was all Fellini, Bertolucci and Spaghetti Westerns?

During my teenage years my favorite filmmakers were Alfred Hitchcock and Stanley Kubrick. I was mesmerized by their visual bravura. My love for Fellini, Antonioni, De Sica, Visconti, and Olmi came later -- well into my twenties. It's not a matter of changing tastes, but rather of accessibility.

Italy is a wonderful country, with a rich cultural heritage and a long list of illustrious artists. The problem is, cinematic masterpieces are rarely shown on television and in cinemas. Italian TV is a cultural wasteland. And even DVDs of classics like 8 1/2, L'Avventura and Umberto D. are very hard to find. During my studies in the United States, I was able to watch dozens of films by Fellini, Antonioni, De Sica, and Olmi thanks to a wonderful service called... Netflix!

Who are your favorite directors currently?
There are so many directors to mention! The common thread for my favorite directors is the fact they are all true auteurs, with a deep involvement in every aspect of production. Their intense connection to the subject shines through their films.

The number one would be Stanley Kubrick: because of his genius as a film director and technician, his intensity, inventiveness, incredible ambition and his total mastery of various genres of filmmaking.

Ingmar Bergman for productivity and consistency throughout six decades of work. Sofia Coppola for the way she portrays the inner life of her female characters and for her poetic, lyrical style -- she's a master of subtext.

Documentary-wise, I adore the work of Alina Marazzi: for her visual flair, originality and the intimate quality of her films.

In addition to writing, shooting and directing, you spend a lot of time editing film. Do you listen to music while you do so? If so, what has been in rotation lately?

I listen to classical music in the early stages of editing. Philip Glass, Yo-Yo Ma, Gioachino Rossini, Dvorak and Aram Ilyich Khachaturian are some of my current favorites.

Your current film project, The Illusionists, is a feature-length documentary about the body as the "finest consumer object". How do you explain to people that this subject is about more than just crying foul against airbrushing, digital enhancement and the like? What is at stake?

I'm often asked about my reasons for making The Illusionists -- given the breadth of information already available on misleading advertising practices and the use of airbrushing. The Illusionists is not a film about beauty. Or women's bodies. That's just the tip of the iceberg. What intrigues me is the link between commerce, media consolidation, marketing practices, and ever-changing social expectations. The body has become the finest consumer object because there's endless consumerism built around the pursuit of an ideal that is by definition impossible to attain.

The Illusionists is essentially the brainchild of Jean Baudrillard and Susie Orbach, with a mature, in-depth look at globalization, consumer culture and their psychological effects on people the world over. Previous documentaries on these topics have focused on the present or recent past and have held a Western-centric view. The Illusionists is much broader in scope: it will follow the evolution of marketing messages throughout the 20th century and will have interviews with experts on three different continents.

In the video overview of The Illusionists, the narrator mentions that one of the reasons for making the film is a concern about "our culture's obsession with image and physical appearance over substance and intellect." Ultimately, your message seems to be one of self-confidence, agency, and purpose, all themes that also figure largely in your online interview project, No Country for Young Women. Who inspires you? Who's getting stuff done?

The most valuable lesson I have learned so far has been the importance of professional networks. Self-confidence, talent, and determination are important, but no man -- or woman -- is an island and these qualities can only take you so far. Joining forces is crucial.

A year ago I became a member of the exclusive global women's network 85 Broads and a few months later I joined DIRE -- Donne Italiane Rete Estera -- a network of Italian women working abroad. My life and career experienced a sea change: women from these two networks introduced me to other professional women, thus opening doors that led to wonderful opportunities. I couldn't be more grateful for this. So to answer your question, who inspires me? Women who help other women.

After being on the receiving end of incredible encouragement, generosity and goodwill, I have a new goal: to eventually become an angel investor. The Pipeline Fund, created by my friend Natalia Oberti Noguera, is training women philanthropists to become angel investors. I couldn't think of a worthier social venture.

As a vegetarian living in Paris, a city renowned for its decidedly non-vegetarian cuisine (foie gras, escargot, lardons -- oh, my!), what tips can you offer those traveling to the city with similarly restricted diets?

My no. 1 tip would be stay away from French "vegetarian" restaurants: they have a tendency to overdo sauces and concoct dishes with heavy creams and upwards of twenty ingredients. I have yet to find a vegetarian restaurant in Paris that does justice to tofu.

Ethnic restaurants are an excellent alternative -- especially Italian, Indian, and Lebanese -- as they offer plenty of vegetable dishes.

Under ideal circumstances, you should try to rent an apartment with a kitchen (instead of booking a hotel room). You could cook your own food and save lots of money; eating at restaurants in Paris is extremely expensive.

Outside your home, in which places are you likely to be found?

Sipping bubble tea in the 13eme arrondissement, at the library (or rather, libraries -- I enjoy visiting Paris' public libraries and foreign cultural centers), riding around the city on the Velib, or taking pictures at dusk in the Latin Quarter.

What has been your most treasured discovery while traveling?

My personal policy while traveling is to stay light. I'm not a big shopper and my most treasured travel "items" are the photographs I take -- because they turn fleeting memories into something permanent. Every December I select my favorite photos from the year and create glossy photo albums. I love revisiting them.

So far, my most treasured photo of 2011 is that of a shoeshiner in Amman, Jordan: a man in his early 70s, with piercing green eyes, great posture and immense charisma. Every time I look at his face, I can't help but think of Marlon Brando. The person who accompanied our film crew paid the shoeshiner and asked him if I could take a photo of him. I only had 10 seconds to guess the metering (I use vintage manual lenses) and to take the photo. I couldn't be happier about the outcome and I feel a tug at the heart whenever I see it.

Friday, August 5th marks the deadline of your Kickstarter campaign to raise a minimum of $33,000 to fund production of The Illusionists. As funds continue to stream in beyond that critical benchmark, ensuring a breadth and depth of archival footage, what songs will you be dancing to in celebration of this tremendous accomplishment when the clock strikes 5:55PM EDT?

Whenever I need inspiration for a new project, I always listen to classical film scores: famous songs from films of Fellini, Kubrick, Wong Kar-Wai, Sofia Coppola, and Wes Anderson. Tonight, in the final minutes of my Kickstarter campaign, I'll definitely put on "L'Illusionista" (The Illusionist), a composition by Nino Rota for Fellini's 8 1/2. 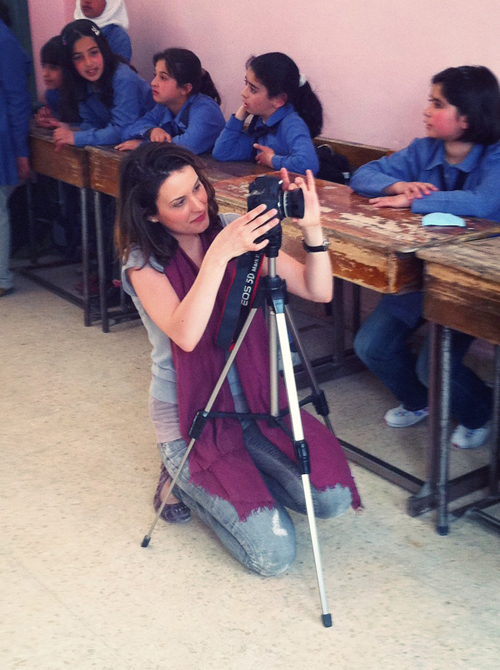 Elena on location in Jordan. Photo courtesy of Elena Rossini

Elena Rossini is a film director, cinematographer, and editor originally from Como, Italy. She has studied in the United States and has been working in Europe for the past five years. In addition to The Illusionists, recent projects include the short film Ideal Women commissioned by the Louvre Museum and ARTE Web, cinematography for Three Days To See (a documentary about Helen Keller) and Lili's Journey (a documentary about women's social and economic empowerment). Elena is also the creator and editor-in-chief of No Country For Young Women (www.nocountryforyoungwomen.com), a multimedia platform whose aim is to promote positive role models for women. www.elenarossini.com