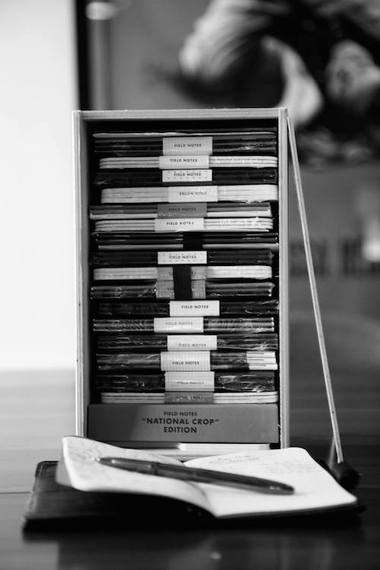 There's lots of meetings. And conference calls -- it's an incredibly collaborative place so everyone's always bouncing ideas off each other. Periodically I get to lock myself in an editing room for hours and give notes on videos. I just started producing a feature documentary so at the moment I'm looking over a lot of cash-flow schedules.

How would you describe your role in the company?

I help oversee our film and TV business. That includes everything from creative development, making deals, producing, overseeing edits and working on marketing. Sometimes I do other stuff. Sometimes things get interesting...

I see you collect Moleskines... What kind of notes do you keep in there?

It's not just Moleskines -- it's whatever notebooks I can get my grubby paws on. I write everything down, but I seem to have a special penchant for lists and charts which I save and shove in a box and have absolutely no practical use for later. It's a sort of embalmed archive of my brain that exists (to paraphrase the Kinks) to prove I've really existed. Here is a list I wrote down of things that begin with the letter 'F':

FILMS I'D CATEGORIZE AS BODY HORROR

As a creative, which objects bring you the most inspiration and why?

Blank pages and pens -- that's where I get my best work done. And books -- they're full of other people's good ideas. I like old-timey stuff like telescopes and ragtime cartoon characters that sing and dance and play the ukulele. Mickey Mouse has been a recurring motif in my life. He was originally a bastion of metaphysical chaos. For all intents-and-purposes he ceased to exist after 1940 when they gave him pupils and cut off his tail. As Kenneth Anger eloquently put it: "they castrated the poor fellow." Some other old stuff I like: Marcel Proust, Walker Evans, Hoagy Carmichael, oscillators, Bringing up Baby, Robert Frank, Robert Crumb, hand-drawn maps, Lenny Bruce, Campari, The Night of the Hunter, Wally Berman, steak-au-poivre, Krazy Kat, Anna Karenina, Exile on Main St.-era Rolling Stones, the former Yugoslavia, George Plimpton, Georges Perec, the twist, The Marx Bros., Paris in the 20's, New York in the 70's (the late 70's), Prince.

Who are your favorite theorists and what is it about them that you admire?

Roland Barthes, Ludwig Wittgenstein, Richard Feynman, Susan Sontag, Brian Eno, W.G. Sebald, Geoff Dyer, Tom McCarthy. I like them for their elasticity of thought. I used to be really into Heidegger but he turned out to be an asshole.

Do you think semiotics is relevant in this day and age?

Yes -- the more we immerse ourselves in a virtual representation of reality, the more important signifiers become.

Vice is such a rapidly expanding media outlet, what do you foresee the company doing next?