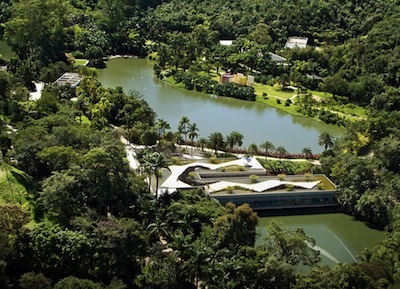 I'm currently in Brazil leading an art tour for collectors and dealers from the United States. We began our tour in the city of Belo Horizonte, the capital city of Minas Gerais, a state famous for agriculture and cuisine as well as its mineral resources and mining. Belo Horizonte is the birthplace of Brazilian Modernist architecture, as the city's leaders were among the first to commission the then 33-year-old Oscar Niemeyer to create a magnificent grouping of structures -- a casino (later to become a museum), a dance hall, a yacht club and a chapel -- all ringing the reservoir of Pampulha. The casino/museum is particularly fine in its detailing with a interior beautifully clad with lapis green and yellow onyx and an intimate auditorium with bandstand dancehall.

That dancehall is the featured locale of an artwork by Valeska Soares called Folly, which was the first pavilion we visited the next day at Inhotim, the legendary arts center two hours north east of Belo Horizonte. The creation of Brazilian mining baron Bernardo Paz, Inhotim is an art park that sprawls over a manicured, jungle landscape that's more than four times the size of New York's Central Park and features dozens of pavilions and outdoor sculptures dedicated to Paz's vast contemporary art collection. 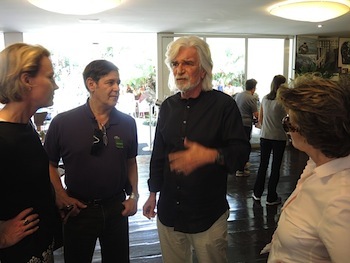 After a two-hour road trip, we arrived at Inhotim at 10 a.m. we climbed into a golf cart and speed off in a mad quest to try to see all two dozen pavilions in one-day. Our first stop was Valeska Soares' Folly where we encountered the mysterious interpretation of Niemeyer's Pampulha dance hall in which ghostly figures are seen waltzing alone. And then were on to our next stop, an outdoor telescope-like installation of Olafur Eliasson.

At about 1 p.m. we stopped for lunch at one of Ihotim's two buffet restaurants. While there I spied Bernardo Paz himself, and introduced him to our group. In a particularly ebullient mood, he told us about the creation of the art center -- with a broad smile and a sweeping gesture he said "See all this? It's mine!" -- and then chatted about the complexity of keeping a staff of 1,400 people in line, and of his up-coming plans that include a luxury spa hotel to open next year and dedicated art pavilions soon to come by artists such as Olafur Eliasson and USA painter Carroll Dunham.

The manicured grounds of Inhotim will continue to expand -- they now include more than 1,200 varieties of palms alone! -- as will the art collection. It was a glorious day for art junkies and nature lovers alike.

The art pavilions in Inhotim we visited were:

1. Valeska Soares: Folly (2005-2009); video installation installed in a ten-sided bandstand, much like the stands one finds in the center of every Brazilian town

14. Miguel Rio Branco: a pavilion of photo installations and projections touching on themes of poverty, homelessness, and human perseverance 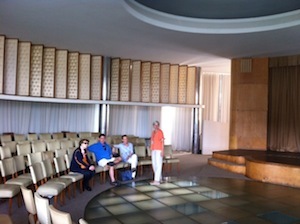