Suffering from lung cancer? Here's a Tylenol and some warm compresses. Are your intestines escaping? Not to worry; here's some K-Y Jelly to shove them back in.

Between 2008 and 2013, Corizon Health -- the country's largest prison health care provider -- was sued 660 times for malpractice. But Governor Rick Scott's administration failed to take note of this history when it awarded Corizon a $1.2 billion contract in 2011. 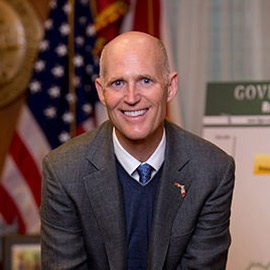 Now an investigation by The Palm Beach Post reveals that Florida inmates have been dying in droves since the state privatized prison health care.

In January 2014, three months after the privatization was fully implemented, the number of inmates who died "shot to a 10-year high," says the Post. In the past 10 years, there were only 10 months in which 30 or more inmates died. So far this year, the death count has "topped 30 a total of four times in just seven months." This is a dramatic increase from 12.5 percent to 57 percent. The investigation also found that the number of referrals for outside hospital care is down by 47 percent compared to 2012.

How did this happen? In his 2010 gubernatorial campaign, candidate Scott promised to cut prison funding by $1 billion. "Privatization isn't necessary for us to achieve that goal, but nothing is off the table," Scott's spokesperson Brian Burgess said. True enough, the Florida Corrections Department soon sent out a request for proposal for prison health care services. Underbidding the competitors, Corizon argued that it could provide the current quality of care, but for seven percent less.

As the privatization process moved forward, 1,890 state employees received a dismissal letter reading, in part, "Due to the outsourcing of this function, your position will be deleted." As far as Corizon was concerned, there were some snags along the way. But $415,000 spent on lobbying the state legislature between 2011 and 2013 might have gone some way toward ironing them out.

In December 2012, the contract was blocked by a judge after three unions -- AFSCME, the Federation of Physicians and Dentists, and the Alliance of Healthcare and Professional Employees -- filed a lawsuit. In its ruling, the court writes that the Corrections Department broke the law when it approved the transfer of $57.6 million -- money earmarked for salaries to state employees -- to Corizon.

Six months later, the contract was revived when an appellate court over turned the decision noting: "The LBC [Legislative Budget Commission] simply moved funds from different line items within the Department of Health Service's Program."

In the midst of the court challenges last year, Governor Scott struck a no-nonsense pose: "If we can provide a great service at a better price, the we ought to do that." But as David Fathi, director of the ACLU National Prison Project, warned in The Huffington Post when the contracts were awarded, sometimes privatization can be lethal:

"Unlike governments, private companies exist first and foremost to generate profits [...] If they say they can do it more cheaply than government, it's because they're cutting something. When you combine the profit motive with limited oversight and a uniquely powerless population, you get bad and sometimes lethal results," Fathi said.

Unfortunately for many vulnerable prisoners, the Scott administration failed to take heed.

Excerpted from CMD's new report Pay to Prey: Governors Facilitate the Predatory Outsourcing of America's Public Services and follow the conversation at #OutsourcingAmerica.