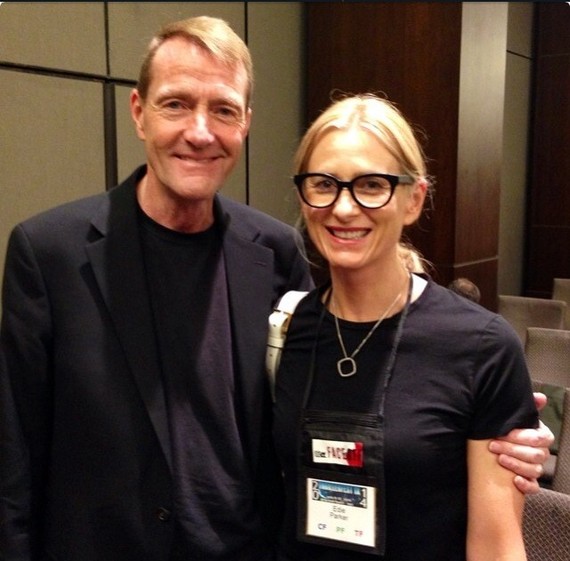 The International Thriller Writers motto is "Innovate Never Imitate," and part of the organization's mission statement "is to provide a way for successful, bestselling authors to help debut and midlist authors advance their careers." They did so last week at Thrillerfest, which was attended by writers of all levels (including superstars) as well as their fans.

On Friday night I went to Fanfest, ITW's cocktail party where fans get to meet and spend time with their favorite authors. I walked into the room and the first person I saw was Scott Turow, drinking a beer as he chatted with two literary types. R.L. Stine was signing books and posing for photographs as I walked over to a table where Lisa Gardner patiently autographed her novels and chatted with a doctor about his first book, a thriller.

"I'm here with my mother," said Gardner. "She's working the room for me. How many authors can say that?"

Best selling author Lee Child is Co-President of the ITW and was also at a desk signing books for a large group of fans. I had an opportunity to speak with Child earlier in the day and we discussed his extremely successful Jack Reacher series. Reacher is a former Army MP who wanders around the country with little more than the clothes he's wearing, along with a great deal of nobility and altruism. Reacher's travels take him to places like Texas, Missouri and rural Nebraska, where he meets every possible physical challenge (kicking plenty of asses) and employs powers of deduction that would embarrass Sherlock Holmes.

In the late 1990's my father -- a WWII veteran and military buff -- introduced me to Child's writing. "Read this guy," he said. "He's fantastic. Definitely former military, certainly from somewhere in the heartland." Dad had one out of three correct. Lee Child is a great writer, although he's British and never served in the military. However, Child's father served in WWII, he's married to an American and prior to moving to the US, he visited the country more than 100 times. Child attended his first baseball game at Yankee Stadium in 1976, and it also happened to be on old-timers day, hence Child's affection for choosing obscure old Yankees as Reacher's aliases when deceiving an enemy.

Fans are always curious about who authors use as models for their protagonists, and while Child may not be 6' 5" 250 lbs., with the ability to easily crush a spleen, he definitely possesses Reacher's unique observational abilities. I asked Child if he takes notes or does research and he said, "I'm an aficionado about everything. I like to know how things work. I see situations and I absorb and remember them."

Child considers the east and west coasts as "very European," and is more interested in the vast emptiness found in parts of the U.S., like West Texas. He told me a story about a woman he met there who said that if she couldn't grow or kill something, she had to drive five hours to buy it. "As an Army brat, Jack Reacher grew up in a transient, different universe, subjected to military conduct," said Child. As a result, Reacher still can't settle down and connect, so he travels primarily by bus, which offers endless plot possibilities as he drifts from one part of America to another.

The fact that his books are so American is what differentiates Child from many other authors. Rather than restricting Reacher to New York, Boston or Los Angeles, Child moves him around the country, into a variety of different situations and circumstances.

Child's understanding of Americana isn't limited to books. Other authors have encountered disasters after selling the film rights to their novels, but Child's initial movie venture was a hit, despite a seemingly uncharacteristic choice in Tom Cruise as Reacher. Although Cruise doesn't have the physical size, I think he completely captured Reacher's presence, and Child agrees.

"Tom was amazing," said Child. "He was one hundred percent Reacher and only ninety percent of the size." Cruise is a fan of the series, as were most of the people involved with the project, and it shows. "The film also had an Indie feel, despite the big studio budget," said Child. A second film is in the works.

Personal, Child's new Reacher installment will be published Sept. 2 2014, and on Sept. 10 he'll throw out the first pitch at a Yankees game.

I won't miss either of them. 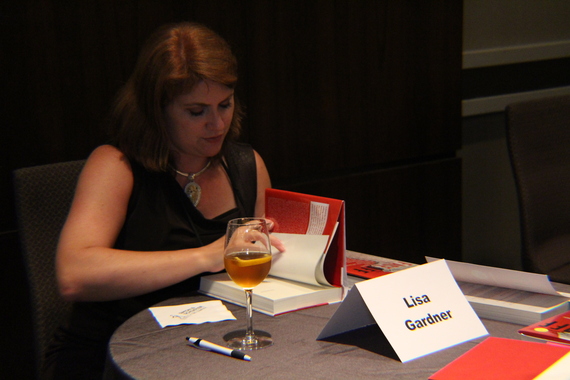 Lisa Gardner with a wine and sign at Fanfest