Last month, I attended UN Habitat's World Urban Forum, the world's premier gathering on the subject of cities and our urban future. Every two years, stakeholders from across the globe come together at the Forum to examine the most pressing issues facing our rapidly urbanizing world. Over the next three decades, 2 billion people will be added to our planet and most of this growth will take place in cities in developing countries. So, for international development organizations like mine, Global Communities, being able to hear perspectives from the growing number of policy makers, foundations, private companies and city residents that travel to the Forum is an invaluable learning opportunity.

At a huge convening with more than 20,000 participants representing over 160 countries in a mammoth convention center, it's difficult to do justice to the many important conversations and panel discussions. The host city, Medellin, Colombia, has an incredible story to tell in itself. But there were a number of themes that emerged throughout that reflect the challenges inherent in an increasingly urbanizing world. 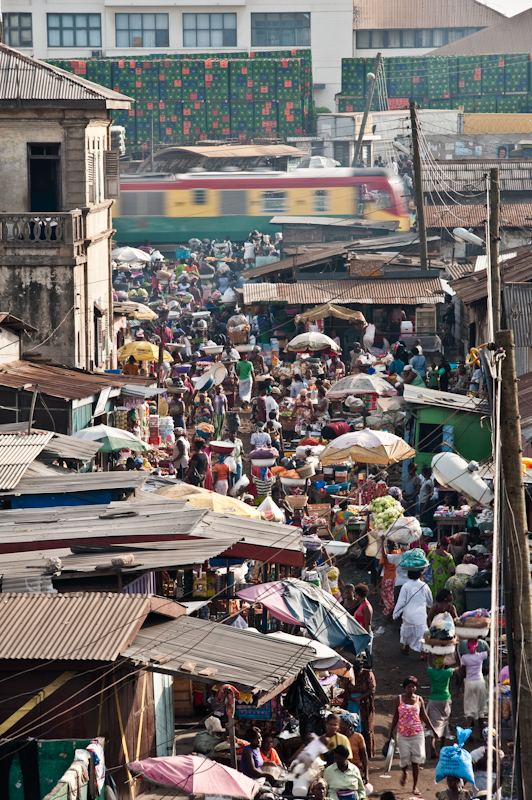 Ghana's rate of urbanization is currently measured at 3.4 percent and the country has reached the milestone of 51 percent of its 24 million people living in cities.

First of all was the importance of partnership. As our delegation mingled with other attendees at the Forum, we met with many people from local NGOs, foundations and government entities at all levels with whom Global Communities has partnered with toward the goal of alleviating poverty and creating more sustainable urban communities, including President John Dramani Mahama of Ghana, a great champion of urban development in his own country and in Africa more broadly. We all shared a recognition that the complexity of the issues facing urban centers precludes any single entity from being able to solve the problems on their own.

Second, the "urban agenda" is constantly evolving. The establishment of the United Nations Centre for Human Settlements (UNCHS-Habitat) in 1977 marked of the origin of donor commitment to urban poverty issues. In the 37 years since then, organizations like Global Communities have pioneered and piloted different urban solutions around the globe. We pioneered self-help and cooperative housing in the 1970s, housing micro-finance in the 1980s, government decentralization efforts in the 1990s, and good governance in the 2000s. Today we are faced with addressing the nexus of urban poverty, climate change and urbanization. Marginalized communities living in slums and informal settlements will become increasingly vulnerable to shocks from climate change that will disrupt economies, health, and physical assets. In some regions, violence and conflict are rising as well. For all of these reasons, urban resilience is at the top of our agenda today. I was delighted to see the Rockefeller Foundation and the Ford Foundation advance their agendas at the interactions of these issues at the Forum.

Third, it was striking to see my colleagues at a venue like this, "leading from the middle" to create new partnerships that lead to innovative solutions. As a community-focused NGO, our role is to be a catalyst to connect governors and the governed, corporations and municipalities, and the residents of cities -- especially the poorest city-dwellers, such as those living in slums and informal settlements. It is the role of organizations like Global Communities to create new partnerships and solutions by filling gaps in information, trust, and technical skills across sectors and disciplines. Janice Perlman of the Mega-Cities Project, described this growing trend in a recent blog post: "We found that the most fertile ground for urban innovation was - and still is - at the local level and at the nexus of poverty, environment, and inclusion. It is at such intersections where people must cross disciplines, sectors and silos to experiment, learn, and collaborate." By forming strategic partnerships that do just that, we can achieve the best results for urban communities around the world.

Finally, one way to reflect the importance of cities on everyone's agenda is to put them front and center in the new UN Sustainable Development Goals which will replace the current Millennium Development Goals. I had the pleasure of speaking at the Forum with Eugenie Birch, co-chair of the University of Pennsylvania's Institute for Urban Research who was nominated in Medellin as Chair of the World Urban Campaign. This Campaign is helping shape the Post-2015 Development Agenda and prioritizing urban issues in the new Sustainable Development Goals. With six out of every ten people expected to live in cities by 2030, better urban planning and management, and an integrated approach to addressing the myriad urban issues, ranging from education employment to water, health and disaster risk reduction, will be essential. With the right focus, building "inclusive, safe and sustainable cities and human settlements", as the Sustainable Development Goals Working Group has articulated it, can foster greater economic growth, prosperity and job creation, social cohesion and environmental protection.

This year's forum in Medellin is the last World Urban Forum before the UN Habitat III Conference, by which time the new Sustainable Development Goals will be decided. For organizations like ours and others advocating for a pro-poor urban agenda, these new goals will help outline the challenges we must overcome in a rapidly urbanizing world. It is for this reason that we innovate; out of necessity to help serve our evolving world. In partnership with communities across the world we can help them develop actionable plans for the coming years to meet and overcome the challenges.

One thing is certain: If the future of our planet is urban, then the actions of the past will not be enough to create the fair, equitable and smart world we want; if cities are centers of ideas, innovation and talent, we must harness all of that to build the best future for all.