In the innovation and business growth book, Robert's Rules of Innovation: A 10-Step Program for Corporate Survival, author Robert Brands sets forth ten imperatives on how to create and sustain innovation. The third imperative on the list, the "New Product Development Process" (aka the "NPD" process), is a highly critical part of the innovation in business process. The NPD process is often referred to as the Stage-Gate® Process , and according to its developers is, "a carefully designed business process and the result of comprehensive research into understanding the reasons behind product success and failure."

While the modern innovation industry's Stage-Gate Process is widely used for new product development and is supremely more effective than undisciplined development, sometimes the Stage-Gate Process is not enough, especially in cases where the new product is exceptionally innovative and mandates solving very challenging inventive problems and issues. In such instances, one may be able to improve the innovation process and ultimately achieve better results by introducing the TRIZ method into the NPD/Stage-Gate Process.

What is TRIZ?
All sorts of projects reach a point in the development process where the analysis portion of the project is complete, but it is unclear what the next step should be. To figure out the next best step, the project team must be creative to figure out what to do. Traditionally, common creativity tools and methodology have been constrained to brainstorming and similar methods, which are dependent on team members' intuition, knowledge, and orders given by somebody in a position of authority. These common creativity tools and methods are often described as psychologically based; and unfortunately, they often have unpredictable and unrepeatable results. And that's where TRIZ should come in...

TRIZ is a (Russian) acronym for the "Theory of Inventive Problem Solving", which was developed by G.S. Altshuller and his colleagues between 1946 and 1985 in the former U.S.S.R. According to the TRIZ Journal webpage, "TRIZ is a problem solving method based on logic and data, not intuition, which accelerates the project team's ability to solve these problems creatively. TRIZ also provides repeatability, predictability, and reliability due to its structure and algorithmic approach." As opposed to psychologically-based common creativity tools, "TRIZ is an international science of creativity that relies on the study of the patterns of problems and solutions, not on the spontaneous and intuitive creativity of individuals or groups. More than three million patents have been analyzed to discover the patterns that predict breakthrough solutions to problems." It also should be noted that TRIZ solves all kinds of problems, not just those involving patentable entities.

TRIZ research first began with the idea that there are universal principles of creativity that form the basis for technology-advancing creative innovations. The TRIZ researchers hypothesized that if these universal principles of creativity could somehow be objectively identified and codified, then they could be made teachable to people and make the innovation process more predictable. A condensed version of this idea is as follows:

"Somebody someplace has already solved this problem (or one very similar to it). Creativity is now finding that solution and adapting it to this particular problem."

As described in the "What is TRIZ?" section on the TRIZ Journal webpage, the three primary findings of TRIZ research since its inception are:

When to Use TRIZ?
The following graphic, developed by Ellen Domb of the TRIZ PQR Group, gives an easily-digestible answer to the question: 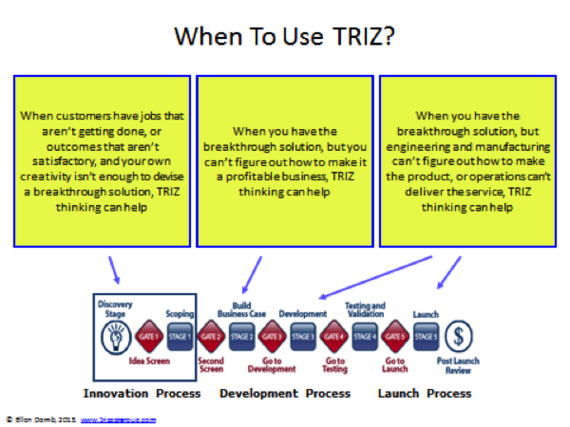 While modern industry has developed its own best practices for the new product development process, such as the popular Stage-Gate Process, it would be naïve and counter-productive to not try to introduce a new arsenal of tools such as the TRIZ approach to tackle difficult inventive problems. If properly used, the TRIZ approach and best practices such as the Stage-Gate Process can greatly benefit each other. These approaches are not rivals, but rather can be used to amplify each other's successes.