Ask me to show you a sustainable house made of fabric, and I'll show you a tent -- or a yurt. Here where I live in Southern California, "green" homes come in three flavors: concrete, reclaimed wood and corrugated steel. (Or a combination of all three, with a generous amount of glass to maximize natural light and bring the outdoors in.)

But a team of students from the Rhode Island School of Design, Brown University and the University of Applied Sciences Erfurt in Germany wants to challenge the ubiquitous blocky prefab modern look, with its architecturally unique entry for the upcoming biennial Solar Decathlon Europe competition.

The design phase is now complete, and the team will soon begin constructing an 800-square-foot solar-powered home with an enclosure made entirely of textiles.

Aptly dubbed TechStyle Haus, the amorphously elegant structure will also perform to the Passive House standard, using 90 percent less energy for heating and cooling than a traditional home -- no more than the amount used to run a hair dryer. 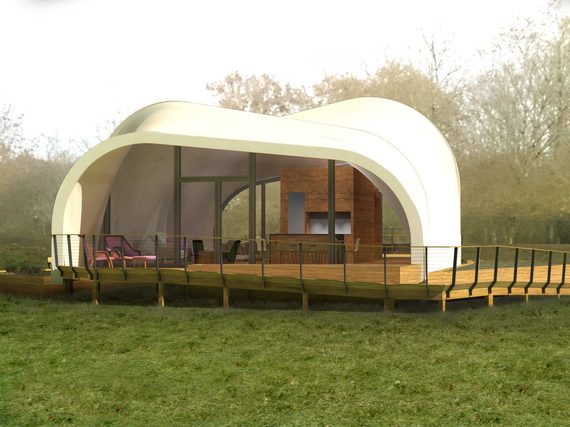 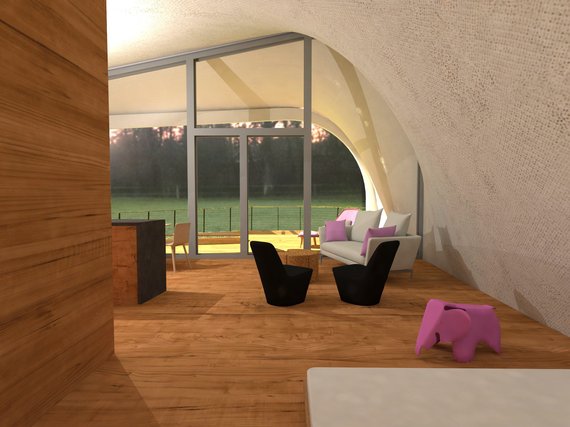 The international Solar Decathlon competition, which, like the stateside version, is sponsored by the U.S. Department of Energy, challenges students to build energy-efficient and innovative solar-powered homes. Not all teams attempt the Passive House designation, however. One made of fabric? That will be a Solar Decathlon first.

"Many teams have made passive houses in the past ... [but] they're usually dense blocks with super thick walls and small windows," says Brown student Gareth Rose, one of 50 core team members who will be taking TechStyle Haus from design to reality over the next several months. "We're aiming for a more natural aesthetic that still meets this demanding energy standard."

Flexible and lightweight enough to be shipped efficiently from Providence, R.I. to France, where the competition will be held at the Palace of Versailles from June 27 to July 14 (book your tickets!), TechStyle Haus will also have to be strong enough to weather a stiff wind, as well as airtight enough to protect its inhabitants from an in-house rain shower -- two concerns that came to mind when I first heard about the project.

As I soon learned, the team won't be working with mere canvas. The home's exterior, supported by five structural steel ribs, will be built with a Teflon-coated woven fiberglass called Sheerfill that is commonly used in commercial structures like stadiums and airports. (Saint-Gobain, the building materials manufacturer donating the high-tech textiles for the enclosure as well as the home's ultra-energy-efficient windows, originally supplied the glass for Versailles' legendary Hall of Mirrors almost 350 years ago.) "It's extremely durable," says RISD graduate student and TechStyle Haus project manager Sina Almassi. "We tried ripping it, but unless it's perforated with a knife, it's impossible."

All Solar Decathlon homes are completely solar powered, but TechStyle Haus' photovoltaic array will be flexible, embedded in the fiberglass -- another first for a residential structure. The fabric interior (a decorative knit that will lend color to the house) will be reconfigurable, in order to accommodate different functions in the home, such as a cocktail party or extra house guests.

No sudden storms are anticipated to disrupt house parties anytime soon: twelve inches of fiberglass insulation and construction membranes underneath the exterior fabric -- pulled together in a web-like configuration the team invented using off-the-shelf ratchet straps -- will create an "envelope" to reduce air leakage and seal out moisture.

As for confronting stiff winds, tests have shown that tensile structures built with Sheerfill can last more than 25 years, withholding their shape even after seasons of high gusts and heavy snow. (See Cincinnati's Paul Brown Stadium, which certainly sees its share of both.) There was initially some concern that TechStyle Haus might blow away like a kite, but the anchoring system has since been resolved.

With the innovative TechStyle team expecting to raise over $700,000 in cash, building materials and consulting expertise by June (including $100,000 already secured from Saint-Gobain), the team will likely be able to confront any additional design challenges. But according to RISD graduate student Jason Askew, the true test may not be monetary. "The real difficulty is getting people to believe in textiles as a viable option. Since what we are doing really hasn't been done before, half of the battle is convincing people it works!"