Harnessing asteroids. Sending humans to Mars. NASA has laid out some pretty sci-fi sounding plans for the next 20 years of space travel, but a more critical mission -- at least for the sustainability of human life here on earth -- may be the one it launched in Mountain View, California, just over two years ago: The Sustainability Base at the NASA Ames Research Center.

The 50,000-square-foot lunar-shaped structure is the greenest government building ever built, as well as both a testament to and test bed for NASA aerospace technology. The Base produces more energy than it consumes, powered in part by fuel cell technology developed to send the Curiosity rover to Mars. It will eventually use 90 percent less water than a conventional building, recycling its water via a version of a system deployed on the International Space Station. And all of this technology is housed in a striking LEED Platinum–certified structure that maximizes airflow and sunlight to such an extent that for 325 days out of the year, no artificial lighting is necessary. 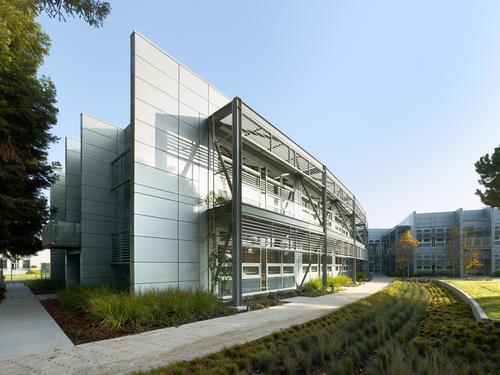 So what's it like to work in a "space station on earth"? What would it take for every place of work to be a Sustainability Base? I checked in with two innovators who were (and are, since the Base is an ever-evolving endeavor) driving forces for the project: Steve Zornetzer, Associate Director of the Ames Research Center, and Alastair Reilly, a director at the architecture firm that designed the Base, William McDonough and Partners.

Jennifer Grayson: The Sustainability Base opened just over two years ago along with some extraordinary expectations. How is it going so far?

Steve Zornetzer: From an energy efficiency point of view, the building is performing very close to what we expected. We're still tweaking it, but the bottom line is that we're producing more than twice the energy the building consumes each year.

JG: I'd say that's a lot. Where does the excess go?

SZ: That extra energy, which amounts to about 1,400 megawatt-hours per year, is put back into our Ames grid and used by other buildings on our campus. [Note: For a nifty comparison, that's the equivalent of the total wind power capacity of Romania.]

Alastair Reilly: Even before plugging in all of the technology, the building's design -- the thin plates, tall ceiling heights, maximized daylight and open floor plan -- put us at an energy reduction in the 50 to 60 percent range compared to a conventional building. It's also in a special location with a great climate. You can [minimize energy] by opening your windows.

SZ: The occupants of the building love the light; they love the fresh air. They love that the building is quiet, too. It doesn't have any noise associated with heating or air conditioning or any of the things that most traditional buildings do.

JG: The California climate is really great. The record drought, however, is not. How are you minimizing water consumption?

SZ: We're using a version of a brand-new NASA technology that's currently being used on the International Space Station to support water recycling for six astronauts. Our original goal was to use 90 percent less potable water than a conventional building and we're at about 70 percent at this point. I'm confident we'll get there.

JG: I read the astronauts up there are drinking water made from recycled urine. Is that what you're doing here?

SZ: The system has the capability of doing that but we've chosen not to use it for blackwater recycling at this point.

JG: I know some public toilet-to-tap programs have had a tough time with their constituents getting over the ick factor.

AR: The major setback on the recycling of blackwater beyond the added cost has been local codes. The California health department monitors blackwater reuse and it can still be an onerous process to navigate.

SZ: We're taking all the graywater that the occupants generate from sinks and kitchenettes and showers -- what normally would have gone down the sewer and into the storm drains -- and we capture it and clean it up. It's actually at a potable drinking standard, but we're putting it back for urinal and toilet flushing so we're not wasting potable water for that purpose.

JG: What other NASA technologies are being tested at the base?

SZ: The other main NASA technology is what I call the intelligent adaptive control system. When it's completed, it will control all the building's primary systems -- the heating and cooling, the opening and closing of windows, artificial lighting in different zones of the building ... It will learn from its own experience and adjust its own software accordingly so that over time, it will optimize its own energy performance.

AR: This isn't just a smart building; it becomes almost a genius building.

JG: Sounds very HAL 9000-esque. But in a good way. How much more energy will the system save?

SZ: We're at about one-and-a-half watts per square foot using the current technology. By some back-of-the-envelope calculations, I think we can tweak it by maybe another 30 percent if we can fully optimize things.

JG: That's impressive, considering how plugged in the NASA engineers working there must be. I imagine a lot of screens and laptops.

SZ: Through the cloud we're able to record and manage the electrical use of all of the equipment [employees] are using in their work spaces. It was actually surprising to us how much energy a screen saver uses.

AR: It's what we refer to as almost the Prius effect. You've got this real-time user interface where you can let off the foot pedal or do different things to game the system and get that efficiency.

JG: I was just going to say: That sounds like my Prius dashboard.

SZ: It's biofeedback. We have a Prius also, and my driving behavior has changed dramatically. Our employees are taking what they're learning about energy efficiency in a building like this and changing their behavior at home.

JG: Could you imagine if every government building could produce twice the energy it consumes? I read that the federal government alone controls some 10,000 buildings.

SZ: Right now the government is strapped for cash. Funding is an issue. But I think mindsets are changing as people begin to realize that climate change is real. My vision is: Could you just imagine if every new building built on earth could produce more energy than it consumes? How that would change the paradigm, what that would mean for society and our planet?