If there's one prediction I can make about our future world, it is this: There will be a lot of tires.

The latest forecast puts 1.7 billion cars on the road by 2035; assuming that three-wheeled-cars like the Elio won't have overtaken the world in the next 20 years, we're looking at close to 8 billion tires rolling along -- nearly one for every human being then on Earth. And that's just for cars on the road. We're not even counting trucks, motorcycles, tires in retail stores, old tires, or the ubiquitous tire swings in my Orthodox Jewish neighborhood of Los Angeles. (Lots of kids to entertain!)

Let's be honest: envision a world approaching 2 billion cars, and tires may not be the sexiest of ecological conundrums to first consider. If you've seen recent photos from a smog-choked Beijing, you know that air pollution is the more immediate problem; and with an 8-year-old girl now China's youngest lung cancer case, it is certainly the more profound.

Then, too, there's the issue of fuel. In the U.S., the cars we already drive consume nine million barrels of gasoline a day, nearly 50 percent of our total oil consumption. In just a few years, China, now the largest car market in the world, will consume even more oil than we do.

But back to tires. It takes seven gallons of oil to produce one tire, true, but most cars use more than that in a single fill-up. The real issue will be finding the natural resources to produce all that rubber (tires are a mix of petroleum-based synthetics and natural rubber).

Up until very recently, Hevea brasiliensis, also known as the rubber tree plant, has been the sole source for the industry, but there are real problems with this. The expansion of rubber tree plantations to fuel China's ever-expanding tire industry, for one, has devastated its own tropical rainforests.

Another issue is that the vast majority of Hevea -- 90 percent -- is grown in Southeast Asia. The true tragedy of Typhoon Haiyan is human, of course; but the warning to any company with a vested interest in this one plant, in this one corner of the world, on a planet facing stronger storms and more severe flooding in the face of climate change and sea level rise should be: diversify. 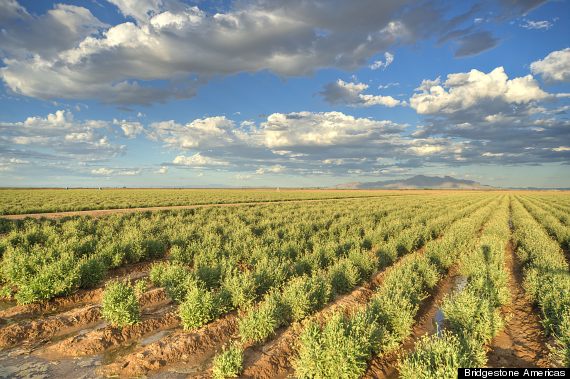 Native to the southwestern U.S. and northern Mexico, the guayule plant produces natural rubber in its bark and roots. It also requires little water and no pesticides. "It's on par with Hevea on a per-year, per-acre basis from a productivity standpoint," says Bill Niaura, director of new business development for Bridgestone Americas.

The plant holds much promise: Because its rubber and the rubber from Hevea are virtually identical, it can be used in tires without any change to Bridgestone's manufacturing infrastructure, once the material is extracted and processed, says Niaura.

Of course, the company will be testing guayule extensively. A new biorubber research center is being constructed for that very purpose farther north in Mesa, Ariz. It's expected that the first experimental guayule tires will be made and ready for evaluation in mid-2015. (The research farm recently completed its fall planting, which will be supplying the first guayule biomass to the Mesa research center.)

One potential downside of guayule, however, is that unlike Hevea, which can be tapped for its latex for up to 30 years (older trees yield more sap), only a small fraction of the guayule shrub -- five to seven percent -- contains rubber. But managed properly, stresses Niaura, the leftover plant material, known as bagasse, could provide an opportunity to create a new source of sustainable energy.

The bagasse could even be converted into a petroleum-like oil for the tires themselves. (Other companies are doing this, too. See here and here. Bridgestone, it's worth noting, already makes some agricultural tires that use soybean oil instead of petroleum.)

Exciting as this all sounds -- especially given the potential for a new homegrown market and the jobs that go with it -- I can't help but wonder: Why can't we just make new tires out of all the old ones? There are at least 275 million scrap tires in stockpiles in the U.S., after all. Unfortunately, says Niaura, this isn't a possibility, given current technology. "A tire is a fully vulcanized material, so it is different from the raw materials that went into making it the first time around," he explains.

Bridgestone's 100 percent recycling rate is laudable, true (though it's technically downcyling, since the tires are made into things like athletic turf, playground equipment and the like), but somehow I don't feel satisfied. X Prize, anyone?