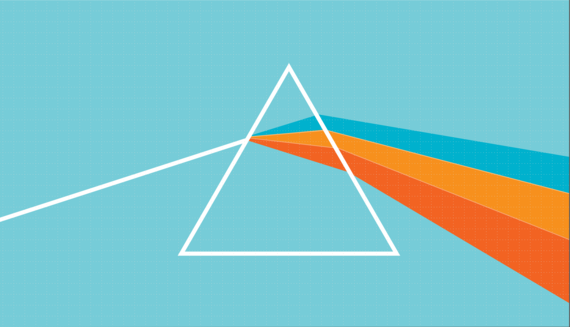 Apologies to Star Wars fans, but this post is inspired not by Darth Vader but by a release that pre-dates George Lucas's original film by about 4 years. The title draws inspiration from Pink Floyd's epic album Dark Side of the Moon. Or more precisely, from the image immortalized as album art which, over time, legions of music lovers have pondered just a little longer than necessary. It was indeed a recent pondering of said vinyl cover which inspired an idea about the nature of what makes innovation teams effective.

For anyone unfamiliar with the image, it is a simple one: a drawing of the refraction of light as it passes through a prism. It is portrayed against a pitch-black backdrop - no words, no frippery - to draw attention to the dispersion of white into the colors of the rainbow. Of course, as many liked to believe with most 70s rock albums, it can be 'played' backwards as well - to be seen as the recomposition of the spectrum back into a stream of white light. I can't claim to be an expert on the physics of light, but the image triggered a reflection on how innovation teams can serve as a prism to play two essential roles for their business: dispersion and re-composition.

Dispersion. First, innovation teams can play a pivotal role in taking an idea spurred by a core business line and refracting it into something more magical. My firm is perhaps best known for our research into the Ten Types of Innovation®. The basic gist of it is that for too long, companies have had a knee-jerk reaction to immediately look primarily at product innovation when it comes time to grow. We have discovered that in fact there are nine other "types" of innovation which, when combined effectively in various ways into a self-reinforcing platform, have a much higher likelihood of driving profitable growth than focusing on product or technology alone. Those other Types include - among others - innovating around a Profit Model; or the Networks (i.e. external partnerships) that you maintain; or the Brand and Channel that you use to take an innovation to market.

The most common challenges for companies that attempt to make better use of the Ten Types are twofold. First, doing so means breaking down organizational siloes to work in concert between - for example - R&D, Finance, and Marketing / Sales in order to imagine and deliver something new to market. Second, effective innovation platform development requires an understanding of the combinatorial patterns that have worked in the past, and that simply requires experience and expertise that can only be built over time. A company cannot expect its core business, which is focused on delivering here-and-now performance efficiently and predictably, either to build that expertise or simply to break down siloes. These are precisely the roles that innovation teams should play - whether they sit within business lines or at the corporate center.

Take for example the moves that Chobani yogurt made to expand beyond the core business model of manufacturing and selling yogurt. Apart from being on the early side of the trend towards strained Greek yogurt, founder Hamdi Ulukaya approved the donation of 10 percent of profits to charity and offered employee stock dividends worth 10 percent of the company. In addition, a retail store in New York City's Soho neighborhood has become a testing ground for new product configurations that have since made their way onto grocery store shelves, where purposefully designed packaging helps Chobani stand out from the competition - a design enabled by an in-house proprietary plastic manufacturing process. In ten years the company has grown from 5 to 2,000 employees and now commands over 40 percent share of the US Greek yogurt market.

Innovation teams within any company can learn a lesson from Chobani: take an idea spurred by a core business which leverages just one Type of innovation and refract it into something more competitively advantaged by layering on other aspects of business model innovation.

Recomposition. Innovation teams can play a second and equally critical role in 'playing it backwards.' For any specific opportunity there are dozens - maybe even hundreds - of relevant moves that other companies have made, often in completely different markets or industries, from which lessons can be learned and ideas stolen. Understanding which ones to pay attention to and applying the learning laterally is what good innovators are great at. Innovation teams can make sense of the 'spectrum' of noise in the outside world and turn it into a concentrated beam of insight that the company can apply to its innovation efforts.

The Ten Types of Innovation can also be used as a valuable tool in this recomposition. At Doblin, we have used the Ten Types to start codifying 'plays' that we see show up time and time again. We've seen business models such as Collaborative Consumption, Radical Optimization, Experience Ecosystem and dozens more - all of which can be deconstructed and defined using specific tactics within each of the Ten Types - replicated in surprising ways when applied to new industries or products. Acting as the prism for growth efforts, an innovation team should constantly sort through the myriad models and multiple colors of innovation examples in the outside world and concentrate their power into something cohesive and sensible for their company.

Am I, like the music enthusiasts I mentioned earlier, reading a little too much into an album image from 40+ years ago? Yes, probably. But isn't it curious that Messrs. Waters and Gilmour chose song names strikingly relevant to the job of innovation for their classic album? Time, Money, Us and Them, On the Run and Eclipse all show up on Dark Side of the Moon. Coincidence? I don't think so.