This is the second in a series about the changing models of corporate innovation co-authored with Evangelos Simoudis. Evangelos and I are working on what we hope will become a book about the new model for corporate entrepreneurship. Read part one on the Evolution of Corporate R&D.
----
Innovation and R&D Outposts
For decades large companies have set up R&D labs outside their corporate headquarters, often in foreign countries, in spite of having a large home market with lots local R&D talent. IBM's research center in Zurich, GM's research center in Israel, Toyota in the U.S are examples. 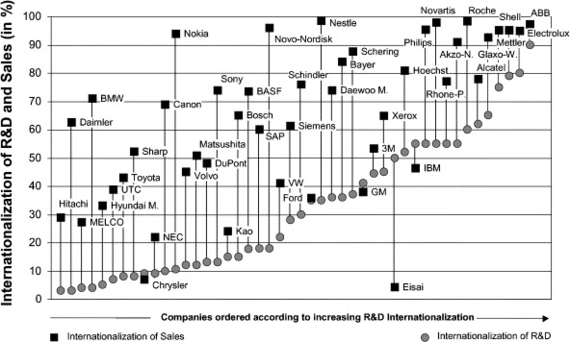 (An Innovation Cluster is a concentration of interconnected companies that both compete and collaborate. Silicon Valley, Herzliya in Israel, Zhongguancun for software and Shenzen for hardware in China are examples of technology clusters, but so was Detroit for cars, Hollywood for movies, Milan for fashion.)

In the last five years, hundreds of large companies have established Innovation Outposts (and here) in Silicon Valley. The charter of these Innovation Outposts is to monitor Silicon Valley for new innovative technologies and/or companies (as emerging threats or potential tools for disruption) and then to take advantage of these innovations by creating new products or investing in startups.

While that's the theory, the reality is that to date, most of these Innovation Outposts are at best another form of innovation theater -- they make a large company feel like they're innovating, but very few of these outposts change a company's product direction and fewer impact their bottom line.

Companies who want their investments in Silicon Valley to be more than just press releases need to think through an end-to-end corporate outpost strategy.

Advertisement
This series of posts offers companies the tools to develop an Innovation Outpost strategy:

After working with over 100 companies, Evangelos and I clearly see that some of these five responses are more effective than others. Moreover, the speed of the response is as important as the ability to respond. Corporations that establish Innovation Outposts often lose on speed, not on their ability to sense. What makes an outpost an effective contributor versus one that's simply an expense item starts back at corporate headquarters with a company's overall innovation strategy. So before we talk about the tactics of establishing an outpost, lets think about what types of discussions and decisions should first happen at the "C-level" before anyone leaves the building.

The next post will describe The Six Critical Decisions to Make Before Establishing an Innovation Outpost.