Every September for the last ten years, there is a gathering in Providence, RI that brings together people who are passionate about innovation and change. This year was #BIF10, held by the Business Innovation Factory. While the summit is about innovation, after attending for the second time, I'm learning what really creates innovation isn't money, or disruptive ideas, it's people. One of my biggest takeaways from BIF last year didn't occur until after the summit was over.

Start With One and Listen Deeply
When David Bolinsky began to tell us his story, it started with how he began getting involved in art, and eventually animation, in the medical field. While there were several important points he shared, most were masked in statements that got laughs from the audience. Just when we thought this was going to be a story about his animation, it turned out to be about a trip to China and his encounter with one young girl. I won't share the entire story, but you should watch it when it's available to learn how one conversation changed everything. The major takeaway for me was: we don't have to change a neighborhood, company or even the world to make an impact. We just need to listen to one person to change a life.

Stop Covering
Dorie Clark told us her personal story about often being mistaken for a boy when she entered the ladies bathroom. She learned how to turn this internal conflict into confidence. This set the stage for the rest of her talk that showed increased job satisfaction rates for those who were "out of the closet" compared to being "in the closet." What opened my eyes up, was the term "covering." Covering is when you aren't "in the closet" but you are not standing tall and proclaiming it. This could be the person who shares their sexual orientation with friends and family, but never talks about it at work. Or it could be seeing a doctor about your depression, but never letting friends and coworkers know about it. Over half of all Americans are covering, including almost half of all white, straight males. When we become vulnerable and stop covering, as Dories has successfully done, we no longer have anything to hide. We can start to become more productive and more creative through embracing ourselves for who we are.

Broken
Angela Blanchard shared an insight that most overlook: "You can't build on broken" Too often we tend to focus on what's not working and attempt to fix it. If the foundation is weak, everything you build upon it will eventually collapse. With the work that Angela and her team at Neighborhood Centers do in strengthening underserved Houston neighborhoods by bringing together resources, education, and connection by working with neighbors side by side, they focus on what is working, and why, and then build on that. You'll get more people to join in when it's not changing what they do, but amplifying what they are already doing that works. 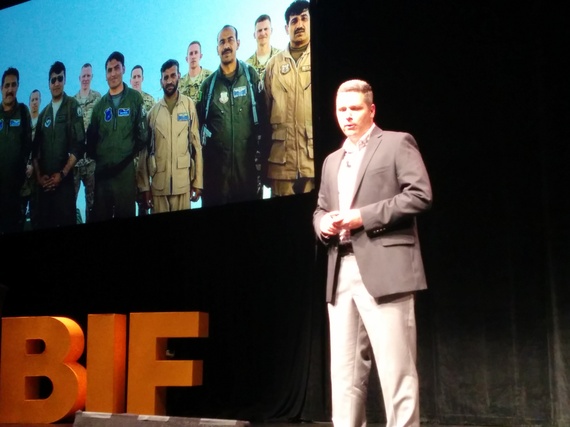 Simplify
When he took over a team to train the Afghan Air Force, Colonel Matthew T. Fritz saw his budget and timeline slashed. One of the ways they innovated was by taking complex training processes, that were understandable to them, and getting input from others. What they learned, once they invited anyone they could find (rank, civilian, even the janitor), was that if you weren't familiar with the processes, they were in fact, extremely complicated. By the time they got the processes simplified, they successfully reduced the training times and have more Afghan planes being flown and maintained. By bringing in others' perspectives, they built solutions based on empathy and listening. The key to keeping it simple is to view it as others would, not as you do.

Community
Arlene Samen shared that understanding what will work comes from listening and building trust. Listening comes from trust that results from being part of a community, not an outsider implementing what you think will work. People in the community recognize you understand what is important to them because you have committed to learning from them and not trying to change them. By becoming part of these villages, Arlene and her organization have seen zero maternal deaths in Tibet. Effective solutions come from understanding the issue as a member of the community, not an outsider.

We are all innovators. If we start with ourselves, and the relationships we form, we have the building blocks for creating purposeful change that will touch the lives of many. And anything becomes possible.