Sustainable housing has been on the minds of many East Coast residents in the wake of Hurricane Sandy. A number of the storm's survivors remain displaced or homeless in the face of the impending winter, and so the need for progressive shelter designs has become an ever-pressing dilemma.

Wouter Kalis and Corinne de Korver are two Dutch designers who have long been aware of this looming dilemma and the overall importance of sustainable accommodations throughout the world. Based in Amsterdam, the duo are dedicated to socially-conscious designs that incorporate simple and often recyclable elements, such as their most recent piece, "Social Unit." Devised as a solution for aid organizations in Holland, the cupboard bed space is part sleeping compartment, part storage space that fits the basic sustainability criteria: they are compact, inexpensive, durable and east to maintain. The Social Units are produced entirely from consumer plastic waste such as bottle caps and beer crates, manufactured using woodworking techniques no more complicated that sawing, drilling or cutting.

The innovative dwellings were recently recognized by One Hundred Days, an international juried art competition launched by Contaminate NYC. Challenging artists to adhere to the design principles of sustainability, the organization recently showcased Kalis and de Korver's Social Units at the Cappelini Showroom in New York City. In the run-up to the exhibit, we had the chance to chat with the Dutch duo over email, who filled us in on the inspiration behind their creation and their plans for future design programs in the US. 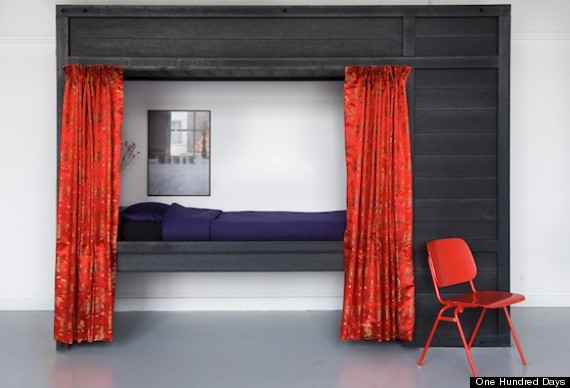 HP: How did the idea for the Social-Unit come about? Were you inspired by a specific phenomenon in Holland?

Wouter Kalis and Corinne De Korver: By accident, we learnt about the conditions of homeless shelters in Amsterdam. Although shelters offer people a single room in the Netherlands, the rooms often are full of broken, chaotic interiors with not enough storage space for all personal belongings people carry around. So, we decided that to fit the mission to help people to find their way back into society, an interior should also be inviting and with positive signals.
We talked to the staff of Salvation Army and they told us furniture should be easy to clean and as they call it 'gorilla proof', really strong. We found this recycled consumer waste plastic, made of bottle caps and beer crates, and that triggered it. We decided we wanted to make a design that was functional, durable and green. We created a modern version of the historical Dutch 'cupboard bed', that was traditionally built into a wall to preserve warmth and have some privacy in large families. And with a psychological side effect: it should make people feel secure and comfortable, give them their own private space. Even though the rooms are for one person, still the effects were clearly noticable from the pilot we did with Salvation Army Amsterdam.

HP: Your design is functionally innovative, yet at the same time you've created an aesthetically pleasing finished product? How did you balance the two concepts -- functionality and aesthetic?

WK and CDK: We design solutions for problems or improvements on situations, using recycled materials and a social component in our production. Meaning we involve people with a distance to the labour market in our projects. Either homeless people, people with a mental or physical handicap or ex convicts for example. For us functionality and aesthetics are equally important. We don't just design for beauty even though we feel obliged to design as aesthetically responsible as possible. We find beauty in simplicity and function as well as in aesthetics. Design and beauty are inextricably linked.

HP: Did you draw inspiration from any architects or designers in particular who you feel have treated this balance in an effective way?

WK and CDK: We are very much inspired by artists, architects and designers such as Mies van der Rohe, Tadao Ando and Piet Mondriaan. In general, Japanese design, combining function and esthetics in a poetic way, is very inspiring to us. Less is more, we try to minimize as a concept.

HP: Where do you see the Social-Unit functioning best? Is there a specific urban area in which you could really see this idea taking off?

WK and CDK: The funny thing is, we are designing for opposite markets and although it may sound strange, it works for us somehow. We have the Salvation Army as our client, and at the same time we were invited by a London design gallery to produce a luxury double version of our bed, according to the same principles. We are looking into college dorms, design hotels, shelters and high end design consumers all at the same time. And now that we won this competition with the show in New York, at the Cappellini showroom, we already had a lot of people telling us that we could also use a similar design to service to governments for disasters such as Sandy.

HP: Do you have plans for creating more units like these? Or is there another project on the horizon?

WK and CDK: We have a lot of different ideas on the shelf. For us, we find it a great challenge to make designs that solve problems, using consumer waste plastics and having them produced in workshops by people with a distance to the labor market. Right now, we are making the units in the Netherlands and starting production in the UK, but we would love to operate more internationally. Maybe designing smaller products that solve different problems. For instance we would love to start a social work program here in the US. The plastic material is available everywhere in the world and so are people in need of a job in a social/sheltered setting.