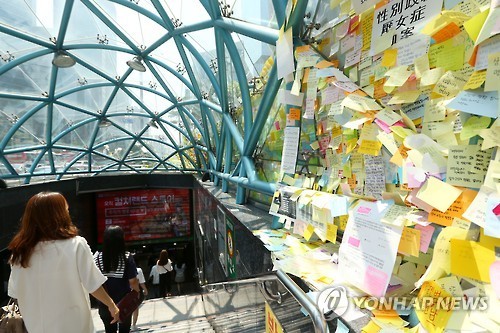 [The wall at exit 10 of Seoul's Gangnam Station is covered with memos left by citizens, in memory of a woman who was stabbed to death by a stranger in a nearby public bathroom back in May. The murder case triggered debate on misogyny in Korea, as the crime was motivated for the murderer's hatred towards women.]

AsiaToday reporter Lee Mi-hyun - The term "misogyny" has been bandied around in the newspapers, TV, and everyday conversations quite often since earlier this year in South Korea.

Misogyny has been often covered by newspapers along with heavy issues, such as radical Korean feminist community Megalia, Gangnam murder case, Nexon's replacement of voice actress, and more.

We wondered what would Koreans think about misogyny in reality, not on the Internet. So we asked four ordinary Korean men and women about their thoughts on misogyny. Foreigners also gave their thoughts, too.

- Misogyny doesn't exist. I think some of minorities made the term 'misogyny' to highlight some women's shortcomings.

- I believe that 'gender war' frame has been excessively reported online rather than the fact that misogyny actually exists. I've never seen any men around me with misogynistic mind.

However, there are many people who think that men experience more unfair treatment than women when it comes to relationship, due to conventional way of thinking that man should generally win favor with woman.

- I think misogyny exists in Korea. Of course, there is nobody around me who leaves such misogynistic comments online.

But sometimes I see some men, who are usually very nice and smart, have misogynistic minds without any intentions. Depending on your gender, people make different judgments of the same action. Besides, there are some specific attitudes and characteristics required only to women.

By contrast, there are no terms for men who do the same actions as mentioned above. There are used seldom, if ever. For instance, there are many men who would often drink expensive coffee at café. But nobody would blame them for doing so. Besides, car accident rates are lower for women drivers than men drivers. (Reporter's note: A study showed that last year's car crash rate was 0.34 per 100 women drivers and 1 per 100 men drivers.)

A few years ago, there were rumors spreading online that voting rate of women in their 20s accounted for only 8%. Since then, I've seen many comments saying that young women these days are pathetic.

Then people start to use problematic words that are used in a gender negative way for women, and those words become frequently used ones. Then both men and women start to use them without realizing the problem.

I think this frame itself is misogyny. No one thinks it's strange because everyone is familiar with it.

Of course, I hear this kind of conversation in real life as well.

At my working office, I heard two male managers saying that women don't have to go to a good college and the only thing that women should be concerned of is marrying well. There was a boss who even told me, "If you're not a morning person, how would you prepare breakfast for your husband?" He said, "My wife works, too. But she prepares breakfast for me."

In addition, there are problematic sayings that are commonly used in this society, such as "Woman's beauty peaks at early 20s and declines since then."

- Misogyny doesn't exist in Korean society. I think it's a problem for few people.

However, I think this is hardship our society has to face as times change.

It's true that Korean women had to endure abusive circumstances in traditional Korean society, sacrificing themselves to do all the house chores and raise children as wife and mother.

And now they want to live in a society where everyone is treated equally and participate in society as men do.

Although that's the direction the society should go to, it's not settled yet.

As a result, some women today shout for their rights while not taking responsibility. In workplaces for instance, you also have to deal with chores such as moving heavy boxes or cleaning up the office besides your team project. Then I find some female employees who would run the easy things and leave men to do the physically hard things. Of course, men are generally physically stronger than women, and normally they would do the physically demanding things. But some women take men for granted.

There are few women would think, 'Oh, I can't do it because I'm a woman. But I should be treated equally for other things.' They believe that men must buy a house to get married, thinking, 'I'm the one who would give birth to a child. It's fair for women to buy furnishings for the home.'

If we look at it the other way round, there are some men claiming that they face reverse discrimination. According to them, traditional Korean men had to buy a house to get married and earn money for family, and now men is supposed to do house chores and raise a baby together as well.

I think this kind of social atmosphere played a part in widening the gender split. 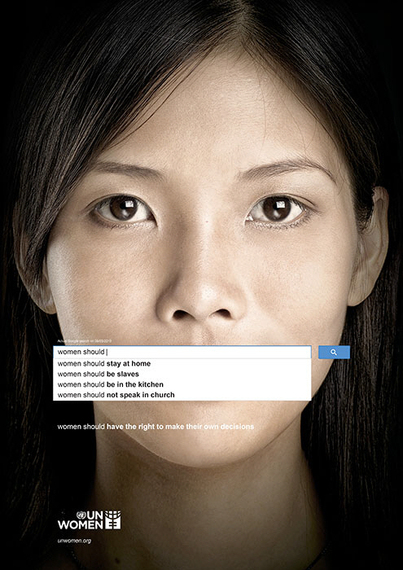 [An ad campaign developed for UN Women, reveals how pervasive discrimination against women is through the use of genuine Google search suggestions. The campaign features a close-up of a woman's face with autocomplete results for terms like "Women should.." placed over her mouth./ Source: UN WOMEN, Memac Ogilvy & Mather Dubai]

- Misogyny is not valuing women as a person. This usually manifests itself as only valuing women for sex and not for their intelligence.

I think misogyny exists everywhere, but it is more pronounced in Korea. I've noticed it in my time here and I think a big part is the sexualization and infantilization of women that is even more pronounced than in the US.

I think the biggest issue is the media and advertisement. Another issue is protective legislation that can fight back against the culture.

Where I am from there are many laws protecting women who are in violent relationships or subject to abuse by husbands or romantic partners along with anti-discrimination laws that protect women's rights. In Korea there are none. This is shown also in the fact that in Korea on average women make 2/3rds less than men in the same jobs.

- To be honest, I'm not sure what misogyny is about. I don't know if misogyny exists in Korea because I haven't experienced it.

But in my experience of staying here, Korean women seemingly find the pressure to engage in plastic surgery procedures. So I think bad-looking women could face discrimination.

Misogyny is still a controversial concept among the public in South Korea.

There is significant debate about whether misogyny exists or not. And the most controversial point is the extent of misogyny.

What does "misogyny" really mean?

The Oxford English Dictionary defines "misogyny" as "dislike of, contempt for, or ingrained prejudice against women."

In fact, the Dictionary of Literary and Critical Terms, the only Korean dictionary that has the word "misogyny" as its headword, defines "misogyny" as "the belief that women are intellectually inferior, emotional rather than rational, infantile, and sensual."

※ The next interview will share opinions on Gangnam murder case, changing gender role, and misogyny controversy that heated the Korean society.