Bullies are loathsome. What's occurring this very second as I pen yet another article about Japan's odious sense of entitlement over all sea life is the gory, brutal and inhumane bloodlust in the Taiji cove as the War Against Nature is raging, again. 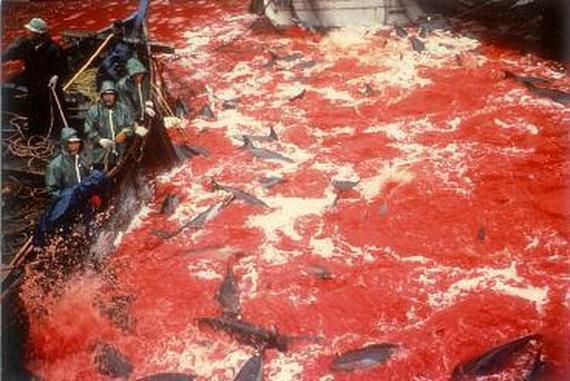 This sickening sight fraught with unimaginable pain must come to an end -- Amnesty for all dolphins and whales now! Photo courtesy of OccupyForAnimals.com

How long do the other 'civilized' nations intend to sit on the sidelines and allow Japan to kill and poach sentient bottlenose dolphins, other small-toothed whales and magnificent endangered baleen or filter-feeding whales?

This much we do know with certainty: The oceans are ailing, terribly. And as Captain Paul Watson of the Sea Shepherd Conservation Society continues to remind us, "If the oceans die, we die!" 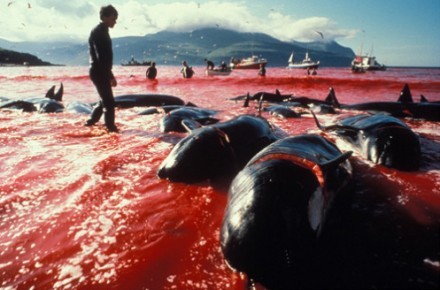 It's time for this senseless bloodlust against the dolphins and whales to end, now. Photo courtesy of Moral Low Ground

On Friday January 17, 2014 Sea Shepherd once again sounded the emergency alarm as five pods of Bottlenose dolphins or about 250 creatures were penned up off the coast of the infamous and ignoble town of Taiji, Japan.

Twenty-five dolphins have been mercilessly separated from their families and captured for the live-trade and burgeoning dolphinariums of SE Asia and the affluent oil-rich Middle-Eastern countries. 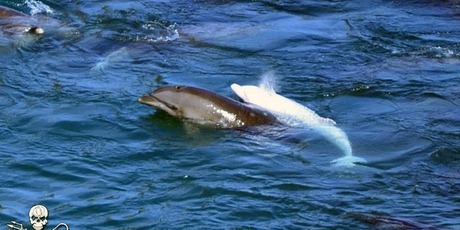 An extraordinary and rare example of an albino Bottlenose Dolphin. It will be separated from its mother and sold like a mundane slab of beef. How absolutely shocking and unconscionable. Photo courtesy of Sea Shepherd Conservation Society

One of the juveniles is a rare albino or all white Bottlenose. Indigenous Peoples around the globe consider these 'spirit' animals as sacred. This beauty of a beast will be separated from its mother and either sold into enslavement as a live performing animal or slaughtered and feasted upon by unconscious nouvelle riche gluttons.

The remaining 225 Bottlenose or so will be slaughtered slowly with spears for a multi-million dollar heartless, bloodthirsty industry.

It is prudent for all humans to consider what the Cree Nation has written about The War Against Nature: 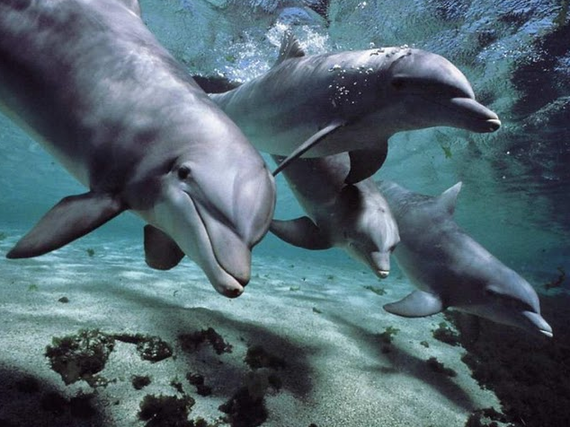 Bottlenose Dolphins and humans share many similarities including disciplining our young and solving problems. Photo courtesy of theTaijiList.blogspot.com

Did you know that humans and Bottlenose Dolphins appear to be the only known animals to spontaneously interpret images on a screen without prior teaching? Dolphins are capable of highly flexible behavior, and therefore are considered intelligent. Moreover, Bottlenose dolphins remember the signature whistle of each individual pod member even when separated for more than two decades, making them champions for the longest memory among non-human species according to scientists at the University of Chicago. Interestingly, just like human teenagers experiment with hallucinogenic drugs so, too, do juvenile Bottlenose. They carefully manipulate Pufferfish (rather aptly-named) to release its toxins, pass it amongst one another like a joint of marijuana and then drop into a trance. This deliberate behavior appears to carry some of the hallmarks of human drug use. Clearly, human and Bottlenose are very similar creatures. 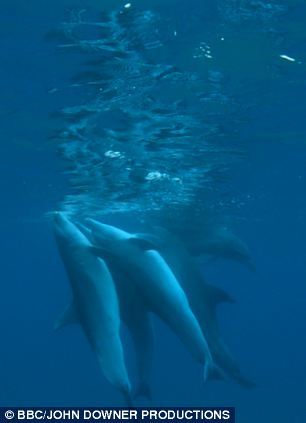 Bottlenose juveniles like to experience the high from Pufferfish poison not dissimilarly to juvenile Earthlings as they, too, experiment with mind altering plant drugs. Photo credit BBC John Downer Productions

Bottlenose dolphins are of paramount importance for ecosystem health as they cull weak, unfit, old or sick prey thus preventing diseases from becoming epidemics throughout our oceans.

Let me remind you that the prolonged global looting spree on other crucial predators like sharks of at least 73 million slaughtered each year are also impoverishing our oceans. This is ecocide and crimes against humanity. 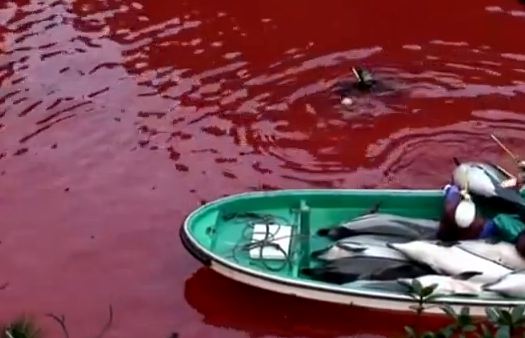 Earthlings are knowingly annihilating the exquisite tapestry of life or Earth's biodiversity. The strength of an ecosystem depends upon the diversity of species. By killing biodiversity, we are killing ourselves; and it's happening very quickly, globally.

The London-based Environmental Investigation Agency claims more than one million small-toothed whales, dolphins and porpoises have been slaughtered off Japan in the past 70 years. 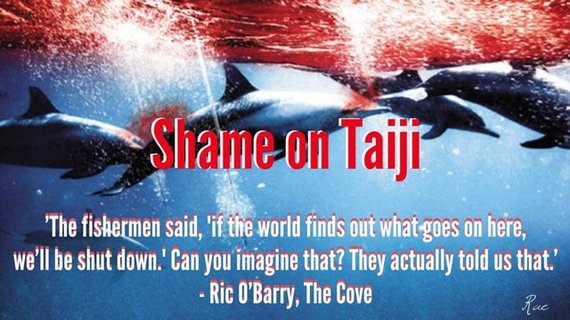 What kind of a world are we leaving our children? From the Academy Award-winning The Cove

It's time now for Japan to end their barbaric practices against conscious cetaceans (dolphins and whales) or face the backlash of millions of Earthlings refusing to visit their nation thereby punishing their lucrative tourism industry.

There's only one way to contend with a bully -- head on!