With massive dinosaurs towering above, tiny female insects called thrips had just dusted themselves with hundreds of pollen grains from a gingko tree more than 100 million years ago when they perished, only to be preserved in tree resin called amber.

The discovery, detailed this week in the journal Proceedings of the National Academy of Sciences, is the oldest known record of insect pollination.

(Pollination occurs when either the wind or an animal, mostly insects, deliver pollen from a plant's male reproductive organ to the female parts either on the same plant or another one.)

During the lower Cretaceous Period when the newly discovered thrips lived, flowering plants would have just started to diversify, eventually replacing conifers as the dominant species, the researchers said.

"This is the oldest direct evidence for pollination, and the only one from the age of the dinosaurs," study researcher Carmen Soriano said in a statement. "The co-evolution of flowering plants and insects, thanks to pollination, is a great evolutionary success story." 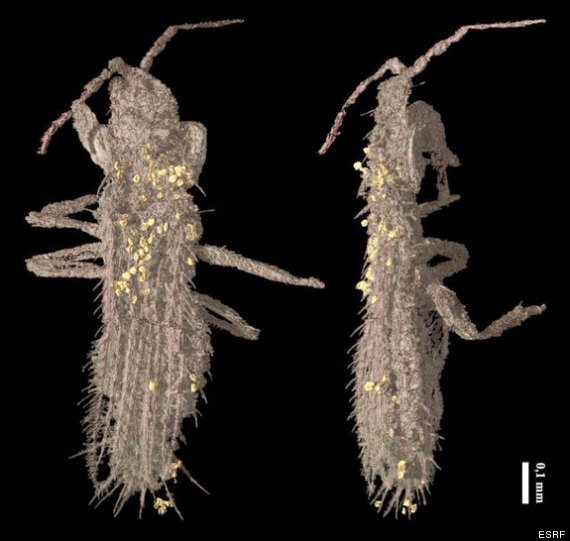 A synchrotron X-ray image of the specimen of Gymnospollisthrips minor, showing the pollen grains (yellow) covering its body.

Soriano and an international team of scientists studying the two pieces of amber, which were discovered in what is now northern Spain, say the specimens date back between 110 million and 105 million years ago. [Photos of the Ancient Pollinators]

They found six female thrips, also called thysanopterans, enclosed in the amber, with hundreds of pollen grains attached to their tiny bodies — the insects are just 2 millimeters long. The thrips, the researchers found, belong to a new genus now named Gymnopollisthrips, with two new species, G. minor and G. major.

After the amber pieces' initial discovery, they were then kept in a collection of the Museo de Ciencias Naturales de Álava in Spain.

To get a closer look at the pollination event frozen in time, the team used synchrotron X-ray tomography at the European Synchrotron Radiation Facility (ESRF), focusing on the most representative of the amber-encapsulated thrips. In synchrotron X-ray tomography, charged particles are sent speeding through magnetic fields; these particles release high-energy light that can then pierce opaque materials to reveal three-dimensional, high-resolution images.

The images revealed various features of the pollen grains, together suggesting the grains came from a kind of cycad, or gingko, tree, the researchers said. Gingkos have separate male and female trees, with males producing small pollen cones and females bearing ovules at the ends of stalks that develop into seeds after pollination.

The researchers wondered what these pollen transporters would've gotten in return for their services so long ago. The benefit must have been the opportunity to pick up pollen food for the thrips' larvae, said the researchers, adding that this benefit would have nudged the emergence of the ringed hairs specialized for pollen transport.

"Thrips might indeed turn out to be one of the first pollinator groups in geological history, long before evolution turned some of them into flower pollinators," Soriano said.