Gripping a Starbucks cappuccino in one hand I rode the creaky elevator up to the sixth floor of Brotman hospital. It was back in the mid nineties and I was on my way to the local detox center where I had been working as a drug and alcohol counselor for a year. My qualifications for the job came from my own intensive research with mind-altering substances. However, finally sober, it felt as if all the stars had aligned and I knew what I was put on earth to do. Change the world, one addict at a time.

As the doors opened and I got off the elevator someone else might of thought I had entered a scene from "The Walking Dead' but not me. These were my brothers and my sisters. The ones whose lives had been downsized to a pill, a crack pipe or a bottle of Jack Daniels. The ones who threw up the lining of their stomach, coming up for breath, only, to swear they would never drink again.

The first person I laid my eyes on that morning was Taylor, who in his early twenties was just one of our many frequent fliers. He was dragging an IV pole down the hall, the corners of his hospital gown flapping while his Calvin Klein tighty-whities hung out there for everyone to see. Smiling, I just shook my head... yup, these were my peeps all right.

After checking in with the charge nurse, I grabbed a couple oversized vinyl charts and headed for the office that I shared with the other counselor, Joe. Sitting down, I dove into my paperwork and with my reading glasses on, I appeared more like a medical doctor, than the ex junkie that I actually was.

"Buenos Dias," Joe said, as he swaggered in.

"Well, I guess I haven't transcended humanity like you have Wendy," he replied.

Thrusting my middle finger in his direction, he started to laugh.

Joe, a Hispanic, ex-punk rocker with arms covered in a web-work of intricate tattoos that extended from his wrist to his neck. We were two sober soldiers on the front lines. Joe and I witnessed things most people don't see in their entire lives. A lot of our patients wouldn't make it. In fact, we averaged about one death a month and those were just the clients that we knew about. There were the others who went MIA and when addicts go missing it's usually not a good thing.

By ten o'clock it was time for morning process group and within minutes all the seats in the circle were full. Joe settled in on one side and I sat across from him.

"Okay, you guys it's check in time! Please give one word that best describes how you feel?" I said, nodding to the stringy haired girl with trashy clothes on my left.

As she stared at the ceiling contemplating her current emotional temperature, I could tell she was a tweeker, a term used for meth heads for their unique ability to stay awake for 'two weeks' straight.

Suddenly, the door flung open and everyone turned to watch as a young pixie-looking girl, with delicate features came in late. It took her a moment but after she found a seat I resumed the group.

"Annoyed," the tweeker replied, slumping down in her chair.

Using my active listening skills, I nodded my head before moving on to the next patient. When it came around to Pixie's she whispered softly, 'I'm scared.' Having struck a cord, everyone in the group nodded.

When we had gone around the entire circle, I opened it up for anyone who had a burning desire to share.

After an hour, group was over and the patients headed outside for a cigarette break while I asked to meet with Pixie.

"I'm going to be your counselor while you are here," I told her, as she sat down at my desk. She shrugged staring blankly at the floor.

"What are you kicking?"

Klonopin, a sedative that is prescribed for anxiety can sometimes cause side effects such as blinding head aches, confusion, hallucinations, increased panic, and thoughts of harming oneself... just to name a few. 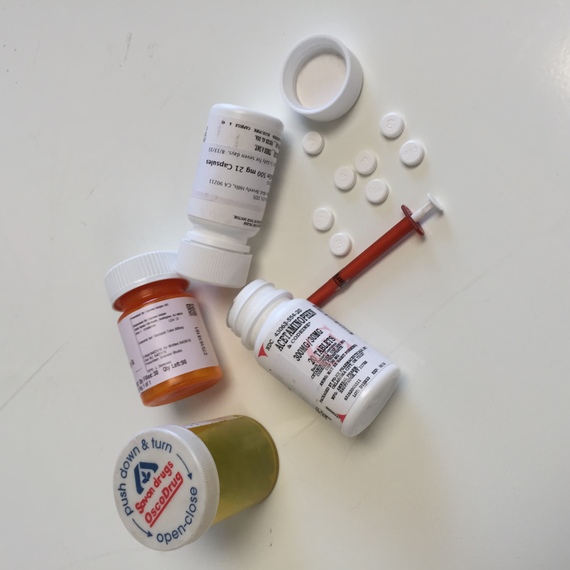 "Yeah, that's how I felt alright."

"You were on them?" she asked, her brow creased like a paper fan.

Not wanting to discourage her, I didn't tell her that while kicking cold turkey in jail, my joints seized up like unoiled pistons and my flesh crawled with the sensation of a thousand invisible bugs. I also didn't mention the seizures or how I was eventually rushed to the hospital in an ambulance to be revived. Instead I calmly said, it wasn't easy but I'm grateful to be on the other side.

She studied me for a moment, her mind working behind her eyes. She wanted to believe me. I could tell.

Unfortunately, within days Pixie was in the throes of one of the worst detoxes I had ever seen. Each morning when I got off the elevator Pixie would be they're waiting for me, her skin glistening with sweat.

"I can't do this anymore," she whined.

For Pixie, it wasn't one day at a time. It was an hour, a minute, and a second at a time. "Maybe I should just stay on the klonopin?"

"They weren't working for you anymore remember Sweetie?"

Every day for the next few weeks Pixie paced the long hallway like a feral cat. Periodically she'd peek into my office and if I was free she'd come in and sit down, looking up from her incredibly sad almond eyes.

I knew down in the marrow of my bones what that felt like. And although at times I wanted to forget, I knew it was the broken places in me that could help her.

She paused and let out a long sigh.

"You're the only one who knows what this is like." Pause

Pixie pierced through my internal boundaries and wormed her way right into my heart. After six grueling weeks of what I can only equate with torture, she was finally off those fucking pills. I couldn't have been more proud of her if she were my own daughter graduating college with honors. Before her release date I sat down with her once again.

"You need to go somewhere to get stronger."

Without giving me any fight Pixie agreed and I was able to call around and find her a respected, long-term treatment center near by.

On her discharge day she came into my office, dressed in Levis and a pale blue hoodie.

"I just wanted to say good-bye," she said, with a quivering smile. "You know I couldn't of done it without you."

"Just do me a favor girl and don't do any more pills again?"

"No, never again," she said, shaking her head fiercely.

"Can I call you when I need to do a feeling check in?"

When we hugged a golf ball size lump formed in the back of my throat. I swallowed it down hard and waved as Pixie rolled her suitcase behind her, leaving my office for the last time.

Several months later I was buried in my paperwork when Joe came to my desk with a somber look on his face.

"What's wrong?" I asked, leaning back.

"I just got a call from Pixie's treatment center. She took a handful of pills when her father was flying in for a visit and collapsed at the airport. She died on the way to the hospital."

My stomach coiled in on itself. Pixie had gone through hell, I just assumed she would be one of the ones that would go on to make it.

Sober, it felt as if the tectonic plates shifted and shot me deep into a dark abyss. I rushed to the bathroom, where tears felt like they were being pulled out of my sockets by the fistfuls. Without my usual shock absorbers, like alcohol or narcotics to buffer myself from the hard edges of life, I felt everything.

I never did find out why Pixie committed suicide but what I did learn was while I may be able to carry the message, no matter how hard I try, I will never be able to carry the addict. For me, getting sober was the hardest thing I've ever done. It was like going through the eye of the needle.

For all of us that do make it to the other side, it always has and will always remain...
an inside job.

*all names have been changed