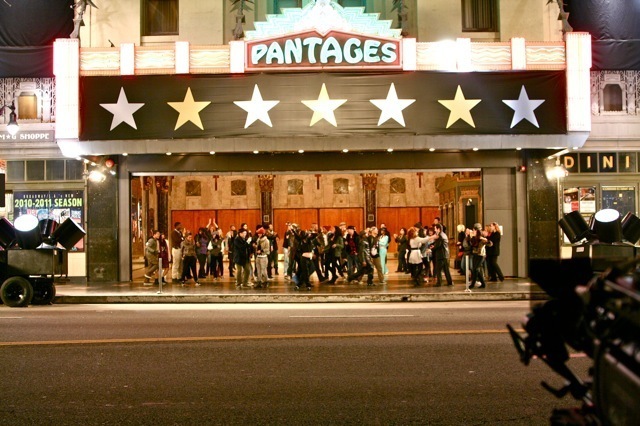 Picture courtesy of the Estate of Michael Jackson

Michael Jackson was so impressed with dancer, Sofia Boutella -- star of the late icon's new music video for "Hollywood Tonight" -- he was ready to offer her the opportunity of a lifetime: the chance to dance alongside him on his This Is It concert series at the O2 Arena in London. Unfortunately, she was still under contract for Madonna's Confessions Tour at the time and couldn't get out of it. Seeing how disappointed Boutella was, Jackson turned to a couple of his collaborators and said: "I used to date Madonna. I should call her."

While Boutella ultimately missed out on This Is It, she pays admirable homage to the King of Pop in his most recent posthumous video, which paints the story of a young, ambitious girl trying to make it in Hollywood without being swallowed by its trappings and illusions. It's a well-worn tale, but is carried out tastefully by director, Wayne Isham, and sparked by the infectious energy and talent of Boutella. The video also reminds -- along with recent MJ tributes on American Idol and Glee -- how profound Jackson's influence continues to be on new generations (many of whom only "discovered" him after his tragic death in 2009).

"Hollywood Tonight" is the second single to be released from Jackson's posthumous album, MICHAEL ("Behind the Mask" is the alternate single for several countries, including the United States).

The song has a long and winding history. Jackson first put down a sketch of the lyrics in 1999 while staying at the Beverly Hills Hotel. Soon after, he began working out the music with longtime friend and collaborator, Brad Buxer (who co-wrote the song). The song traveled with them from Los Angeles to New York, Miami to Neverland, during the early Invincible sessions. Jackson and Buxer were pumping out some outstanding material around this time, including songs like "Beautiful Girl," "The Way You Love Me," "Speechless," "The Lost Children," "Shut Up and Dance" (a great dance track Jackson and Buxer worked on with Michael Prince and Eric Kirkland with echoes of Stevie Wonder and MJ circa Bad which, unfortunately, doesn't have complete vocals) and "I Was the Loser" (a nice, melodic mid-tempo tune about lost love that is mostly finished), among others. A couple of years earlier Jackson and Buxer had also worked on artistic standouts like "Morphine" and "In the Back."

Jackson loved parts of "Hollywood" -- the opening Gregorian chant (his idea), the "westbound, greyhound" harmonies, the whistling in the outro -- but stopped working on it once producer Rodney Jerkins came on board for Invincible.

Over the next ten years, however, he returned to the track numerous times. For the bass line, he was searching for something similar to "Billie Jean," but distinct. "Do smooth muted bass on 'Hollywood,'" he indicated in one note. His early demos feature two layered bass lines (Michael Prince added the "Billie Jean"-esque kick and snare in the last mix MJ requested). Jackson and Brad Buxer continued tinkering with it in Las Vegas in 2007. For a while, he liked the idea of ending with the sound of a bus leaving or arriving. Yet he ultimately decided to conclude with the whistling, since the juxtaposition was a bit awkward.

In October 2008, Jackson, now living in Los Angeles, asked recording engineer Michael Prince to put the latest mix of "Hollywood" on CD so he could listen to it and see what might be improved. Sadly, he never got around to working on it again.

The new single of "Hollywood" is truer to this last version than the album cut. Of course, Jackson had intended to keep working on it, which is why his estate and Sony originally brought in two of Jackson's close collaborators, Theron Feemster (aka Neff-U) and Teddy Riley, to try to finish it. Feemster had the first crack and came up with some solid mixes; yet Sony didn't feel it was quite right and subsequently gave Teddy Riley a shot. Riley's production, which retained much of Michael and Brad's demo (including the intro and outro) and elements of Feemster's mix (including the fantastically funky guitar riff), became the album version.

After it was released, however, many fans voiced concerns about a) the over-processed vocals, and b) the lengthy spoken bridge. Jackson had, in fact, written lyrics for his own bridge, which were much darker than Riley's. Jackson's bridge reads:

While Jackson's version highlights the tragedy and uncertainty of a dream deferred, Teddy Riley's bridge opted for a more positive and tidy resolution. "With the bridge we kind of made her succeed," Riley explained. "[She] completed her mission."

Riley would have undoubtedly used Jackson's version had their been vocals for it. Unfortunately, they were never recorded. With the new single, however, Sony decided to cut the spoken part completely and showcase instead some of the heightening drama and tension Jackson intended for this section. They used his beatboxing, his idea of swelling horns and strings, and his operatic vocal (pulled from a tape left running during a recording session in a hotel room). In addition to the bridge, the vocals on the new single are left un-processed and the production is scaled back. The result is a single that has a rawer, funkier, but less finished feel than the album version.

"Hollywood Tonight," then, has gone through many incarnations: the several different demos Jackson recorded with Brad Buxer and Michael Prince, from 1999 to 2008; the two versions Theron Feemster worked on following Jackson's death (one of which is reportedly quite impressive); the polished album version completed by Teddy Riley; and, of course, the new single. All are necessarily approximations to what Jackson would have ultimately put out in finished form. That's the nature of posthumous releases. They will always be imperfect and they will always generate fierce debate.

But for most music lovers, we will take whatever new Michael Jackson we can get, whether demos, new mixes or remixes. "Hollywood Tonight" could be gathering dust in a vault; instead, it has people dancing in the streets.

Joseph Vogel is the author of the forthcoming Man in the Music: The Creative Life and Work of Michael Jackson (Sterling 2011).