The French street artist known as JR wants to display your face in Times Square next week. For his project "Inside Out New York City," he plans to install a photo booth truck in the bustling tourist trap, creating poster-sized self-portraits that will be pasted on the ground in Duffy Square.

JR's Times Square decorations are part of his global project, Inside Out, which he launched after he won the TEDPrize in March 2011. In his latest installation in Times Square the first set of black-and-white images -- snapped ahead of time in the roaming photo booth truck -- come from neighborhoods affected by Hurricane Sandy. Next week, anyone will be able to put their faces on the concrete.

"The subjects of JR’s work don’t serve his personal statement or message, but represent themselves," Neil Callender writes in Tokyo Arts Beat. "In his use of the photo booth and his readiness to let others make the images, JR renounces the idea of himself as artist. Instead he has become like a curator; and the world is his gallery."

On April 20, a documentary film about the artist's global project called "Inside Out: The People's Art Project" will appear in the Tribeca Film Festival. Snap your own photo in Times Square from April 22 - May 10.

Would you line up to say cheese? Let us know what you think of JR's ambitious project in the comments below.

PHOTO GALLERY
Inside Out
Download
Calling all HuffPost superfans!
Sign up for membership to become a founding member and help shape HuffPost's next chapter
Join HuffPost

Inside Out Project In New York City: Artist JR Decorates Times Square With Portraits (PHOTOS)
Inside Out 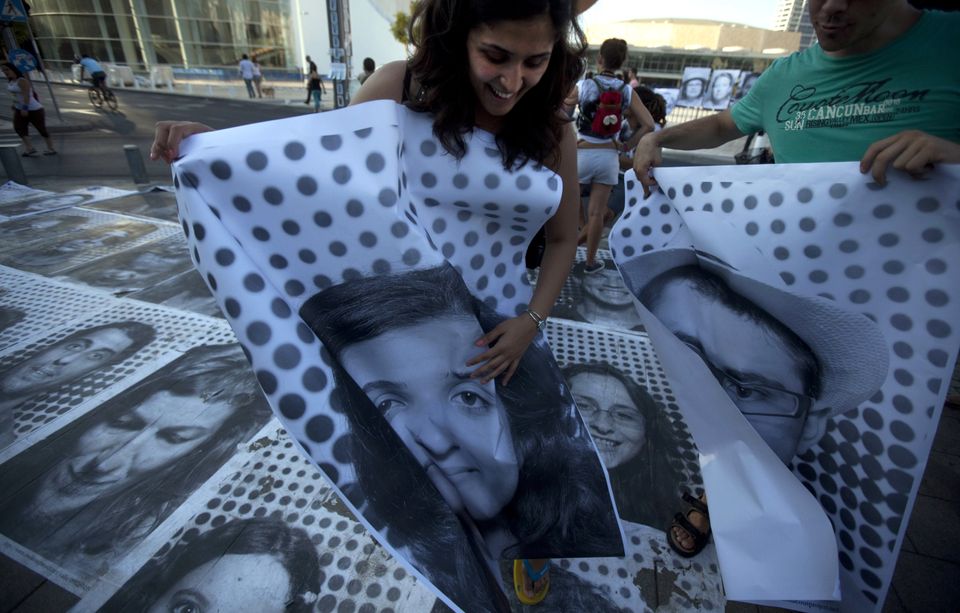 1 / 19
Israelis hold their pictures taken by French street artist JR in Tel Aviv at the site of a tent camp set up to protest against rising housing prices and social inequalities in Israel on September 3, 2011. (MENAHEM KAHANA/AFP/Getty Images)
Getty Images