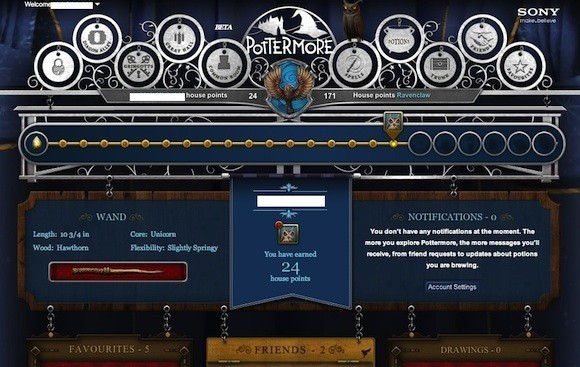 I was simultaneously excited and dismayed to receive an owl by email this morning. I'd been granted early access to Pottermore. I was excited because I was one of the first few thousand to get in. I was dismayed because I got the email thirty seconds before I was to head off to work.

To say I've been distracted today would be an understatement.

Pottermore truly is an exploration into the world of Harry Potter. Each chapter of each book has been rendered into Flash-based paintings that can be explored, zoomed into, and clicked on. Navigation bars above, below, and to the side lets you know what you can read about and explore and move through, taking you to pages and pages of backstory, behind the scenes information, and expanded encyclopedia-like entries of just about anything you could think of.

It's also something of a scavenger hunt. You must collect items ranging from Harry's alarm clock to the cupboard under the stairs to a vial of unicorn blood. Along the way you collect chocolate frog cards of various wizards through history, and books filled with spells and knowledge of the wizarding world.

To say that Pottermore is an immersive experience might be an understatement. The illustrations (at least for the first book) are better than what you saw in the movies. As soon as you get to Diagon Alley you're able to go shopping for your supplies (that you'll actually use) and then you must go buy your wand.

As I went through to choose my wand, I was asked a series of questions, written by Rowling herself, before a wand chose me.

I was assigned a Hawthorne wand with a unicorn core, 10 and 3/4's inches, and of a slightly springy flexibility. It was very cool and seemed very personalized, but you don't realize how personalized until the next screen where you're able to explore what all the different sorts of wand cores and woods mean. There's hundreds of possible combinations, thousands maybe, and somehow when I read about typical personality traits of wizards with my wand it seemed oddly accurate. Magic? Maybe.

Soon, you're brought to Hogwarts itself, learning bits of fascinating information all the way. (For instance, all the fractioned platforms of King's Cross station are in use for magical folk. Platform 7 1/2 is sort of like the Orient Express.)

And that's when the fun really starts. You're sorted into a house at Hogwarts through a series of questions. The questions don't seem to have obvious paths to any specific house but, again, the results seem oddly prescient. As I read the books, I was quite confident I'd be sorted into Ravenclaw and this only confirmed my suspicions.

From there, you're granted access to the common room of your house and the majority of social networking begins. You can link up to Facebook and find friends of your own inside Pottermore, assign them nicknames, comment on their activities, and give them gifts of the loot you've found throughout the book.

An interesting side note: It seems as though the sampling of users given access to Pottermore was quite small. My guess is they're slowly easing into the server load. In the Great Hall there are numbers for how many students there are enrolled in Hogwarts (meaning they made it all the way through the Sorting Hat) and as I write this, there are less than 3,600 people total. It seems as though getting in was extremely rare and I have no idea how quickly they'll be letting more people in.

The site still has a few problems, but that's to be expected in such an early beta. I had problems making potions and stirring ingredients, there seemed to be some glitches in the hidden content here and there, and there were spots of slow connectivity, but overall the experience is smooth and utterly absorbing.

I'll be honest, I'm not even the biggest Harry Potter fan and I found the whole experience completely riveting. It really has taken a significant chunk of my day.

My favorite behind the scenes tidbit? That Hermione Granger might have been known as Hermione Puckle. The behind the scenes stories are fascinating and offer an unparalleled look into J.K. Rowling's creative process. She even has cameos in short (20-30 seconds) videos introducing you to Pottermore and congratulating you for completing the first book.

Surprisingly, I didn't see any ads except for a modest Sony logo in the top right corner. Not too obtrusive and easily ignored.

I've been saying since day one that this is very smart move for J.K. Rowling to expand her saturation in the lives of fans (she might be growing into a capable rival for George Lucas and the world of Star Wars... but probably not). More than that, though, this is good for those of us writers who are relying more and more on digital publishing for income. This is going to turn a lot of readers into digital book consumers, and that's good news for everybody.

Bryan Young is the editor in chief of the geek news and review site Big Shiny Robot! and the author of Lost at the Con.