You've no doubt seen the cardboard box on TV, on the daily broadcasts coming out of the Philippines. Actually there are stacks and stacks of these boxes with the acronym "USAID." That's the U.S. Agency for International Development. Inside this box one will find tarps and tents, clean water and emergency food. But there's so much more inside than that. 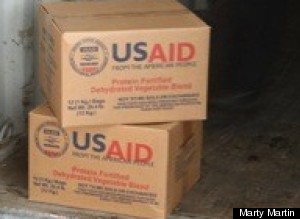 Inside that box is hope. Its presence means U.S. expertise and leadership will help lead the way to making healing possible in a country where bodies are rotting on the street; where 10,000 are feared dead, and 9 million are impacted by the worst typhoon in recorded history.

Something every American needs to know: When it comes to emergency response, and longer term efforts on behalf of child survival and disease reduction, U.S. foreign aid plays an indispensable role. As we witness devastation in the Philippines, we also see a commitment to help those in deep need. Which means around the globe, we also see unprecedented results. This year, 6 million fewer children will die before their fifth birthday than in 1990.

•Eradication programs: First small pox, next polio. Once the scourge that crippled 350,000 children a year until the global eradication program began in 1988, will strike fewer than 300 children this year. That's more than 10 million people walking today who would otherwise be paralyzed by polio.

•Fast-moving emergency procurement and coordination across continents -- what we're seeing in the Philippines right now.

Food for the Hungry is on the front lines and we see the impact of U.S. foreign aid in developing countries everyday, not just during emergency disasters: In the emaciated infant gaining weight, the child drinking safe water for the first time, the girl attending school. When it comes to hands-on delivery of services, the government looks to those who can meet needs efficiently and effectively, which is why USAID channels two-thirds of government foreign aid funding to American companies, NGOs, and faith-based organizations like ours -- we are all pivotal partners with decades of experience on the ground and the trust of communities.

We understand that we are in a time of fiscal austerity. Congress has already reduced the base foreign aid budget by 20 percent since 2010. Congressional budget debates are now underway. I ask each of you to consider this: It's not only that there will there be more devastating typhoons, tsunamis and earthquakes, but on any ordinary day 18,000 children die, not from these terrifying natural disasters, but mostly from preventable disease.

We are a blessed country. The private sector and our government must continue to respond to emergency and daily tragedies with all the resources we can spare, together with the rest of the world. Those USAID boxes that contain lifesaving supplies, and so much more, are part of the fabric of our American spirit and faith-based values.

Please ask Congress to increase, not decrease, that small portion of the budget targeted for poverty-focused health, development and humanitarian aid. And thank the bipartisan supporters in Congress who have long understood that this type of foreign aid is both a smart thing, and the right thing, to do. For all God's children.

Marty Martin graduated from the United States Air Force Academy and served as a rescue helicopter pilot in the U.S., Vietnam, and Greenland. Following the Air Force, he attended Covenant Theological Seminary and he received an honorary Doctor of Humanities degree from Colorado Christian University. Marty joined Food for the Hungry's staff in 2011 as Chief Operating Officer, one of four Global Executive Officers.