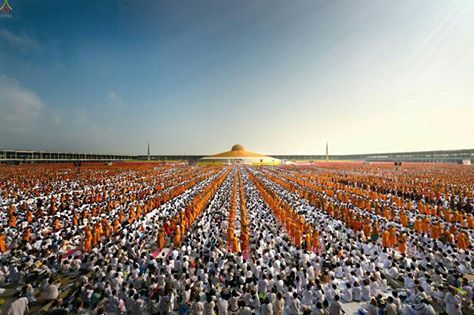 In a previous article, I wrote about my personal experiences at Wat Phra Dhammakaya, a massive but mysterious 1,000 acre temple in Thailand best known for its massive ceremonies and its iconic stupa. Many critics however, say that Dhammakaya owes its success to its "commercialization" of Buddhism.

So why is the world's largest Buddhist temple being called commercial? And just how accurate are these accusations?

A major criticism of Dhammakaya regarding its "commercialization" is in its references to wealth. This is a pretty valid accusation, since Dhammakaya does indeed make references to attaining wealth in its ceremonies and blessings.

However this criticism stems more from a misunderstanding than anything. Contrary to the popular stereotypes of Buddhism teaching detachment and giving up your possessions, Buddhism is about much more than abandoning your stuff.

While the Buddha did teach that letting go of all desire was the key to attaining enlightenment, keep in mind that many of these teachings were directed at monastics, who usually had the explicit goal of spiritual liberation. The Buddha was known for crafting unique sermons to fit whomever he was teaching and more often than not, when directing laypeople, his teachings were more about improving their lives than material abandonment.

Not to mention, wealth (as well as good health, long life, mental acuity, and a host of other things the Buddha himself discusses) is indeed a very useful thing to have while still trapped in the cycle of existence. And it's much easier to take up the holy life if you don't have to worry about having to support your family. 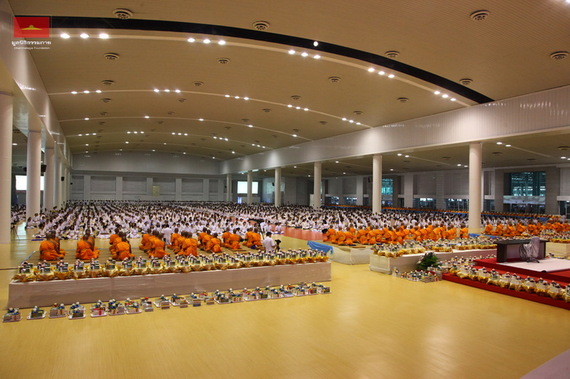 In fact, the Buddha himself, born a wealthy prince, made numerous points about the usefulness of wealth, and it'd be hard to believe Prince Siddhartha himself would've abandoned his wife and son for the holy life unless he knew they would've been taken care of. The Buddha has however said on many occasions that the holy life is far more beneficial than any amount of wealth or charity, something Dhammakaya has openly agreed with.

These details shouldn't be taken lightly; I have seen many misguided accusations against Dhammakaya in a variety of news outlets over the temple's references to wealth.

I remember one Western news outlet slam the temple for its "commercialism", unwittingly citing the fact that Dhammakaya includes references to wealth in its blessings. While it is true that the temple includes such references, that is something that is not unique to Dhammakaya, and can even be seen in Pali blessings in the Buddhist scriptures used by virtually every single temple in Thailand and in numerous Theravada temples abroad.

Another common accusation critics make against Dhammakaya is that the temple is extravagant, and unlike the previous allegation this accusation doesn't really have a strong basis in fact.

Dhammakaya's reputation as not just Thailand's largest temple, but also its richest temple is very well known among the public, and it's easy to perceive a wealthy organization as having luxurious accommodations. So it's not surprising people accuse the temple of being the Buddhist equivalent of a mega-church that preaches the prosperity gospel. 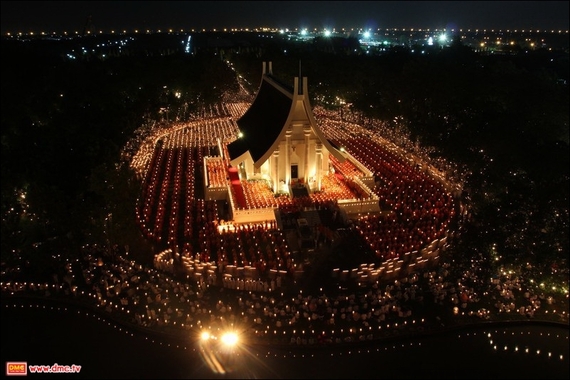 Although the temple uses most of its money for very specific purposes according to donors wishes: such as the construction of specific buildings, or to support other temples in crisis zones, Dhammakaya is a massive target by the media over its alleged "wealth". Despite the fact that the temple is actually quite frugal for a temple its size.

Considering the size and scope of many of the projects the temple pursues, it makes sense the Buddhist juggernaut would actually try to make the most of every baht it receives.

Dhammakaya is known for its simplistic, low maintenance cost buildings, and monks are trained thoroughly to use its supplies as conservatively as possible. The temple's biggest splurge is probably the fact that it provides free meals twice day to anybody who comes. 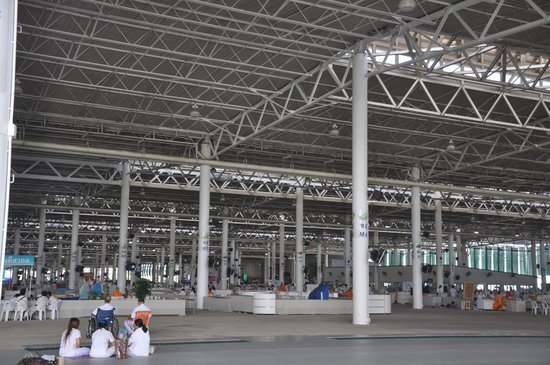 Having toured the temple myself on many occasions and having even lived there as a temporary monk a few times, I can say with full confidence that Dhammakaya is far from lavish.

The most lavish thing you would see at Dhammakaya is the temple having technology. Many critics point to the fact that some monks have laptops and smartphones proves the temple misuses its donations. Of course, these things are generally offered to the monks directly by faithful lay people. 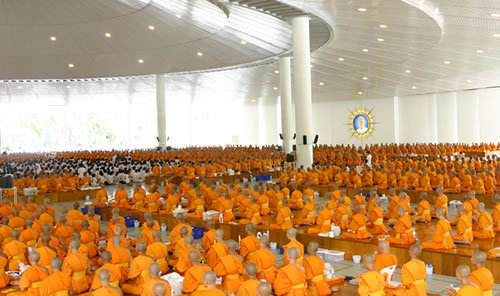 While Dhammakaya does have many monks with laptops and smartphones keep in mind these things are generally pretty useful in the modern world anyways, especially for monks that have to teach people regularly. Using modern technology is a pretty necessary way to communicate in such a gigantic temple, especially one with affiliates all over the world. And Internet connection serves as a great way to benefit the public with easy access to the Dhamma.

Not to mention, Dhammakaya is definitely not the only temple in Thailand to have monks with iPhones. In fact, monks having smartphones isn't even something limited to Thailand, something American comedian Conan O'Brien would attest to.

Contrary to the claims of random commenters on the Internet, all monks and staff at Dhammakaya live quite humble lifestyles, and anybody who visits their living quarters themselves won't see an inkling of extravagance. Even if you visit the dwelling of the temple's highly respected abbot, Venerable Dhammajayo, you would see a place of humility, thoroughly devoid of luxury. 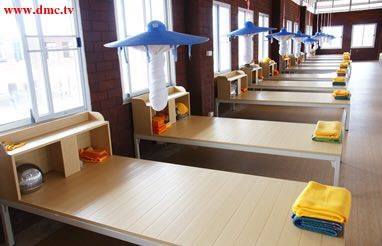 I myself lived in one of the temple's more luxurious living quarters as a temporary international monk, the picture above depicts something similar to the palace I lived in. Thai monks usually have a more austere accommodation.

Any salaried staffs are paid quite modestly, and no monk of any rank or background receives a single cent in income, although they are sometimes given petty cash or offered cash directly by laypeople to use for their convenience, a practice that is done throughout temples in all of Thailand by the way.

This is a pretty stark contrast to the mansions and multi-million dollar salaries you would see John Oliver assailing regarding America's mega-churches that critics say Dhammakaya is trying to mimic.

The most common and widespread criticism of Dhammakaya, is directed toward the temple's fundraising. The biggest argument for Dhammakaya's "commercializing" has to do with its emphasis on giving, a criticism that does actually have a strong basis in truth.

It's an interesting accusation considering that if you take a look at a lot of Dhammakaya teachings, it focuses heavily on meditation. In fact, they make regular references to meditation all throughout the temple, and staff would be much more excited over a newcomer coming to learn meditation than offering a donation. 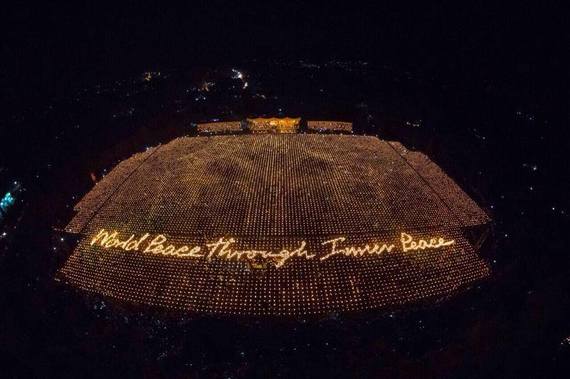 The temple even recommends that you spend one minute of each hour every day to step back and meditate, something they remind their members of regularly on their 24-hour Buddhist TV program. Dhammakaya also has its own (free just so you know) online program to encourage people to meditate consistently.

So are all of these fundraising accusations just hot air?

While Dhammakaya is highly meditation based, these claims of the temple emphasizing giving is far from unfounded. Dhammakaya is known for its unique approach to Buddhism, and critics and supporters alike recognize the temple for its efforts to align Buddhism to modern civilization. 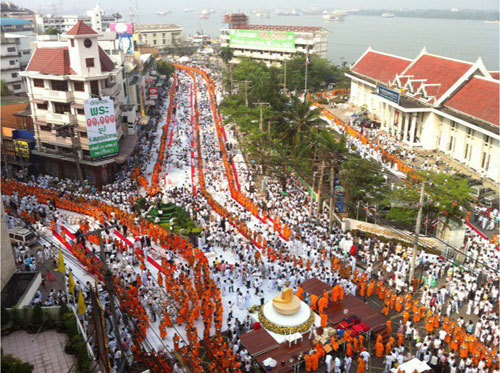 Dhammakaya denies having any doctrinal differences with Thai Buddhism, but they are known for a few differences in customs and for putting more emphasis on certain aspects of the Buddha's teachings.

One teaching of the Buddha that is emphasized by Dhammakaya especially is the making of merit through Dana, Sila, and Bhavana; or the practice of generosity, morality, and meditation. Although these teachings are directly from the Buddha himself, many critics say that Dhammakaya uses it as a guise for raising money. 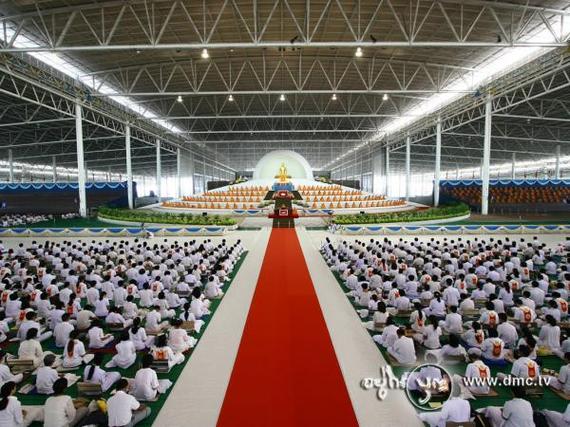 Contrary to the accusations of many critics, the temple has never claimed that giving to Dhammakaya is better than giving to any other temple; and claims about Dhammakaya "selling" Nirvana is only used as click bait or as a hook to sell books.

Dhammakaya even encourages its members to support and attend their local temple's events also, not just their own. And the temple routinely reminds its supporters that mindset and intention are just as important as the activity.

While Dhammakaya goers do naturally give more to Dhammakaya than to other temples, that is pretty much what one would expect anyways for an organization with such a devoted following, and Dhammakaya makes it very clear that the key to Nirvana is through meditation and only meditation. 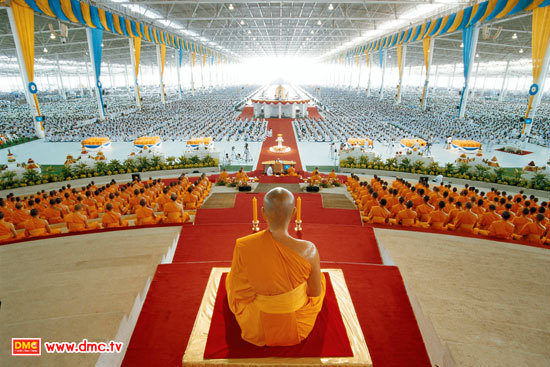 If you explore the temple yourself, you will find that all three of these things are indeed encouraged and practiced by attendees actively, especially meditation above all. At Dhammakaya sermons, they routinely say that in respect to those three concepts of Dana (giving), Sila (morality), and Bhavana (meditation); giving is important, morality is even more important, and meditation is the most important. 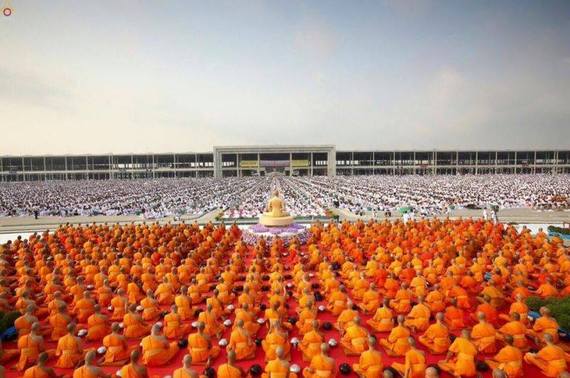 Despite the frequent reminders to center the mind and the lengthy mass meditations that make up the cornerstone of Dhammakaya events, you will hardly ever hear about such things outside of the temple's own network. And no matter what kind of scriptural justification or photographic proof from within the temple they can provide, Dhammakaya just can't seem to shake this "commercial temple" image it has lingering around it.

The fact of the matter is no matter what Dhammakaya does, critics and journalists alike will cherry pick details of the temple's activities to fit their own interests. Heck, how many of you would've clicked on this article if the title wasn't so scandalous?

Unfortunately for Dhammakaya, the media tends to affix itself on the Dana aspect of Dhammakaya's teachings rather than the Sila or Bhavana aspects. And the temple's famed "wealth" is an attractive target for critics and journalists alike. After all, a story about a mysterious, colossal Buddhist temple ten times the size of Vatican City that preaches commercialism; is just so much juicier than a story of a colossal, 1,000 acre temple that preaches sitting still.