Major players in Washington cheered the latest version of an energy bill, which tries to buy support with "something for almost everyone." But beleaguered consumers will get stuck with skyrocketing bills after others feast on new government benefits.

We can expect any new "green jobs" to be offset by a larger loss of existing jobs, possibly up to 3-million, depending on details of how the bill's cap-and-trade system is implemented to tax carbon dioxide emissions.

"Climate Plan Aims to Provide Something for Everyone," headlined Congress Daily about the re-worked legislation from Senators John Kerry (D, MA) and Joe Lieberman (D, CT). That same phrase was echoed by a multitude of media.

But the "something" for everyday Americans is higher utility bills--another hit for struggling families in a sour economy.

If the massive new bill stalls from its own complexity, Sen. Harry Reid says he'll pursue a simpler-but-still-costly backup plan: Dictating that an ever-increasing portion of electric power must be generated from sources other than fossil fuels--a so-called RES "renewable energy standard" which by itself could cost a million jobs as well as higher electric bills and income loss averaging $2,400 a year for a typical family . 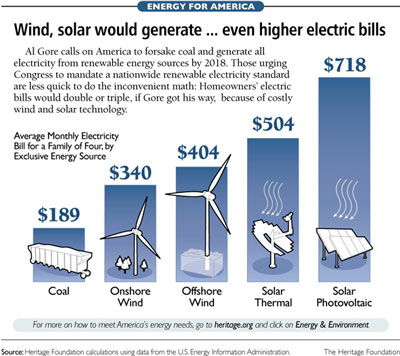 Just like the Kerry-Lieberman bill, the RES would force higher bills on unwilling and skeptical Americans, while favored businesses get billions in subsidies and incentives.

According to Rasmussen Reports, only 18% of voters are willing to pay even $300 a year for cleaner energy or to fight global warming . And 56% of all voters say they aren't willing to pay anything more at all in taxes and utility costs. (19% said they'd accept paying only $100 more a year.)

Consumers would pay as businesses passed along the new costs created by the bill. Many benefited groups gathered to attend and support the Kerry-Lieberman announcement, thanks to the potpourri of billions in federal subsidies, incentives and programs. The New York Times wrote, "The Kerry-Lieberman proposal . . . provid[es] something for every major energy interest -- loan guarantees for nuclear plant operators, incentives for use of natural gas in transportation, exemptions from emissions caps for heavy industry, free pollution permits for utilities and modest carbon dioxide limits for oil refiners." The Times identified the Edison Electric Institute, Nuclear Energy Institute, Duke Energy, and FPL Group as being there; stated that written statements of support were expected from oil giants British Petroleum, ConocoPhillips and Royal Dutch Shell; and reported that the bill had bought silence from the American Petroleum Institute and the U.S. Chamber of Commerce.

The Chamber's public response was timid: "We thank Senators Kerry and Lieberman, as well as Senator Graham, for their work to constructively engage the business community on these issues. The Kerry-Lieberman bill is a work in progress. Few in Congress or the business community have had a chance to review the entire bill."

For everyday Americans, the bill is nothing to cheer. Ben Lieberman, senior energy and environment policy analyst at The Heritage Foundation, told Talk Radio News Service that the APA amounts to nothing more than a giant energy tax. "The only way to reduce these greenhouse gas emissions from fossil fuels is to raise the cost of energy," he said. "They have to raise costs high enough so that people are forced to use less, that's how this works."

But according to handouts provided by Kerry and Lieberman, "roughly two-thirds of the revenues generated by the new law would be passed back to consumers through energy bill discounts or direct rebates". That sounds like a store that jacks up prices then offers a "discount" that still leaves a 33% price hike.

A major backer of the Tea Party movement, FreedomWorks, quickly condemned the measure as "the largest tax hike in history, and would hit the poor and middleclass, who spend a higher proportion of their income on essentials like electricity and fuel, the hardest."

They added, "Cap and trade will bring sky high energy prices for consumers and a new government slush fund for Washington. A twenty-seven cent "Fuels' Fee" on every gallon of gasoline included in the bill means not just higher prices at the pump, but higher prices on shipping and food production. Higher energy costs will put the cost of doing business through the roof and send American jobs overseas at a time of record unemployment."

As President Obama personally predicted, his own plan will make our electricity rates "skyrocket" as higher costs are passed on to consumers.