With our younger son off at college, my wife and I are empty-nesters again, and we've been cleaning and purging so we don't end up being old people featured on the TV show Hoarders.

On a recent Sunday morning, I was cleaning in the basement and came across a spiral notebook that my older son had used during his attempt at community college a few years back. It was pretty tattered, so I decided to put it in the "recycle" pile. But I decided to flip through it first to see if contained anything of any significance.

Most of the pages were blank. A few pages had some random doodles on them. There were also a couple of pages that had daily schedules written on them from my son's earliest stays in sober living houses.

Some of the pages, though, were oozing with negative emotion and made me cry both tears of sadness -- for the past they represented -- and tears of gratitude -- for where my son is today.

There were four pages that had the words "FUCK MY LIFE" scrawled in giant letters, letters so big they took up all 8.5" x 11" of the sheet of paper. But the thing that hit me the hardest -- and I mean it hit me like a Mike Tyson uppercut -- was a two-page note my son had written.

The note was dated 6/30/11, which was a little more than two months before my wife and I sent our son to Palm Springs, California, for treatment for his substance abuse. I will not share the entire letter here because it is much too dark and personal. But I will share this one small excerpt, only to give people an idea of what goes on inside a person's mind when they are suffering from addiction:

I feel dead inside. It's like nothing can make me feel better, and only drugs can block out all the bullshit, take my mind off of it for any period of time.

That paints a pretty clear picture of how an addicted person feels inside, doesn't it? They don't want to be addicted. They just want to feel better and block out the negative emotions. They want to clear their mind of the things that make them hurt. And self-medication is the only way they know how to do it.

About 10 weeks after my son wrote that note, my wife and I created a boundary and stuck to it. Our son could either go to rehab or move out of our house. It took a few days, but he chose to go to rehab.

Thank God he did.

When my wife got up that Sunday morning, I asked her, "Do you want to see something that will make you feel grateful today?" Then I showed her the note our son had written. She was overcome with emotion just like I was.

I thought about throwing the note away, but part of me said to keep it -- not so I can dwell on the past, but so I can have another reminder of how far we've come.

My son is 805 days clean and sober today. That's two years, two months, and 13 days. And I am grateful for every single one of them. 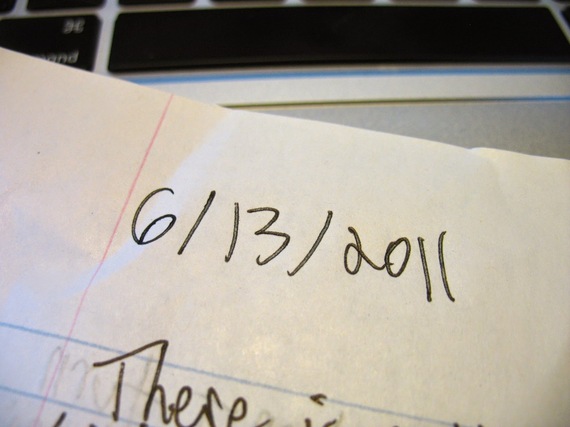 Have a story about depression or addiction that you'd like to share? Email strongertogether@huffingtonpost.com, or give us a call at (860) 348-3376, and you can record your story in your own words. Please be sure to include your name and phone number.

More:
healthy livingsobrietyParentssadnessemotions
Newsletter Sign Up
The essential guide to taking care of your mind and body
Subscribe to HuffPost’s wellness email
Successfully Subscribed!
Wellness delivered to your inbox