Researchers have new clues as to why it's so hard to concentrate after a bad night's sleep.

A new study published in the journal Sleep shows that even though people with insomnia and people without insomnia were able to perform equally on a working memory task, the brains of those with the condition did not work as efficiently.

Plus, insomniacs were unable to "turn off 'mind-wandering' brain regions irrelevant to the task," study researcher Sean P.A. Drummond, Ph.D., an associate professor in the department of psychiatry at University of California, San Diego, and the VA San Diego Healthcare System, said in a statement.

"Based on these results, it is not surprising that someone with insomnia would feel like they are working harder to do the same job as a healthy sleeper," Drummond added. 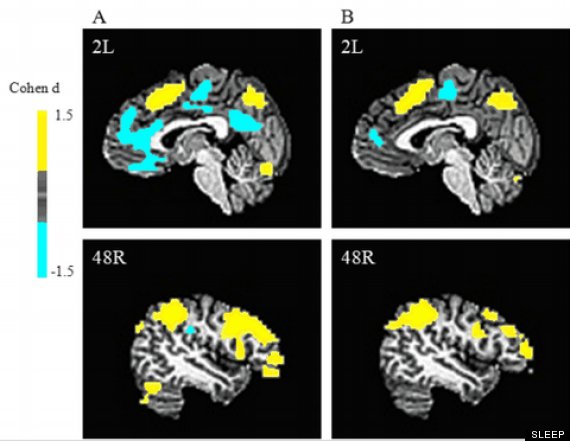 The study is based on data from 25 people with insomnia and 25 people who were good sleepers; the study participants' average age was 32. For the study, the participants did a working memory task while they were undergoing functional MRI brain scans.

"This study suggests PIs [primary insomniacs] have a reduced ability to engage some task-appropriate brain regions and reduced ability to modulate task-irrelevant (i.e., default mode) brain regions during working memory performance," researchers wrote in the study. "If either of our potential explanations for this is correct (PIs require greater attention and/or effort during baseline or PIs are unable to disengage from default mode during active conditions), these phenomena may be experienced by PIs as increased cognitive difficulties."

HuffPost blogger and sleep expert Michael Breus, Ph.D., previously pointed out that insomnia could also contribute to emotional problems and even depression. He noted a study from University of Pittsburgh School of Medicine researchers, which showed that insomniacs have dysfunctional activity in a brain region linked with emotion processing and regulation.

Sleep Deprivation Can...
More:
healthy living
Newsletter Sign Up
The essential guide to taking care of your mind and body
Subscribe to HuffPost’s wellness email
Successfully Subscribed!
Wellness delivered to your inbox