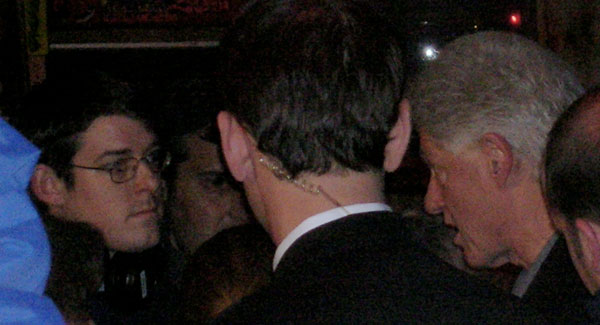 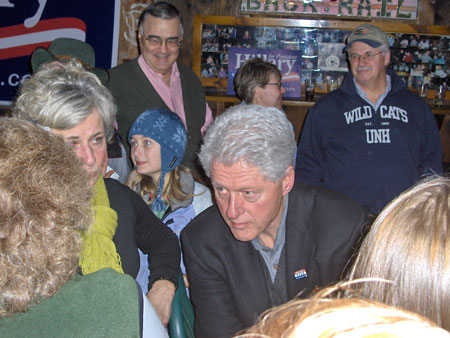 For a town with a population of 6000, there was a lot of political action in Plymouth, New Hampshire with only two days left before the presidential primary. Michelle Obama and Bill Clinton were not on the same stage, but while they shared equally eloquent deliveries, their messages were strikingly different.

Michelle Obama spoke to a crowd of over 100 supporters in the Obama Plymouth campaign headquarters telling both her personal story and Barack's. She spoke of holes in Americans' souls due to a deficit of empathy. The theme of the speech was similar to that her husband has trumpeting recently: overcoming fear and doubt of politics and the world today. Judging by the excitement she created on behalf of her husband, there was a desire to be inspired.

Clinton meanwhile spoke at the Lucky Dog bar two blocks away and stressed that his wife had been heavily vetted and mercilessly attacked for 15 years and took a few swipes at Obama. "You could vote for Obama on the theory that he is so new, no one has ever said anything bad about him," Clinton said. Of the Republican operatives, he said they would prefer fresh meat to someone who has the scars and you can't make them bleed anymore.

While Michelle Obama spoke for 35 minutes, Bill Clinton spoke for 10 minutes and then took questions for 30 minutes. One of the questions he fielded was "Is there anything that can be done to get the media to treat Hillary more fairly?" Clinton said there was only one period where they treated her unfairly which was the aftermath of Hillary's response to the drivers' licenses for undocumented workers. Obama, he said, had made the same gaffe two weeks later with zero repercussions. "If you want a president, you want Hillary. If you want a new story, you want someone else. We can't be a new story. I'm sorry. I can't make her younger, taller, male."

Bill Clinton showed what he did 16 years ago: He is a tough one to stump with a question and he loves New Hampshire. Even as the secret service lined up to escort him out of the place, he lingered to shake peoples' hands. He thanked someone who handed him something to autograph, as if they recognized his rock star status. I was told that he would not be taking questions and so when I shook his hand I told him that he was a little tough on the press, with bulbous headphones hanging around my neck, but that was okay. The smile disappeared from his face. He reiterated what he had said and then challenged me to prove that any of it was factually inaccurate referring to a story by Howard Kurtz of the Washington Post to back up what he had said. His gaze was penetrating and after witnessing his command on all facts, great and small, I decided not to go tit for tat with him. So I shifted gears. I asked him as one of the great orators of a generation what he thought about what his wife had said the night before, that words were not actions. He rightfully, I asked, understood the power and value of words. Clinton was three feet away from me when I asked the question and a foot away in an instant. One got the sense that he missed the true challenge of the campaign trail, the locking of horns and the verbal sparring-because I got an earful.

There was a time not so long ago when the world did not know Bill Clinton. I went looking for articles from the winter of '92 when a 45-year-old Clinton was preaching about change and the conviction of ideas. When his campaign was in trouble with the Gennifer Flowers incident, the Toronto Star reported he returned to "An emotional call for change, framing the election as a historic referendum on the nation's future." References to a '90s version of JFK were ubiquitous. There were references to the moving orator who could uplift an audience with stirring appeals to conscience.

Was it just the press at the time were moved by his passion, smarts and intelligence? Or is it like Michelle Obama said about her husband-that people desperately want to be inspired by something? 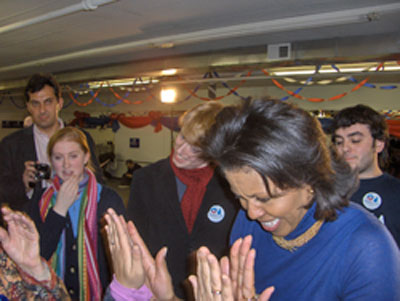