The I in CIO is about innovation and Kristin D. Russell, Secretary of Technology and Chief Information Officer of Colorado best exemplifies the power of innovation, and inspiration, to deliver meaningful value. Russell, who has run global IT for Sun Microsystems and Oracle, had no intention of working for the public sector, but when Governor Hickenlooper read her a poem in an effort to convince her to become the CIO for the state of Colorado, she reconsidered. The last line of the poem, by Marge Piercy which reads, "The pitcher cries for water to carry and a person for work that is real," inspired Russell to accept the CIO position and the responsibility of leading meaningful transformation, aimed at delivering substantive value to the citizen of Colorado. 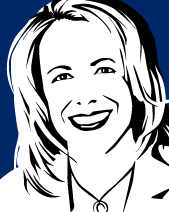 Colorado is one of the most innovative states in the nation with four of the top 10 entrepreneurial communities - a start-up happening every 72 hours - and the 3rd highest concentration of software developer talent. Denver is also the #1 city for 25-30 year old professional workers. Growing this innovation base in the state is half of Russell's role as the Secretary of Technology who claims that the public sector is the new emerging market. Russell shows us how CIOs of both public and private sector business can use technology to be more effective, efficient and more elegant in serving customers and grow innovation within their organization.

Bolstering innovation starts with change management. This seems to be a common starting point with the CIOs that I have interviewed recently, but change management in government takes on a whole new level of difficulty. According to Russell the government is not well-versed in enterprise IT and there is a risk-adverse culture in government IT. 30% of IT workers in the public sector will be eligible for retirement in the next two years; this mature workforce is trained in older technologies that are not used as much today. To help change the mind-set of her employees, Russell leads with the mind-set that anything worth doing is hard work.

When Russell was appointed as the new CIO she recognized that there were 15 different email systems among the 22 agencies being serviced by IT. There was no chat, no in-document collaboration, no Google hangouts and other collaboration technologies. In one day, the IT organization moved 30,000 Colorado employees to Google email. To help employees through these types of changes, Russell advises that CIOs (and any front line managers) recognize that their role is primarily about helping employees become more productive by leveraging the technology that is out there. It can't be just about the technology. Once employees are helped to realize that new technology can help them do their job faster and better they are apt to be more responsive to change.

IT execution velocity requires a cloud first strategy. Russell documented a cloud-first strategy with the mind-set that if there is not something on the shelf, they need to look at who they can partner with to build it. "I am very vendor agnostic in the state of CO, if something doesn't work for it we have the responsibility to go in a different direction," says Russell. They have a tech talk every month and regularly bring in new start-ups. In recognizing that the government has no business being in technology, she says cloud is a huge amplifier for the state of CO and a sweet spot opportunity. For any CIO, agility today must include a cloud computing strategy.

Control is an illusion - collaborate to co-create value. Russell has found the public sector to be much more collaborative than the private sector, where there is often a cultural aspect of not wanting to share. She says that in the public sector there is more of a sense that they are all in this boat together and they look at how they can help each other. Russell says that some of her best ideas and innovation have come from the conversations that she has across states and even countries. It is this collaboration that has helped her to approach challenges differently. She says there needs to be more of a leaning in on how we look at collaboration at different levels in an organization to seed out innovation.

Innovation opportunities are closest to the frontline. Russell believes that all businesses need to be more aggressive about getting to the frontline user and collaborating with them. Social has helped her to reach the citizens of Colorado and she has found that to be where some of the best innovation resides. By opening up data sets and asking people what information would be most helpful to them, they saw an over 200% increase in the number of data sets that have been shared. The number one data set turned out to be black bear sightings, something Russell's team could never have predicted without direct input from the citizens. "We are trying to make an intimate connection with the citizens of the nation by harnessing social and mobile to make government irrelevant in the sense that you don't have to go into a building anymore," said Russell.

Successful, timely modernization initiatives can follow the 80/20 rule. "The rip and replace approach of introducing innovation can be catastrophic for government," says Russell who believes that the government needs to look at getting things into more modern systems over time. Russell is working on implementing a new ERP system, which handles over 70 billion dollars of financial transactions per year. To inject innovation in this area and to help break the large budget and long project cycles that have become synonymous with government, Russell recommends that government procure talent from the private sector that is educated, well-versed and experienced in enterprise IT.

In a call out to the vendor community, Russell says the conversation needs to move away from the large system integrators and that vendors need to start looking at government and start building for the 80% and stop solving for the tail of the curve. "The problem with government is not that we don't have enough money, it's that we have too much money," says Russell. The government, as with any private business, needs to figure out how technology can be the foundation for becoming more effective, efficient and elegant in serving customers.

When IT leads, businesses succeed. For every one IT job there is an amplification of five new jobs. But what really foster's innovation? Data shows innovation is the product of strategy and structure, with company processes and culture to support it. As chair of the Colorado Innovation Network (COIN) Board of Advisors, Russell looks at how to connect the government to the business community to foster innovation across the state. In addition to COIN they identified that there are seven industries that are fueling Colorado's economy. In the spirit of using innovation to spur the economy, the State of CO provides grants to help these industries grow and to incent and ignite the entrepreneurial community across the state. With the desire to uphold the original intention of government as stated by our founding fathers, the State of CO looks for ways to increase the ability for businesses to start up and then to get out of the way. The State of Colorado also foster's innovation by working closely with colleges and universities to help collect convene and collaborate across the university research centers to do tech transfers and to make sure there is an industry to support them.

In closing, Russell says, "We all have to look at government in a different way and use innovation to be that nation that we once were so that we can create a situation where we rise the tide of the U.S. so that all boats come with us." This is an absolutely refreshing view of government from an extraordinary thought leader. So, who's moving to Colorado with me?

You can watch the full interview with Kristin Russell here. Please join me and Michael Krigsman every Friday at 3PM ET as we host CXOTalk - connecting with thought leaders and innovative executives who are pushing the boundaries within their companies and their fields.