Cancer can be one of the most devastating diagnoses, and it takes a special kind of courage to channel grief into something meaningful.

And that's exactly the case for the cancer patients highlighted in the stories below. Read about one young woman who rocked a "chemo mohawk," and another who turned her double mastectomy into a canvas.

Though some of the following stories feature people who left us too soon, they all inspire us in their own unique ways.

Your Ride Is Here is a Texas-based organization that matches cancer patients who need rides to and from the hospital with volunteers willing to drive. But their premium program Dream Ride, lets patients get from Point A to Point B in style. Local auto dealers -- Aston Martin, Bentley, Lotus and others -- help make it a reality. 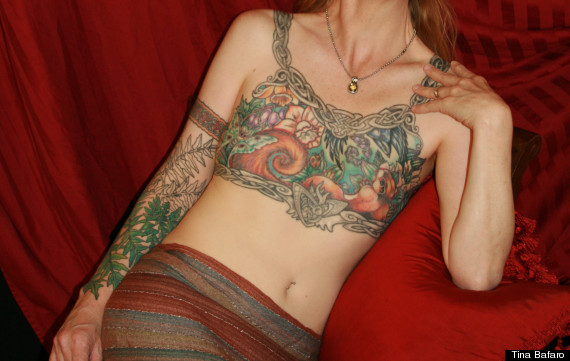 It took Inga Duncan Thornell, a Seattle life coach, one appointment per month with tattoo artist Tina Bafaro for over two and a half years to complete the piece. Since then, it's spread like wildfire around the Internet.

Reddit user Caldorbeb posted this image back in November with the caption, "Even with cancer one can pull off a great costume!"

Reddit user AsaMartin says he made this post two weeks after his leg was amputated due to bone cancer.

Talia Castellano gained Internet and real-world fame through her YouTube makeup tutorial series and chipper attitude, despite battling two forms of aggressive cancer. In one video, she explained how makeup gave her confidence.

"I love ... using it as my wig and having so much self-confidence to go out to the grocery store without a [real] wig."

Reddit user LegitimateSnape posted this snapshot of her New Orleanian aunt, with the caption, "You can't keep this Louisiana girl out of the kitchen!"

Looks like the eyebrows grew back, but we think it's still adorable.

Her self-dubbed "chemo mohawk" is glorious. 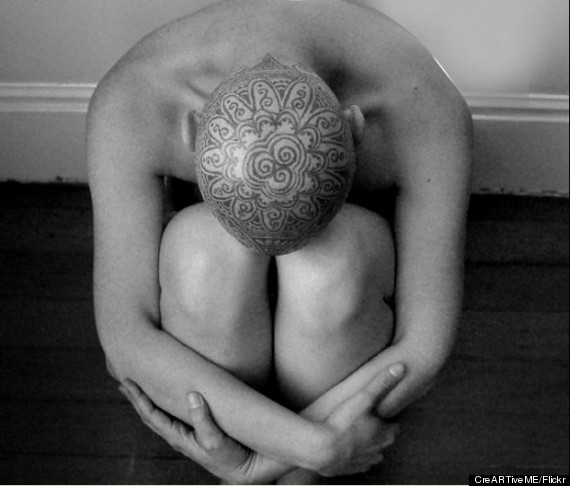 Some patients are opting to have their heads temporarily tattooed with intricate designs using the plant-based dye henna, which fades after a couple weeks. 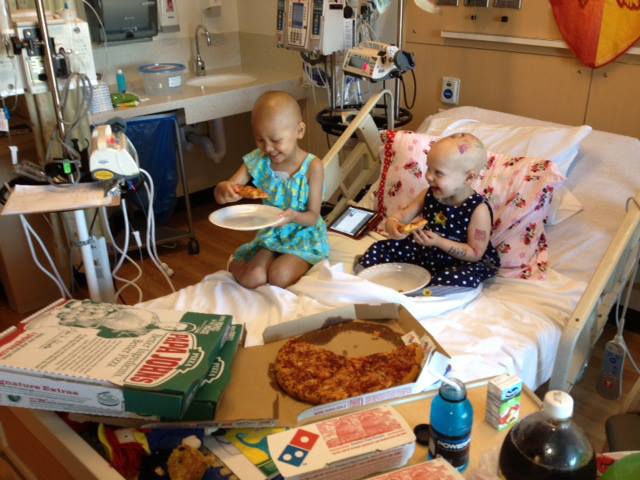 Last summer, at the request of her two-year-old daughter Hazel, Laura Hammersley used tape to form the words "Send Pizza Room 4112" on the window of the girl's hospital room. After a Reddit user posted this picture to the site, so many pizza deliveries started pouring in, the hospital had to ask all the do-gooders to (please) stop.

With help from their parents and the staff at the Johns Hopkins Kimmel Cancer Center's Division of Pediatric Oncology.

Ellie Jeffrey, former reporter for Britain's ITN and Sky News networks, kept a positive outlook on her blog "Written Off," (tagline: "making the big C smaller") despite being diagnosed with breast cancer in her 20s and given just months to live. After determinedly contacting specialists to explore alternative treatment options, she settled on a plan that gave her more hope.

"Still think I can make it past a year?" she wrote. "Because I do, I’m sure of it. ... They may not have told us what we wanted to hear, but what could we do to fix it?" After Jeffrey's death, her fiancé helped found the Eleanor Rose Foundation to help match other cancer patients with doctors and services by location and specialty.

Rhonda Julian credits daughter Jada for detecting her breast cancer after the six-year-old accidentally elbowed her mom in the chest and found a lump. Going through treatment, Julian snapped a few selfies that ended up going viral.

"You can’t beat the likes of a hospital bathroom with all the fixins," she wrote on her blog. "Now you see I’m okay. Walking around, goofin’ and everything." Julian now runs The Paint Her Pink Foundation, promoting breast cancer awareness.

Please do not mind that my eyebrows look different (ones falling out more than the other) but hello !!! SELFIE :)) pic.twitter.com/mScE0NV3kU

Known only as Emma on Twitter, she's got nearly 14,000 followers.

...to show off some badass dance moves in front of her surgical team. Deborah Cohen, Ob/Gyn and Beyoncé fan, rocked out to "Get Me Bodied" for six whole minutes.

my mom has her 4th and FINAL chemo treatment on monday. lets pray that the cancer will be all gone.💜 pic.twitter.com/ZhhsJvUcGl

Jan is a cancer survivor, has all her hair now. Luv this pic a tribute to pple still on the journey! #WorldCancerDay pic.twitter.com/tIMosnPhyv

Louise Page was diagnosed with a rare bone cancer in 2004 that eventually resulted in four amputation procedures on her left leg. (Before the first procedure in 2008, she threw her problematic appendage a going away party.) Page kept a blog, where she kept an optimistic view of her struggles and triumphs, to help her cope with her disease until her death in May 2013.

"Believe it or not, there are great days too. I had loads of laughs on the cancer ward with the nurses and the other patients," she wrote. "I have cancer, but I am still living my life."

The video's creator, Woody Roseland, is a seven-time cancer survivor, motivational speaker, and comedian who likes to sometimes ride his bike to chemotherapy.