Getting more likes on social media makes you happier. Science says so. And since we want you to feel happy, dear reader, we decided to figure out exactly how one goes about obtaining likes and followers on that most enigmatic of apps -- Instagram.

Instagram itself has been tight-lipped about what gets users to hit "Like," so we turned to the next most logical source: superstar Instagrammers with heaps of followers. It turns out that while becoming Insta-famous isn't exactly a walk in the park with an "Earlybird" filter, it's not impossible, either.

So let's introduce our panel of Insta-experts, who will help you become the toast of the Internet in no time.

Courtney Dasher, aka @tunameltsmyheart: Dasher, a resident of Los Angeles, owns Tuna, an adorable chiweenie dog with an occasionally prominent overbite. Tuna has amassed more than 850,000 Instagram followers since Dasher created the account in November 2011. He also has his own T-shirt line.

Pei Ketron, aka @pketron: A traveling freelance photographer who's accumulated more than 800,000 followers since she created her account in October 2010, when Instagram first launched. She has also been featured as one of Instagram's suggested users.

Samantha Lee, aka @leesamantha: A Malaysia-based mother of two who creates whimsical designs out of food. Her following is nearly 600,000 strong since she created her account in late 2011.

Kat Irlin, aka @kat_in_nyc: A New York-based photographer who has gathered more than 350,000 followers since creating her account in mid-2011.

Really successful Instagram accounts tend to stick to a theme: a designer who posts behind-the-scenes peeks into the fashion industry; a food artist who does amazing things with rice and string beans; a world traveler with a flurry of snapshots from Paris, Portugal and Peru; a crafty celeb obsessive; and, of course, an abundance of adorable puppies and kittens. 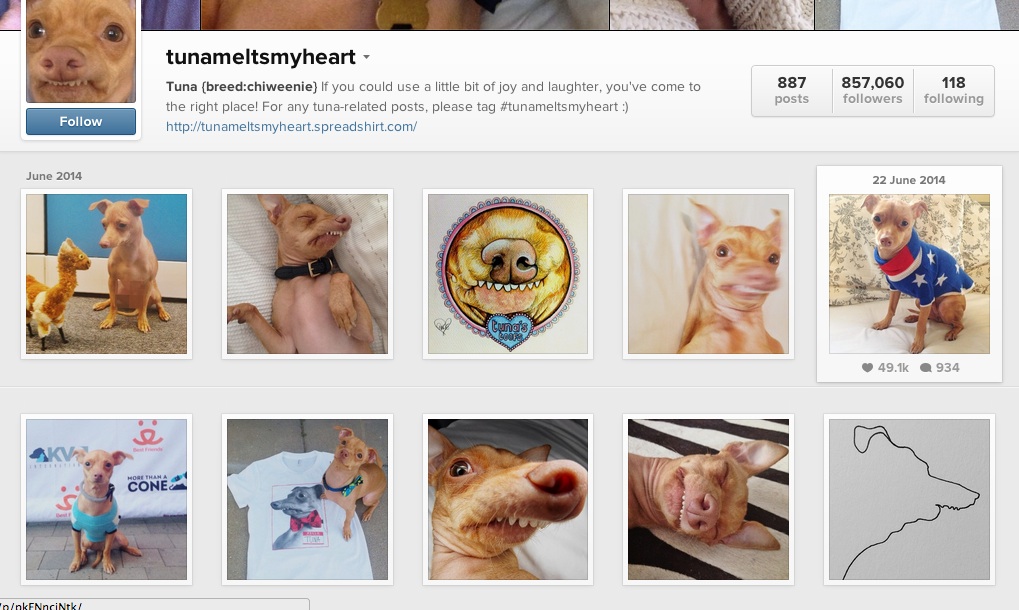 This is Tuna, Dasher's tiny chiweenie. With more than 850,000 followers, he's a bona fide Instagram superstar. Dasher has even taken him on a "Tuna Tour" of the Southeastern United States so that his fans could meet the pooch in person.

Dasher posts a new picture of Tuna every day, making sure to vary the photos with a mix of tried-and-true classics (Tuna sleeping, Tuna with his teeth sticking out) as well as a few more artful shots (Tuna posing in an American flag sweater, Tuna swaddled in a hipster scarf). She also includes the occasional Tuna fan art. The account is a perfect example of a well-executed theme with a super-consistent posting schedule (see below).

TIP NO. 2: STICK TO A SCHEDULE

It's very important that your followers know when to expect a new picture. "If you're going to be daily, you have to post daily," Dasher told The Huffington Post. "Your audience will expect that rhythm."

Lee also sticks to a daily schedule. "If I update my account once a week or too many at a time then disappear for weeks, it is unlikely that I can build a loyal following," she told HuffPost in an email.

If people are coming to your account for photos of your frowny-faced kitten, you probably don't want to throw in a picture of your morning soy latte. But giving the people what they want doesn't have to mean posting the same photos of sunsets and cityscapes over and over and over.

"The worst thing for me is to look at my own feed and be bored," said Ketron. "I know what type of photo is going to get more likes, but I still do my best to make posts that I want to see and share. I like symmetry, I like lines, I like buildings. But it's not like I don't shoot landscapes or portraits as well."

It's easy for a themed Instagram account to grow repetitive, but being a travel photographer means that Ketron always has something new and different to share -- and that's what an audience wants. Even Dasher mixes up her Tuna feed with a few fan art photos.

TIP NO. 4: USE INTERESTING HASHTAGS...

Hashtags are seen as the ultimate way to get more eyeballs on your post, but they don't necessarily keep people coming back for more. Our Instagram experts tend to eschew common hashtags like #dog or #love, because, as Ketron pointed out, "If I'm going to post a photo of a bike, why would I hashtag it #bicycle? There are literally millions of photos with that hashtag."

Instead, they tend to stick with a handful of unique hashtags that speak to the theme of the account or of a particular project. For instance, Ketron used the hashtag #leanwithit for this photo:

Lee told HuffPost that "hashtags are a great way to reach out to strangers who don't know about my Instagram feed," but she added that the tags should be relevant to the post. "I don't believe in using too many hashtags as it gives an impression that you are desperate for likes," she said.

Lee invented a simple bespoke hashtag for her creations, #leesamantha, and she usually adds another descriptive tag like #foodart. 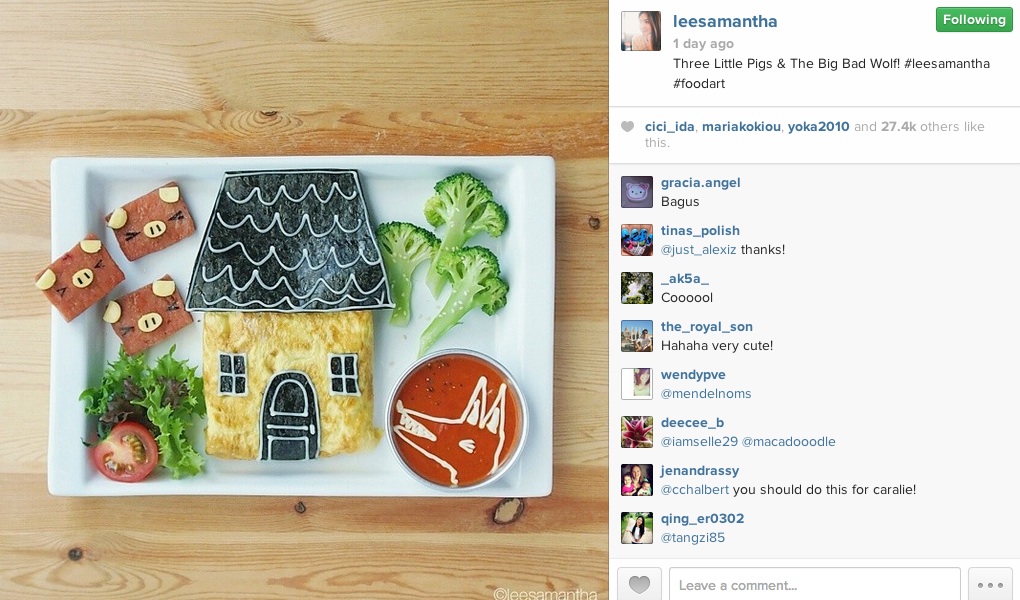 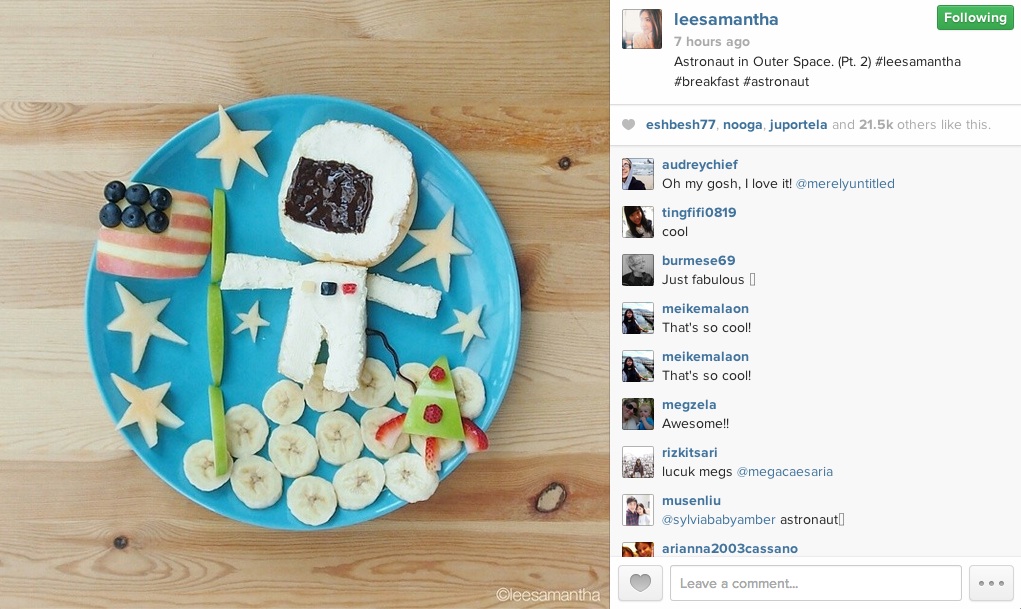 It's a point that Dasher endorses, too. "As an audience member, I find [hashtags] a little cluttery," she said. "If I see that, I feel like you're trying too hard to build your audience." That's why she sticks to one or two labels that really define the photo, rather than going for large quantities of generic tags.

TIP NO. 6: INTERACT WITH YOUR AUDIENCE

Even if you're not a slave to the almighty "like," you should take care to acknowledge your audience in some way. "I'm intentional about responding [to commenters], even though I'm not able to respond to everybody," Dasher said. "I want them to know that I appreciate them."

There's a reason professional photographers tend to have such sizable Instagram followings: They know what makes a good photo. "I shoot [a mobile photo] as carefully as I would a DSLR shot," Ketron said.

You don't need to be a pro to master a few photo basics. A lot of what makes a good snap is just intuitive. Is your subject in focus? Do the colors contrast in an interesting way? Are there any particularly enticing angles? Are you photographing something that people will actually want to see? Take a quick online photography tutorial if you really want to hone your skills.

TIP NO. 8: EDIT YOUR IMAGES

You should also invest in a good photo editing app, instead of resorting to Instagram's limited filters and editing tools. Dasher says her go-to app is Afterlight. Irlin prefers VSCO CAM and Snapseed.

No good Instagram account exists in a vacuum. Most accounts that see a surge in followers have been featured in one of three places: the app's blog, its Explore page, or, if they're very lucky, its suggested user list, which shows up under "Find People to Follow" in Instagram's settings.

Ketron had a leg up on other users by virtue of being an early Instagram adopter. "I knew people who worked at Instagram, and I was pretty well embedded into the Instagram community in San Francisco, so they wrote a blog post about me," she said. "Then they added me to the suggested user list."

But for those not fortunate enough to know the folks at Instagram personally, there is such a thing as organic follower growth. For Dasher, Tuna's inherent cuteness and adorable overbite made him destined to go viral. Mashable wrote about the charming chiweenie after Dasher uploaded a video of the pup trying (and spectacularly failing) to walk in doggy shoes, and a slew of media outlets followed. Then he was adapted into a meme on Reddit. Instagram promptly took note and featured Tuna in three separate posts on its personal page, growing his following substantially. By the end of 2013, Tuna had well over 500,000 followers.

Hubspot social media scientist Dan Zarrella did a little digging into the data of what makes a selfie go viral, besides a gorgeous face, of course. Looking at more than 160,000 images tagged #selfie, Zarrella noted a few surprising trends on his blog: 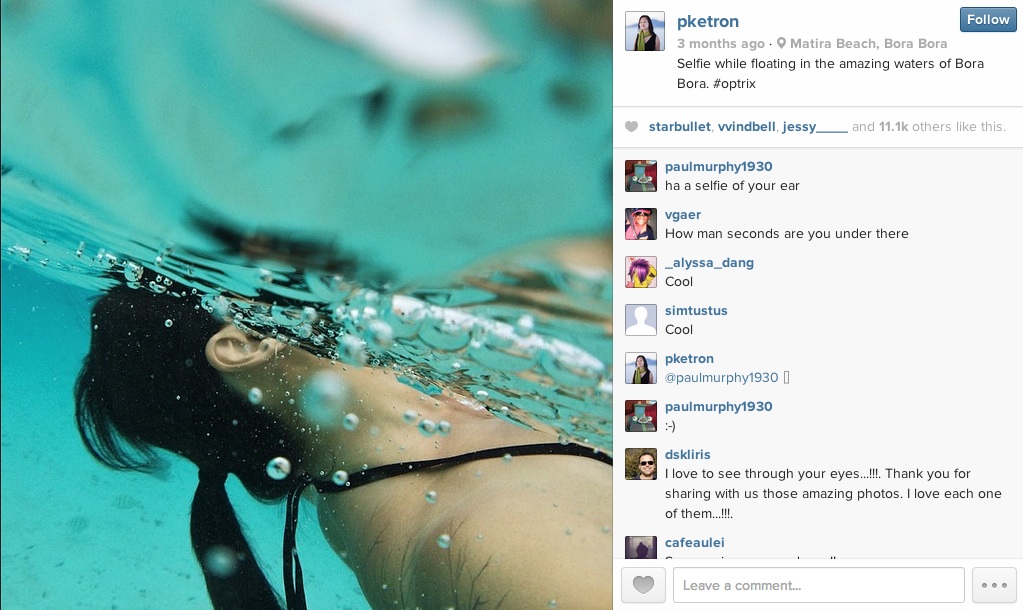 B. But No Filter Is The Best Filter. Zarrella looked at the average number of likes that filtered photos received. Willow came out on top, with Normal taking second place. And selfies tagged #nofilter saw a nearly 10 percent increase in engagement than selfies without the tag -- even though nearly one-third of #nofilter selfies actually did have a filter. Other high-contrast and high-saturation filters, like Toaster, Mayfair, Sutro and Hefe ranked highly, while Inkwell, Sierra, 1977 and Rise rounded out the bottom of the list.

C. Fine, You Can Use A Bunch Of Hashtags. If you really want to pander to the lowest common denominator of Instagram engagement (which, honestly, we don't advise; see above), tag your post with something like #follow or #likeforlike. Sadly, the cheap ploy seems to work, at least a little bit. Zarrella notes that selfies with the tag #likeforlike received 5 percent more likes than the average selfie. By the same token, the more stupid tags you tack onto a post, the more likes you receive.

Just don't tag your selfie #drunk -- that will net you 40 percent fewer likes, according to Zarrella. And rightly so.