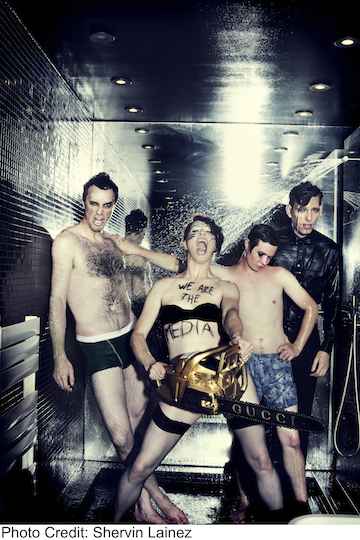 If you were going to sum up baroque queer rocker Amanda Palmer, you're too late. She's already beaten you to the punch. Her new album with the Grand Theft Orchestra, Theatre Is Evil, really kicks off with the epic second track, "Smile (Pictures or It Didn't Happen)." The parenthetical bit is shouted so often as to become bold and italicized by the song's finish. Palmer plays a busker at the end of the world, commanding her public to spend their last minutes on earth smiling for their iPhones.

The un-poor Mrs. Palmer has taken some flack recently for launching an apparently over-successful Kickstarter campaign, raising $1.2 million to record Theatre and recruiting local musicians as unpaid volunteers on her live tour. Criticism from Steve Albini recently awoke the wagging finger of the blogosphere, launching a thousand think pieces on the ethics of working for free. She has since agreed to pay her musicians.

It's easy to forget that there's an album behind all the social media mishigas. It gets lost behind Palmer's towering public persona. If you can turn a blind eye to her increasing cultural ubiquity, you will be rewarded, as Theatre both stands on its own and represents a career highlight for a musician who has tried just about everything.

The steampunk sexuality of Palmer's late duo Dresden Dolls has been replaced with the arch swagger of "Do It with a Rockstar." Offensive, Sarah Silverman-eque ditties like 2008's "Oasis" give way to the the album highlight, "Trout Heart Replica," which has the emotion and vocal gravel of Chelsea Girl-era Nico. The production is shockingly different from previous work, as well, successfully incorporating Palmer's theatrical leanings with high-synth accompaniment.

While it's easier to pull a tooth from the Corinthian than it is to keep Amanda Palmer off your Facebook feed, it's great to see her affect transcended by her music.

The following interview was done over the phone on Sept. 14th.

Your new album is called Theatre Is Evil, and it is your least traditionally theatrical release to date. Was this a coincidence?

The title was supposed to be a very ironic joke. My original name for the band [Grand Theft Orchestra] was Amanda Palmer and the Yale School of Drama. Two guys in my band just graduated from there. They vetoed it, for good reasons.

The stage show is, in some sense, highly theatrical. It's definitely not just a band in jeans playing rock and roll. But even if the title is supposed to be ironic, there's a pebble of truth in it. I think theater is a really evil box to be put in, especially since a lot of theater out there is just so horrible. I think the way we relate to theater, the way we define it, needs to be revolutionized. Theater, like a lot of art forms, is getting a bad rap, sometimes for the right reasons.

For a theatrical performance, which depends on being there live, do you think your at-home audience can still connect to the music?

I might argue that it isn't theatrical. I think [individual tracks] like "Berlin" or "The Bed Song" are among the most vividly theatrical I've ever written or put out, but the album is a grab bag.

I'd say it's more un-theatrical. There are no songs like "Oasis" where a very serious subject like rape is played out against a tinkly, musical-theater piano.

You can imagine it being played in a venue you might not have imagined with the Dresden Dolls. It's funny: After years of interviewing about Dresden Dolls, I found myself getting really deep inside the question, with many journalists, of: What do you mean "theatrical"? What is it about Dresden Dolls, me, bands, that makes you define them as "theatrical"? Is it music, look, stage show? If you slap the umbrella and lipstick on Bobby D, would he be theatrical? Even if it was the same song? Throughout time we've had fairly straight rock and roll bands that throw on costumes and makeup, and very theatrical, Broadway-sounding bands who wear no makeup.

The Doors to me are the most... There's barely a more theatrical sounding band out there, but they look standard for the era. Had they been playing in whiteface, actually looking like The Threepenny Opera, they would've been defined very differently. I'm fascinated by the cultural continuum, what happened in the '90s, when costumes and makeup went very out of style. Bands like Nirvana had theatrical sensibilities, playing with image, challenging assumptions people were making about them, the apex being Kurt Cobain in a dress to make a point. Now on the other side of the pendulum you have Lady Gaga, who is making very straight-ahead mainstream pop music, but she is theatrical to the other extreme.

Maybe you're as theatrical as you ever were, but you're being defined differently by your listeners?

It's up to public to define. My number-one goal is to never feel like I'm strictly defining myself. The minute I feel like I'm doing that as anything -- as theatrical, as feminist, as songwriter -- I feel like the minute I name it, I'm stuck in a box. I want to make shit up as I go along, and then everyone else can go calling it something.

Have you been getting any comparison to Nico with this record?

In "Berlin" I could definitely hear some Nico in there. She's got such a flat, throaty sound. It's so beautiful when laid in the correct context. The one thing I love about her voice, as I do with any singer, is the distinct lack of vibrato. Singers like Nico and Liz Phair, the ones with their vibrato switched off, are my favorites.

The sound of this album shifted dramatically toward synths. Why?

When I looked at the pile of songs that were going to be on this record -- "Do It with a Rockstar," "Want It Back," "The Killing Type" -- it was very clear to me that these songs were dictating a specific kind of production. I knew I needed to find a producer that spoke fluent New Wave, and I knew that John Congleton was that guy. I knew that the band had to share in the same psychic mind meld that John and I were in, as far as what the the synth lines needed to sound like in order to serve what these songs were asking for. Everybody nailed it. Everyone spoke the language, and the songs got what they asked for. Everyone was fluent.

What do you think the songs were asking for?

Every song had its own needs. In the case of a song like "Smile," I played the solo piano version for John in the studio one day a few months before recording. The minute he heard it, he said, "My Bloody Valentine," and I went, "Yup." And he went, "Swans," and I went, "Yup." No more was said, and we went on the the next agenda. It's why finding a perfect producer was key. John and I, we were raised on the same musical diet. I didn't need to send him a bunch of My Bloody Valentine and Swans songs to prove my point. He already knew the planet on which I wanted my rocketship to head. It was very different from song to song. "Killing Type" was the Cars and Gary Numan, "Grown Man Cry" was [Depeche Mode's] Violator and the Cure's Disintegration. It was clear from the demos, to us, where these songs wanted to head. It was our job to translate and try to get them to sound as authentic as possible.

Can you give me a quick response to what Steve Albini has been saying about you?

Poor Steve. He gets a bad rap. He's a passionate person with passionate opinions, and that means he's going to have to deal with a certain amount of grief in his life.