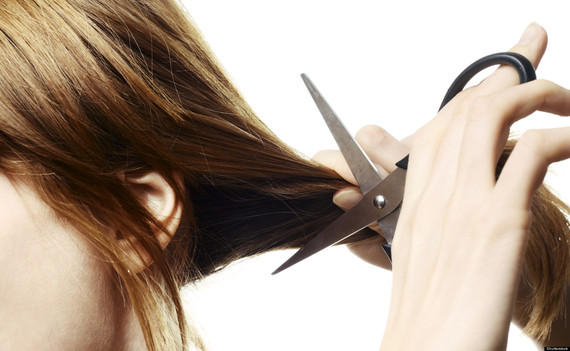 A week or so ago, I had four inches cut off my hair. Just like that. I was itching for a change. When the stylist asked me if I was "attached to the length," I said no, and waved her off in my best impression of the most well-adjusted woman on the planet.

When I left the salon, I felt as if I were missing something. I thought maybe I'd made a mistake. And guess who noticed? No one.

I don't say this to be all boo-hoo. Fact is, it was a huge relief. I chopped off hair the length of a baby's arm, and not a single person said, "Good GOD! What did you do?!" Nope. So when I asked a colleague if he thought I went too short, he said, "You got it cut?" Yes, I said. "You sure?"

My boyfriend, who knew I was going to get it cut, saw me a few hours later. My going from middle-of-back hair to shoulder-length barely moved the needle. When it came up in conversation with a girlfriend that I had recently gone to a new salon, she said, "Oh, now that you mention it, I did notice your hair looked nice and full."

It did, and does, look nice. It was a teeny-tiny and impermanent change. Just another drop in the bucket of thousands of hair cuts I have had and will have over the course of a lifetime. I was itching for a change, and I got it, and it was very much a personal experience because it affected not a single person other than myself.

I say this because you need to hear it. Because it's a huge fucking relief. So that you don't waste precious time fussing or panicking over this zit or your half grown-out bangs, the fact that you wore these shoes with these pants, whatever. It's not worth the crisis you think it is. Now, I'm all about the details and I'm hardly careless about how I look. But what a great weight off your shoulders when you're reminded that everyone else is so singularly focused and obsessed with themselves they wouldn't notice if you weren't even wearing shoes.

On a recent balmy September morning, I left for a meeting with a client in a new skirt and no stockings. I felt great...until I reached the subway station and realized I couldn't remember the last time I'd shaved my legs. I'm being serious. It's true—I rarely shave them, not because of any kind of statement but because I have next to no hair on them (don't be jealous, b/c I don't have much on my head either). But it had been a while and I felt some movement around my shins in the morning breeze that signaled that perhaps too much time had passed.

I quickly thought through my options: Stop at a Duane Reade? Buy a razor and race to the bathroom first, shave in the sink? Nope. That wasn't happening. I said to myself, no one on God's earth will notice.

And I was right. 100 percent. Did not matter. (I did shave them when I got home, however.)

Now. Would I make a practice of going out unshorn? No. But whenever you start to get strung up in thoughts about these little things, because you think They Say Something About You, you've got to hit the brakes. My boyfriend doesn't love me any less because I have four inches less of hair, and your date won't reject you because of a stain on your shirt, either. Yes, I have thought about doubling back to my apartment when I realized I hadn't put on mascara. But I didn't.

Guess what happened? That's right. A day without mascara that will vanish into the archives of time with nary a whimper.

Do not let the tiny details derail you. They don't matter as much as you think.

Visit territrespicio.com for more content like this + to sign up for my newsletter and receive a free copy of my e-book "Take the WORK Out of Networking," about how to make better connections in business and in life (it totally works for dating, too).