Congress declared August 26 Women's Equality Day 44 years ago in commemoration of the 19th amendment, which granted women's suffrage. Gaining the right to vote was one giant leap for womankind, but only one small step towards equality. Instead of a day of commemoration, I say we approach Women's Equality Day as a day of action to further our quest for true gender equality. 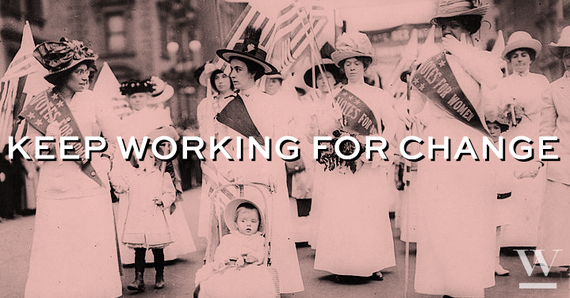 Many gender gaps still exist and many barriers hold women back. Ninety-five years after gaining the right to vote, women are still not paid equally for their work and the United States is one of only nine countries that doesn't provide paid maternity leave for working mothers. Despite now earning a majority of college degrees, women only make up about 5 percent of CEOs.

There are many issues that need to be addressed, but here are three existing gaps that we all should be working to close:

How long will women have to wait before Women's Equality Day will truly commemorate gender equality? At the Women's Foundation, we're working for change -- to close these gaps and remove barriers for women and their families. We've been advancing the cause of equal pay with elected officials and community leaders in Missouri, recruiting more women to local and state leadership positions, and working with researchers and policy makers to help further supportive policies in the workplace.

Someday soon, I hope that Women's Equality Day can commemorate more than women's suffrage. I hope that it can be used to commemorate true equality where women share the same chances and opportunities as men. Just like the struggle to gain women's suffrage, full economic equality won't come easily. We have to work for it. At the Women's Foundation we will continue to work for change. Will you help us?