Man-made risks -- such as cyber-attacks, climate change and terrorism -- have become so prevalent and severe that they now impact most everyone, as well as the ability of organizations and governments to operate with resilience and certainty. Such risks may no longer be referred to as anomalies with limited consequences, but are, rather, indicative of the costs associated with living in the Anthropocene Era, where the actions of human kind negatively impact the environment, and collide with natural risks. In this Era, where uncertainty and unpredictability are the norm, and organizations of all kinds are being challenged like never before, the need to make great decisions has come to transcend the profit motive, for firm survival is at stake.

Traditional organizational decision-making processes - which tend to entail linear, empirical, one-dimensional thinking -- have of course been widely used for decades, but have never before been put to the test with such transcendent and centrifugal forces tugging at its core. We have entered an era in which information boundaries have been erased, communication and money flows are instantaneous, and our infrastructure, cities, and even some countries face grave threats to their existence because of the pervasive threats of climate change, cyber risk, and terrorism. In such a condition, it should be clear to risk managers and leaders alike that conventional decision making may be insufficient in managing and staying ahead of such risks.

In addition to having to contend with man-made risks, the 'forced' regulatory transparency that has been routinely imposed on publicly-held organizations - particularly since the Great Recession - has had an adverse effect on decision making processes in large and complex entities. Enhanced compliance and governance guidelines have only added to the legions of employees devoted to compulsory forms of risk management, which have diluted the inclination of leaders to rely on their intuition. The resulting orientation toward risk-aversion, and the accompanying indecisiveness in determining the nature of unprecedented threats, can result in outcomes every bit as dangerous as many of the threats organizations are trying to understand and manage.

Against this backdrop, organizations face a staggering array of questions that must be addressed, such as, how can organizations adapt their decision making frameworks to create a more agile approach? Will the predominant consensus driven frameworks give way to a greater degree of instinctive or entrepreneurial approaches? Are these models size or velocity dependent? And, will decision makers feel free to move beyond their comfort zone in order to meaningfully address the risks? Many organizations - large and small - are struggling to answer these questions in a manner that sets the stage for boldly propelling them into the 21st century well prepared to resolve these issues directly and successfully.

The result is that the purchasing and investment decisions of the vast majority of decision makers - particularly in large organizations -- have fallen into a trap of 'decision avoidance' and complacency, which is contrary to both stakeholder interests and organizational resilience. By virtue of how large organizations have evolved over many years, decision makers have fallen prey to disconnected silos, with organizational fiefdoms being run as entirely separate profit, cost or decision making centers. Decisions are increasingly being made by committees, which completely dilute and diffuse accountability while progressing at a glacial pace. The more consequential or costly the decision, the higher the likelihood that the result will be to continue with the status quo or defer making a decision entirely. In effect, the decision making process may be considerably weakened and made ineffective by the combination of low risk awareness, a constant barrage of short-term information, and far too many 'leaders' opining over organizational choices.

Instinctive decision making, which is most commonly associated with entrepreneurs who are constantly walking the tight rope between success and failure, is rare in all but a handful of large organizations. The cornerstone for 'following your gut' decision making is a leader's innate conviction, belief in a given value system (corporate or personal), and comfort with making decisions in opaque conditions. The rise of corporate activism among a handful of firms supports this argument.

Activist firms hold their value system as paramount, even above the profit motive, taking stands -- such as Apple's stance against the FBI, or Starbucks' stand against campaign finance, and its controversial Race Together Campaign -- both of which could have been detrimental to their shareholders. Nonetheless, with intuitive leaders like Tim Cook and Charles Shultz at the helm, increasingly instinctive decisions are being made, often in the face of complex and potentially incalculable consequences. What drives these leaders and their choices appears to be a preternatural ability to make the right call, and do the right thing.

One of the best examples of this seemingly instinctive quality is how Apple defied its company culture of absolute secrecy and centralized control by publishing a deeply transparent supply chain report in 2007, and every year since. Facing mounting criticism and market pressure on its valuation over worker conditions at Foxconn, Apple leapt ahead of the potentially damaging news (and its competitors) and published an uncharacteristically transparent supply chain report providing a scorecard on how Apple's thousands of sub-suppliers faired against the company's desired performance standards, including worker rights and conditions.

Had Apple followed an empirical decision making approach, it may have looked instead at its competitors, such as Samsung, which provided no transparency into its supply chains or worker conditions. The assumption was that the world is an imperfect place, and running a global supply chain is necessarily an imperfect practice. Instead, Apple put its peers on notice and gained substantial competitive advantage by instinctively anticipating that the market would respond favorably to more transparency. Other firms are now grappling - often clumsily - to adhere to Apple's standard, yet Apple's culture of secrecy and centralized command remains as entrenched as ever.

Elon Musk, founder and CEO of SpaceX and Tesla, provides another great example of an instinctive leader. While building reusable rockets like Falcon 9 (which made a successful landing on a waterborne drone) clearly depends on a vast amount of empirical data, SpaceX, like Tesla, are clearly thriving due to Musk's stubborn commitment to his instincts and passion -- that humanity's fate depends on commercially viable space travel and the death of the internal combustion engine.

These examples demonstrate that instinctive decision making need not suggest that unintelligible decisions are made in the absence of data. Rather, the instinctive leader is able to make choices unafraid of course corrections. The advantage, amid so much uncertainty, goes to people and organizations the embrace the option to choose. This gives them agility and an almost innate ability to walk the tight rope between success and failure. It also gives them pause in the face of adversity or pressures that go against their value systems or commitments. Instinctive leaders tend to stick to their word, although they may make multiple course corrections in doing so. 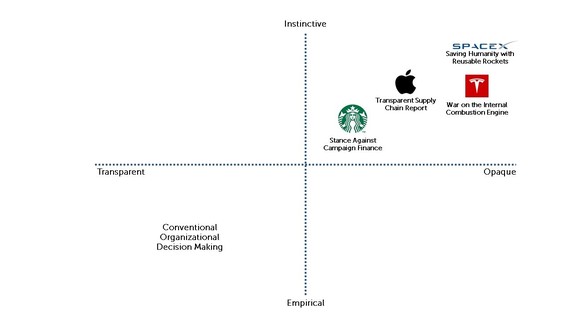 Intuitive leaders may weigh empirical data and consult with peers and colleagues in the process, but in the end, they rely on their sense of smell and gut feeling to guide their decision making process. There is no real secret to what makes a good forecaster -- it is a combination of a natural curiosity about the world, being informed, having an opinion, combining it with insight and instinct, and correcting course as necessary. More and more organizational decisions fall into a domain where little reliable information is available, or where a decision needs to be made faster than information can be reliably sourced, and the consequences are entirely unpredictable. That is when relying on instinctive decision making is really the only option.

No one -- no matter how experienced -- can know or anticipate precisely when a problem will arise. This is particularly true in the era of man-made risk. All we can do is make educated guesses based on what history teaches us, and integrate what we have learned in the process. In the end, the ability to anticipate what the future will bring, using a combination of knowledge, insight, and a healthy sixth sense, can make all the difference. Listening to your gut and sense of smell are, in the end, as important as all the other tools at one's disposal. Good leaders know when to follow their instincts.

Dante Disparte is CEO of Risk Cooperative. Daniel Wagner is CEO of Country Risk Solutions. They are the co-authors of "Global Risk Agility and Decision Making".