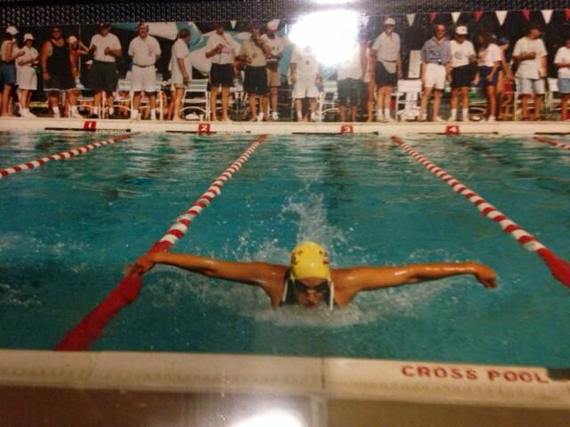 I was an awkward, skirted-suit-wearing 7-year-old my first day of swim team practice in 1984. My participation on a USA Swimming team improved my confidence, provided me with life-long friends, and helped me develop physical fitness that I still maintain today as a 37-year-old mother of four.

It was also in this context that I met my coach and rapist, Christopher Huott. He used his Maryland swim team to gain access to my family and groom me, a process which involved using the sport I loved to establish power and control over me. He then abused me for years. The abuse was so extensive that I had no memory of the crimes for decades.

Unfortunately, my experience is not unique. There are many criminals who have infiltrated youth sports with the sole intent of grooming and sexually abusing athletes. While these coaches are in the minority, they are out there, preying on powerless victims who trust them implicitly. They operate in environments where others' poor boundaries can normalize their grooming behavior.

The Duggars and their religious sect are not the only entities that perpetuate rape culture and contribute to a society that is more comfortable for perpetrators than victims. It is easy to look at their attitudes as some sort of societal aberration, but it is commonplace within many organizations.

My own experience as a victim was made far worse by the attitudes, policies, and beliefs I found within my sport's governing body on a national, local, and team level. There are several ways I was failed as a victim, beyond my perpetrators' crimes, but those failures shed light on important lessons that could spare victims the shame, pain and frustration I experienced.

First, victim-shaming has no place in youth sports. After I reported my crime to police, Chris was charged, arrested, and summarily banned from USA Swimming. The potential for other victims and the standing of my perpetrator in the community led to media coverage of the charges. Shortly thereafter, I was slandered by the owner of my coach's team who said my allegations were false and that I was a deranged middle-aged woman looking for a scapegoat for my problems. Deeply distressed, I reported this turn of events to USA Swimming, shocked that a team would attempt to retain athletes by impugning the character of a victim. USA Swimming said they did not have jurisdiction over this type of behavior at the local level.

Also after the arrest, Potomac Valley Swimming (PVS), the team's governing body on the local level and an affiliate of USA Swimming, immediately issued a statement defending the club and claimed, erroneously, that the scandal did not extend beyond the perpetrator when in fact, the owner's rhetoric discouraged other alleged victims from coming forward. It is hard enough for victims to report their abuse without the presupposition that they won't be believed or, worse, that they will be immediately discredited and shamed.

We do not live in a victim-friendly society, so it is not surprising that there is more information on USA Swimming's Safe Sport site about preventing false allegations than information about creating an environment in which victims feel safe reporting the crimes against them. This perpetuates a culture of shame and silence that only benefits perpetrators. This is particularly dangerous since pedophiles rarely have just one victim in their lifetime. The stakes are high. Timely reporting spares future victims.

Second, predators need to be held accountable for their actions independent of the legal action a victim may choose to pursue. Other professions -- including teachers and counselors -- have that layer of safeguard in place.

My perpetrator was almost immediately banned from USA Swimming, but banning coaches is only effective if there are consequences for noncompliance. My perpetrator continued to have access to his team after his ban. At his sentencing, a parent spoke on his behalf, citing Huott's generosity in giving his family a tuition reduction several weeks earlier (months after he was banned). I contacted USA Swimming on two separate occasions about this and was told that there are no codified sanctions for teams who allow banned coaches access to the team, but that it would be a good idea to consider in the future. Consequences would send the message that victims' -- and potential victims' -- safety and emotional well-being are a priority. It would also send the message that the organization is serious about eradicating criminals from their ranks.

Third, rhetoric and belief-systems that excuse and condone child rape and molestation have no place in youth sports, or anywhere else in society. The owner of my perpetrator's team called him a man of impeccable character after he had plead guilty to felony-level crimes of a sexual nature against a child. USA Swimming condemns child sex abuse, but on a micro-level, within its ranks exists a team whose owner and head coach does not view child rape as a disqualifier for good character.

Governing bodies for youth sports do not intentionally condone child sexual abuse, but there is much more they can do to protect children. It is time to build a more victim-friendly culture in youth sports and stop enabling pedophiles.

There are countless examples of these types of failures everywhere from swim teams to college campuses to schools to church communities. Its time to end shaming, predator-protection, and rhetoric and beliefs that say, "Raping kids isn't all that bad."

Child sexual abuse is not a mistake. It is a very serious crime with lifelong implications for the victim. It is time to make our culture a more comfortable place for victims than perpetrators.