"The Divergent Series: Insurgent" protagonist Tris Prior (Shailene Woodley) is physically strong, but she's not a stock "strong female character." Like actual human beings, she's a lot of different things at once -- tough and vulnerable, kind and cruel. In prep for today's release of the film -- the second in the "Divergent" book trilogy turned four-part blockbuster franchise -- The Huffington Post got on the phone with author Veronica Roth to talk about its "complicated, morally ambiguous" women, her recently announced upcoming young adult series, and the literary scene's contempt for genre fiction. (Mild "Insurgent" spoilers are ahead.)

The gender dynamics in the "Divergent" series are so much more realistic than those we're used to seeing in big blockbusters. Were you consciously trying to push up against stereotypes when you conceived the world?
I don't know if it was something in my head everyday while I was writing. But I am, of course, interested in seeing a wide variety of representations of women, and I find it fascinating to write about. It's definitely something that's important to me. I remember at a certain point in "Insurgent," when I was writing, thinking, like, "There are no men in this scene, and I love that." Not that I don't find men interesting to write about. But just that Tris was coming up against these kind of complicated, morally ambiguous people in her life. It was really exciting to write.

Yeah, we have to have the Bechdel Test to measure whether two women in a film speak about something other than men, because it's so rare. But to have scenes between Tris and Janine, or between Tris and Evelyn -- it's, like, oh, complicated realistic women who are the stars of the books and films.
It's especially wonderful to see it in the movie. Because it's Naomi Watts [as Evelyn] and Shailene Woodley. And then it's Kate Winslett [as Janine] and Shailene Woodley. Kate Winslett and Naomi Watts. Octavia Spencer [as Johanna] and Shailene Woodley. It's just like really hugely talented women and they are talking about things other than romance for extended periods. It's great.

You started working on the series when you were an undergrad in the creative writing program at Northwestern. College writing scenes are notoriously snobby toward genre, or any fiction that's not in the kind of traditional MFA program style. How was your work treated by your classmates and professors?
Well, I kept pretty quiet about what I was writing because of that stigma. I didn't even give them a chance -- I don't think I was terribly fair to my classmates in that way. Because some of the things that my classmates wrote about -- I remember one wrote a Western, and another one wrote a post-apocalyptic thing. So I think they were really receptive to genre fiction. But I still kept it under wraps, like "Ah, I'm afraid." What I wrote for the program was like realistic literary fiction.

So you kind of lived a double literary life.
Yeah! I had my alter ego. By day, literary writer. By night ...

Do you ever want to pursue that literary fiction writing avenue?
I think what I'm more focused on is applying the things I learned in that program to become a better writer generally, and do the genre fiction that I love. Nothing is better than when people are able to successfully marry those two things. One great example is Alaya Dawn Johnson who wrote The Summer Prince. God, that book is amazing. And she's such a great writer. And it's also sci-fi.

Why do you think that genre fiction or YA fiction is kind of viewed as less serious in the lit community?
There are a lot of theories about that -- I'm not sure. It's kind of like the same way that dramatic movies always win Oscars and not comedies, or that comedic actors are not seen as good actors until they do a dramatic role. I'm not sure why we do that. Negative emotions are not the only emotions that we have, and focusing on them to the exclusion of joy and humor and all those things is limiting our human experience in a really significant way.

I feel that way also about the way people reject young adult fiction out of hand. Like, are you really so hostile toward your youth that you can't understand how these struggles are universal? How you continue to have them as an adult, and how important it would have been for you to read something powerful at that age? I don't understand that hostility at all.

I'm also always confused by that hostility because people who feel that way were probably affected by fiction aimed at young people in their youth. But as soon as they grow up they're no longer willing to consider it.
Right, and a lot of the time I see that with people who aren't terribly compassionate towards their teenage selves. They're like, "Oh I was an idiot at that age." Like, no you weren't. You were young and you were still developing. It's okay that you said stupid things. Or that you made bad decisions. That's all right. And you're still making bad decisions now, I guarantee! You're a human being.

I was excited to see your new series announced. When you wrote the Divergent books you were so close to these teenage struggles we've been talking about just because you were so young. Are you finding it different to go back and explore young people's identity questions when you're a little more sure of your life path?
I think I do have to sometimes remind myself that maybe at that age I wouldn't have made this or that choice in that situation. I really try to focus on the character and what they've been through in their life and what they have yet to learn -- as opposed to thinking of them as kind of emblematic of a particular age -- and I think that helps a lot. But it is something that I think I keep in mind a little more than I used to, just making sure that I'm faithfully representing people of that age instead of being like, "You should be more grown up!" towards my characters.

What made you decide to write your next series from the point of view of a male protagonist?
Well, even though the pitch kind of focuses on one character, there are a few prominent characters in the book. So it's not just about him. But, I don't know. It's just a character that I've known for a while. I've been mulling it over for a long time. I'm not sure exactly why, he's just the one in my brain.

The series explores themes of revenge and redemption. I know you've had an interest in theology and I wondered if there was a connection between that interest and the theme of the series.
You know, if it's there, it's not really that conscious. I think the revenge part was really interesting to me, and it's especially opposed to my beliefs about morality. You know, revenge is the opposite of what I am for. But I think that's especially compelling because, kind of like we've been talking about, writing about complex characters who make decisions that you don't necessarily agree with is just really interesting. And finding ways to be sympathetic to those characters even though they're doing bad things -- or things that you think are bad -- it encourages compassion and empathy, and I like it.

You once said that one of Tris's major flaws was that sometimes she had a lack of compassion. Is she someone who believes in revenge?
I feel like she might, yeah.

That's kind of a big part of "Insurgent," about whether or not she's going to kill Janine.
I think it's definitely something that she, in particular, would question. But she's always got her parents in her head, telling her what's right and what's wrong. And I think that overrules her kind of crueler or more blood-thirsty aspects. She's always hearing them and she eventually listens. I think that when I was writing Insurgent, I knew that, like, parents conquer all somehow. Well, you know, for her in particular cause they sort of crystallize themselves as these perfect beings in her mind at the moment that they die. So that's something that she struggles with throughout the series.

Is it strange at all for you to occupy this kind of liminal space between author and celebrity?
[Laughs] I honestly don't think about it. The reason I laugh is because I cannot possibly think of myself that way. And I feel like you're not actually a celebrity until people recongize you in public and that doesn't happen. Which is great. But, you know it is an interesting time that we're living in right now because authors are more accessible than ever with Twitter and Tumblr, and all those things so people feel like they know you. And in a way, it has its challenges but I've really liked the way it shortens the distance between me and my readers. If we're like obsessively fan girling over "Harry Potter," then they know they're not that different from I am and I'm not that different from them. So we get to have a more sincere relationship, which is really great.

I know you have a big Twitter presence. Have you made any particularly impactful connections?
I think -- it sounds kind of silly -- but when we just have inside jokes. Like I tweeted a couple months ago about like, "Veronica is gone, only Blob remains," cause I was like wrapped up in blankets and jammies for like five days in a row. And I still have followers on Twitter who ask me how Blob is doing. I think that makes social media feel really fun and not like such a harsh place.

Veronica is no longer here. In her place is Blob. Blob is unproductive and lives in a cave of blankets, grumbling at passers by.

Are you fans of any new YA series that you think we should keep our eyes on?
Yeah! I am a greatly rabid fan girl of many series. Shadow and Bone [the Grisha trilogy] by Leigh Bardugo, and she's got a companion novel coming out called Six of Crows that's in the same world but it's not the same characters. And I'm just finishing up Daughter of Smoke and Bone [by Laini Taylor], those books are really excellent. Also, it's not a series but Alaya Dawn Johnson, Love is the Drug is out now, and I'm excited about reading that too. She's someone to keep an eye on. I think she's brilliant. 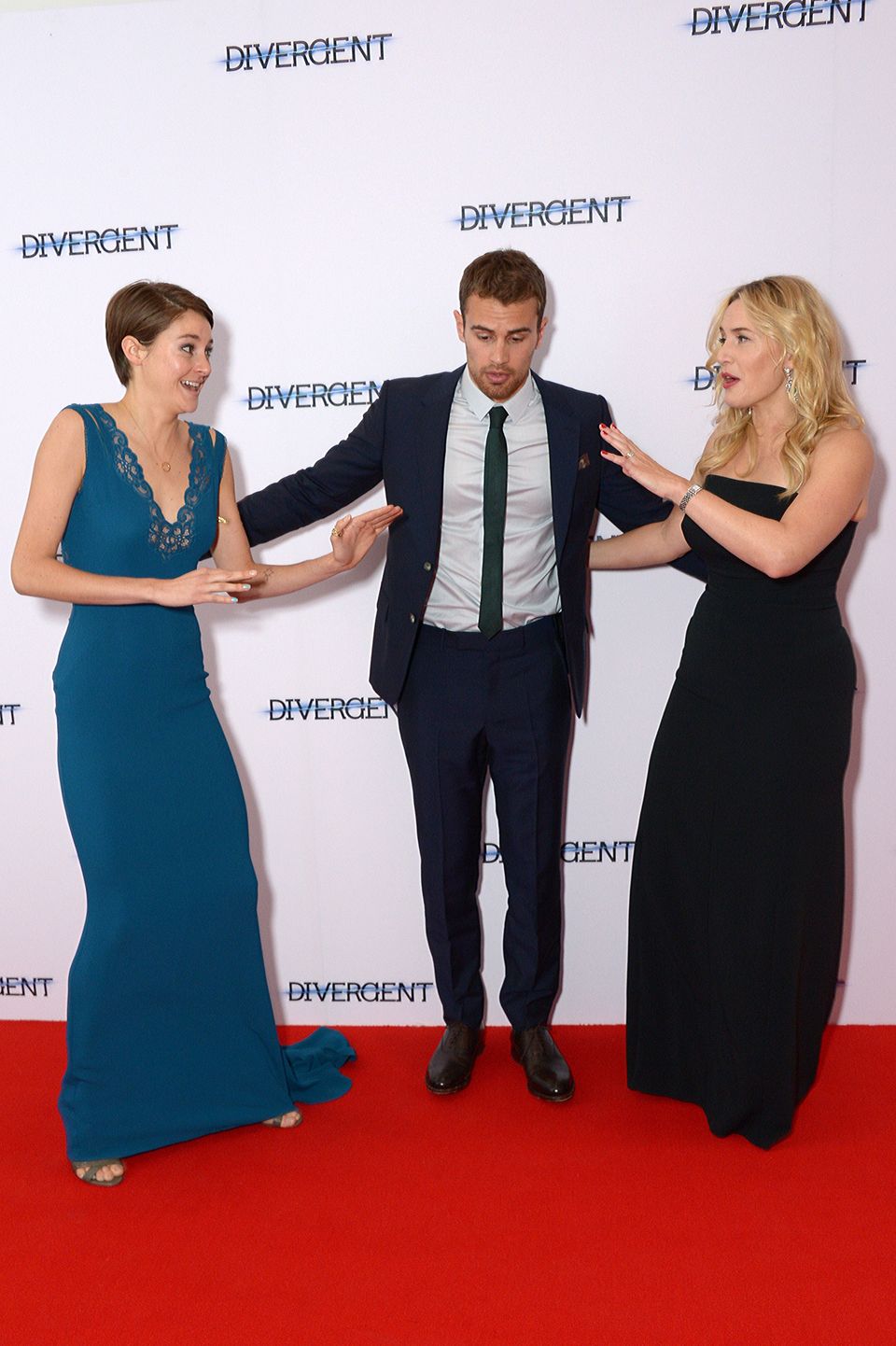