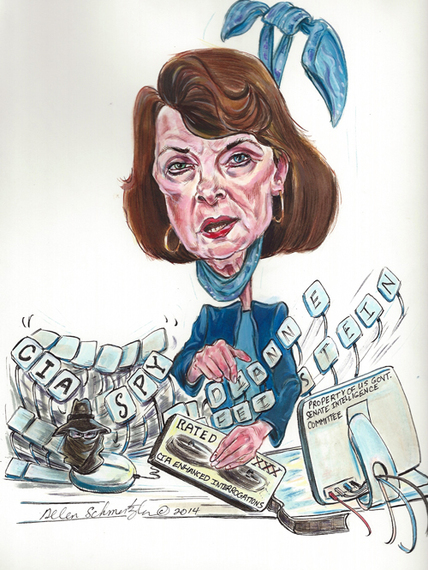 Marx couldn't write this "who done it" political spinster tale any better. Groucho Marx, that is. An almost farcical Orwellian Kafkaesque story masterfully textured with innuendo, word play, double speak, skillful theatrical timing of appearances, disappearances and delivering of carefully crafted lines cracking a peep hole into the dark world of surveillance. This is an abysmal abyss, an invisible spying universe forever shadowing human existence in its sticky web of digital networks.

This latest kink is but another kick in a long, twisted history that is neither the beginning nor the end of spying, and probably surfaced to pander to political winds. But what flavors this one as such a juicy subplot is the allegations made by the chairwoman of the Senate Intelligence Committee, Dianne Feinstein. Apparently those minding the spy universe, Feinstein and her committee, did a "black bag" job on the CIA that in turn crept around the dust inside her committee's computers to see what they saw of what the CIA was doing. The CIA Director John Brennan, despite his agency's checkered past, wants us to believe there is no way this happened. When the spying was on citizens, Ms. Feinstein was no friend and held firm in her staunch support of surveillance until discovering she was not immune. As the saying goes, "don't poke the bear!"

In the meantime, damning videos of President Bush era illegal enhanced interrogations of alleged terrorists have been vaporizing under CIA guardianship. All of this national security surveillance stuff, designed to allow us citizens to go about our daily business as usual, is making me insecure. It is no longer a question of who's the good or bad guy or gal to American's privacy rights in this unfolding political saga. We clearly have a totally excessive and out-of-control spying culture with systemic infrastructural malaise where Intelligence spies on spies on Intelligence.

What is known is it's a dangerous world -- always has been. A play for supremacy requires leaders to figure out how to stay ahead of the competition. Henceforth, spying. It is perhaps an even older profession than the "oldest profession." Around 500 B.C. the Chinese General Sun Tzu wrote in his famous The Art of War, "Enlightened rulers and good generals who are to obtain intelligent agents as spies are certain for great achievements."

In ancient Rome, the revered orator Cicero voiced concern over his letters being intercepted and in a letter to his friend Atticus he wrote, "I cannot find a faithful message-bearer. How few are they who are able to carry a rather weighty letter without lightening it by reading." Roman Emperor Julius Caesar was also known to have built an elaborate spy network to stay ahead of various plots against him. Which ironically proved to fail him. In the Middle Ages, the Roman Catholic Church was the supreme power and employed a powerful surveillance network to protect its interests.

In the Homeland, America, spying has been a fact since the Revolutionary War. As the nation grew westward, so did spying. From Western Union, the Internet of our Wild West history, there exists a factual record of breaches of privacy and networks of spying. By World War II, the United States embraced the surveillance business by monitoring all telegraph information coming into and out of the country, and created a "watch list" of U.S. citizens suspected of "subversive" activities. Such watch lists have existed since and contains an amazing index of beloved who's who. Dianne Feinstein is in great company.

So, not much has changed. The real change over the course of history is how government's spying strategies have morphed as it has absorbed changes in communication technology. Currently, the Internet has facilitated the concentration and ease with which information gathering occurs.

It is not only all appendages of government, but public and private corporations as well that are actively or passively partners in surveillance and information gathering. The quest to profile for either monetary or political gain is here forever. Many consumer products, from handheld smart devices to cars and smart homes have enhanced capabilities to turn our inner world over to the metadata highway.

There was a more innocent previous life of mine when I could actually pardon my angst over domestic spying by faithfully holding onto the enduring and omnipotent Bill Of Rights, and applaud the daring of whistle blowers. Unfortunately, I now accept in a quasi-numb state that there exists a grand canyon full of contradictions between lofty moral sounding platitudes of who we believe we are as a people and the sour bitter reality at the seat of power. I would favor and love this society even more if the same vital resources of an Intelligence Committee, intelligence community and intelligence gathering were about real intelligence, education, that fuels people's capacity to navigate our universe as self-actualized. However, the Dianne Feinstein revelations point to a very different temper.

We might as well relax, definitely stay vigilant, (it can't hurt) enjoy the show and always remember, "Look over there, see it? Smile, you're on digital camera!"